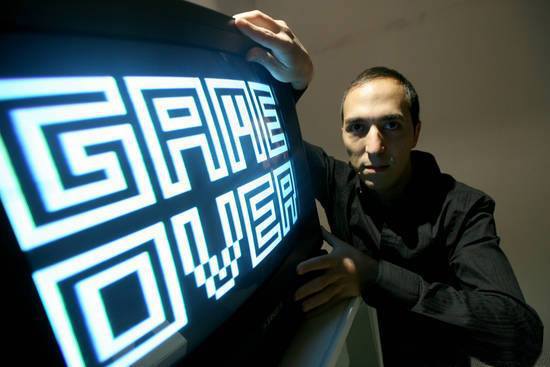 Ever since he was young, Yucef Merhi has shown a profound understanding of the digital world rising around him and an innate ability to combine it with art. One of the best examples of this comes from the beginning of his 30+ year journey in the industry. In 1988, when Yucef Merhi was only eight years old, he reverse-engineered his ATARI 2600 turned it into a programmable computer. However, even at such a young age, he wouldn’t stop there, as he used the Atari Video Computer System to produce generative videos based on language instructions. Already he was taking ideas and products associated with a functional digital realm and applying them to broader linguistic and artistic concepts.

Yucef Merhi would continue his work, doing amazing things such as calibrating the atomic clock of Venezuela at 9 years old while continuing to hone his digital expertise and combine it with other concepts from poetry to protesting. His work would quickly be recognized as some of the most influential in his field. Yet, only in a short amount of time would it come to be exhibited at locations such as the New Museum in New York, among many other famous international exhibitions. His latest exhibition at the Bonnier Gallery comes from this long and fruitful career, which presents 15 works from five different series created by Yucef Merhi.

The themes which Merhi tackles in these series are almost as expansive as his technical and artistic abilities. Still, he can explore ideas and subject matter that are shaping the world as we speak because of the digital format he can exploit to its fullest. These works include pieces that engage with subject matter such as facial recognition, artificial intelligence, virtual reality, hacking, and even retro video games, giving many of us a glimpse into how these will affect us or are already affecting us.

Alongside the opening of this gallery is the news that Yucef Merhi was chosen for the MIT Open Documentary, one of a select few to be involved, and it’s clear from those involved in the program how genre-defining Merhi’s work is. According to William Uricchio, the Founder and Principal Investigator of the MIT Open Documentary Lab, “Yucef Merhi has an impressive record as a border-crosser, a path-breaker, and hacker-extraordinaire.” It’s these qualities that enable Merhi’s work and involvement in subjects such as hacking so complex and interesting.

For this particular MIT fellowship, Merhi will research how to reduce electronic waste from obsolete technologies by repurposing them as new devices, whether it’s a whole new product or an art installation. As we can see by his background with repurposing ATARI, his previous skills should more than suit him for this type of task.

Whatever project he pursues, Yucef Merhi is always pushing the limits and creating new frontiers. Whether it is his ATARI Poetry, No Fly Security Datagrams, Electronic Waste Project at MIT, or even his noble work to build up his home country of Venezuela, he has created new artistic avenues and fields in which others can work as well as inspired others to work for positive cultural change. So it’s certainly worth it to see his unique works at his Bonnier Gallery Exhibition, and one should always look out for Yucef Merhi’s next project.

TV One Wraps Its Month Of Love, Lies And Murder Movies...