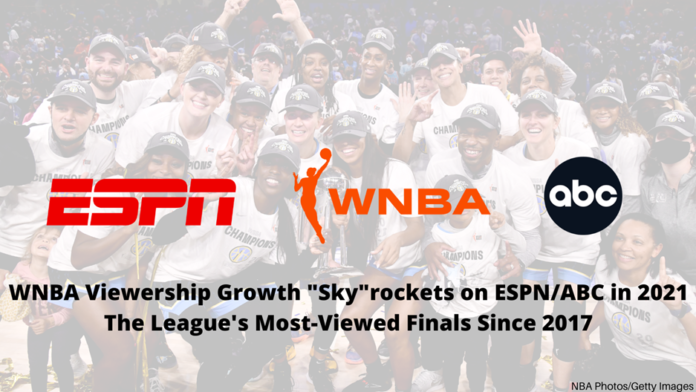 ( ENSPIRE Feature ) After Consistent Viewership Growth, the Chicago Sky Claim the Title With the Largest WNBA Crowd in History

The WNBA recently finished its stellar 25th season with an epic clash between the Phoenix Mercury and the Chicago Sky, resulting in a hometown hero story as Candace Parker returned to Chicago to lead her team to victory in the finals. Each game in the final series was a thrill in its own right, but it was exciting to see the Chicago Sky come back from a huge deficit late in the 4th quarter to overcome the Mercury and claim the championship. These types of exciting, talented, and back-and-forth games are the ones that led to this season of the WNBA being one of the most highly viewed ever, both in the regular and postseason, again showing a positive direction for the WNBA’s future.

The legends that currently comprise the WNBA like Diana Taurasi and Candace Parker alongside up-and-coming stars such as Breanna Stewart and A’ja Wilson point towards an even brighter future for the WNBA, with bigger fanbases developing and appreciating the league and its talented players. With regular-season viewership up 49 percent year-over-year, WNBA Viewership shows no signs of slowing down as the league continues to become more popular.

By all metrics, WNBA Viewership is increasing in all the most important areas. With the regular season, the 2021 WNBA season averaged 306,000 viewers, which is a 49 percent increase over the 2020 regular season. The 2021 season was home to the most-viewed regular-season game since 2012 when the Chicago Sky faced the Seattle Storm on August 15th, averaging 755,000 viewers. Four other games reached the same benchmark of passing the previous 2012 record but were quickly surpassed by the Chicago Sky and Seattle Storm game. Regardless, the extra consistency in increased regular-season WNBA Viewership shows that this upward trend in viewership is more than just a one-off event.

Despite Covid-19 throwing a wrench in many of the WNBA’s plans in recent years, the WNBA has stayed strong in both viewership and commitment to its players and community. However, with ratings consistently going up in both the regular season and the postseason, it will indeed become a matter of inertia as the WNBA picks up an even wider audience and sponsors that can appreciate the talent and commitment of its remarkable players.

Kenya Barris Says He Wrote a Part for Dave Chapelle in...

The String Cheese Incident Surprise Released their New EP ‘Into The...