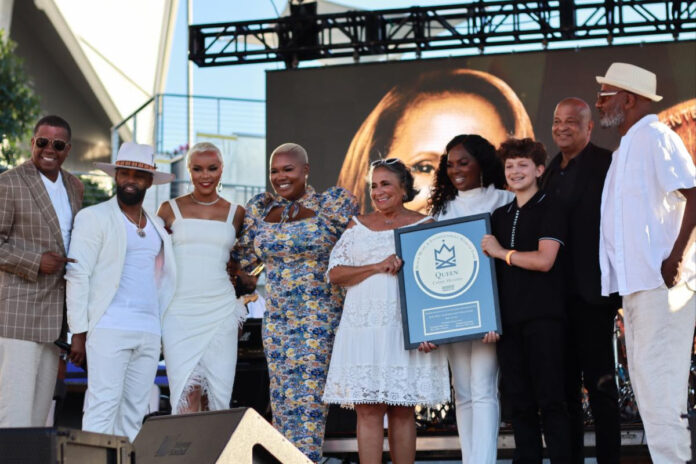 On Saturday, June 18, 2022, Urban One founder, Cathy Hughes, was inducted into The Black Music and Entertainment Walk of Fame (BMEWOF) during its Juneteenth celebration in Atlanta. Hughes is not an official member of the Crown Jewel of Excellence Black Music Month Class of 2022. The Walk of Fame is a joint initiative by the Black American Music Association (BAMAssoc) and Georgia Entertainment Caucus (GEC). The Black Music Month Induction recognized and honored pioneering artists, entertainers, and visionaries who have positively impacted both Black culture and the community at large. In May, BMEWOF founders Catherine Brewton (GEC), Demmette Guidry (BAMAssoc), Erica Thomas (GEC), and Michael T. Mauldin (BAMAssoc) announced the name and categories of this year’s Black Music Month Class of Inductees, which included the late Prince as a Legacy Inductee. As an ode to Prince, the closing ceremonies ended with a fireworks show, featuring one of Prince’s biggest hits, “Let’s Go Crazy.”

The induction ceremony was a family affair for Hughes. She had the honor of being inducted by Alfred C. Liggins III, her son, and CEO of Urban One, Inc. “I am very proud to be here today to induct my mother, the founder, and chairperson of Urban One, into the Black Music and Entertainment Walk of Fame,” said Liggins before passing his microphone to his son and Hughes’ grandson, Charlie Liggins, for a shoutout to the city of Atlanta. “On behalf of my grandmother Cathy Hughes, I’d like to thank the Black Music and Entertainment Walk of Fame for honoring her with a star. Keep listening to Radio One. We love you Atlanta.” The elder Liggins finished the induction with gratitude before handing Hughes her award, “With this, I would like to present this plaque, which represents the star of the Black Music and Entertainment Walk of Fame, to my mother, Cathy Hughes. Thank you to the founders of this incredible organization and thank you city of Atlanta.”

In a short, lively acceptance speech, Hughes paid tribute to the founders of BMEWOF, fellow inductees, and Atlanta. “First and foremost, let’s give praise and thanks to God from whom all blessings flow. Let’s hear it Atlanta for God. We thank you dear God. We could have been anywhere else but we’re here today in unity and love celebrating not only the Black Music and Entertainment Walk of Fame but Juneteenth. Let’s hear it. You [Atlanta] are the Mecca of Black excellence.”

Saturday’s induction comes less than a year after she was inducted into The Baltimore Sun’s Business and Civic Hall of Fame and just two years after she was recognized by Congress for her lifelong, trailblazing work in media. The 75-year-old Hughes began her media career over 50 years ago at the Omaha Star newspaper in Omaha, Nebraska. Shortly after she started a role in radio at KOWH, Nebraska’s first radio station, working there briefly before moving to take a job as an administrative assistant and lecturer for the School of Communications at Howard University in Washington, D.C. At Howard University, Hughes rose through the ranks to become the General Sales Manager of the university’s radio station, WHUR-FM. Hughes had a storied career at WHUR-FM, becoming the first woman vice president and general manager of a station in Washington, D.C. During her time at WHUR, she introduced the nation to the iconic “Quiet Storm”, which is still utilized today.

After nearly a decade at WHUR, she purchased 1450 WOL-AM in 1980, hosting an urban talk format and laying the foundation for what would become Radio One. A couple of years later she acquired nine additional radio stations, totaling ten stations. In the 1990s, Hughes continued to soar, becoming the first Black woman to chair a publicly held corporation while expanding Radio One with the accumulation of 60 different gospel, urban, and talk radio stations, with her son Alfred Liggins, III as her business partner. Radio One grew to include TV One, a linear cable network, in 2004. iOne Digital, formerly known as Interactive One, was launched in 2007. Now Radio One, is a subsidiary of Urban One, Inc., the parent company of iOne, One Solution, Radio One, Reach Media and TV One.

BMEWOF’s official press release for the event stated, “With a national and international appeal, the BMEWOF will acknowledge, preserve, respect, and inspire the Black creative community for generations to come.” Previous Foundational inductees include Cicely Tyson, Quincy D. Jones, Berry Gordy, Stevie Wonder, Smokey Robinson, James Brown, and Otis Redding. The Crown Jewel of Excellence emblems for the inductees of the BMEWOF is permanently installed on Martin Luther King Jr. Drive, in front of the Mercedes-Benz Stadium in Atlanta.

Alicia Keys Says Her White Mother Was Too Often Mistaken For...