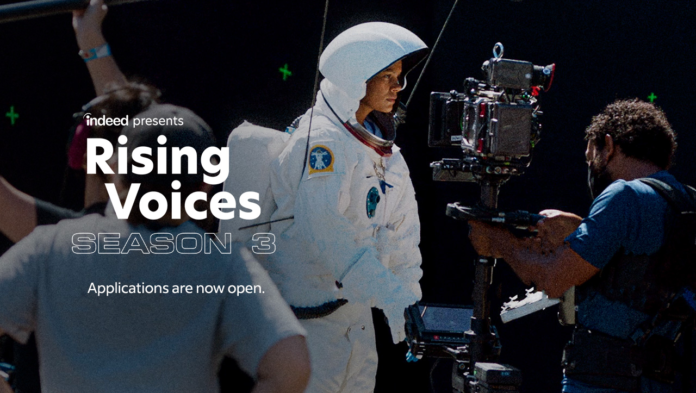 Indeed, the world’s number one job site announced the launch of Indeed: Rising Voices Season 3. In partnership with Emmy Award-winning writer, producer, and actor, Lena Waithe, and her company, Hillman Grad Productions, as well as 271 Films. Indeed: Rising Voices was created to invest and accelerate careers for Black, Indigenous, and People of Color (BIPOC) filmmakers across the U.S. Each year, executives from Hillman Grad, 271 Films, and Indeed review and select 10 finalists for the Rising Voices program. Once again, Indeed is investing $3 million in Rising Voices and will be accepting submissions from BIPOC filmmakers across the United States.

“Partnering with Indeed for the Rising Voices initiative for the past two years has been beyond rewarding and we are so proud to be back for a third time,” said Lena Waithe, Hillman Grad Founder, and Rishi Rajani, Hillman Grad CEO. “Creating opportunities for underrepresented BIPOC creators in Hollywood is our mission, and we are forever grateful to Indeed for their partnership which allows us to empower the next generation of great storytellers.”

Indeed will give each of the 10 chosen filmmakers up to $100,000 to produce their film which will debut at a New York City film festival. In addition, Lena Waithe, will mentor them executives at Hillman Grad and 271 Films, run by sisters Constanza and Doménica Castro. The filmmakers will be compensated $5,000 for writing an original script and $5,000 for directing.

This year’s initiative will focus on the theme Future of Work, and communities throughout the U.S. Workplaces continue to evolve as employers and workers adjust to the fundamental changes in work over the last few years. Employees’ expectations of their employers have shifted, placing heavy emphasis on their well-being and company values. Indeed’s mission is to help all people get jobs, connecting millions of people to new opportunities. Indeed, Hillman Grad and 271 Films will empower the filmmakers of Rising Voices Season 3 to show what the future of work looks like to them and the world around them.

Checkout more of Indeed: Rising Voices Season 3 and the Future of Work with this application video

LL Cool J Came Out and Showed Support To His 15th...