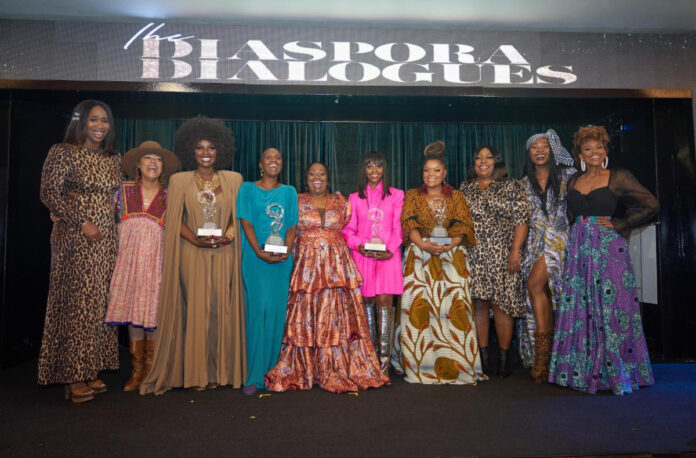 The Diaspora Dialogues 3rd Annual International Women Of Power Luncheon took place on Saturday, March 7th in Los Angeles.  It is an unmatched platform and space founded and Executive Produced by Koshie Mills, to bridge the gap and connect Africans in the continent with its global descendants in the diaspora. The power of excellence was displayed in the entertainment quality and program. Illustrious women of power and inspiration came from Africa, West Indies, UK and other parts of the globe to attend the event. The diversity of black women in the room created a magical environment of inclusion, hosted by veteran Author, Comedian, Co-Host of “The Real”, Loni Love.

The star-studded event commenced with an Ancestral Welcome and Affirmation led by the illustrious Host Loni Love. The declarations and sounds of “I AM A DAUGHTER OF THE SOIL…I AM A SON OF THE SOIL permeated the air and set the tone for the palpable love, camaraderie and positive energy in the ballroom. The standing-room-only crowd was a testament to the need and the reason why Founder Koshie Mills created a space where black women can connect and see each other as a global force.

SPIN INK Donates Over 175,00 Masks to Frontline Workers in Toronto

This is America – Jim Crow for the 21st Century