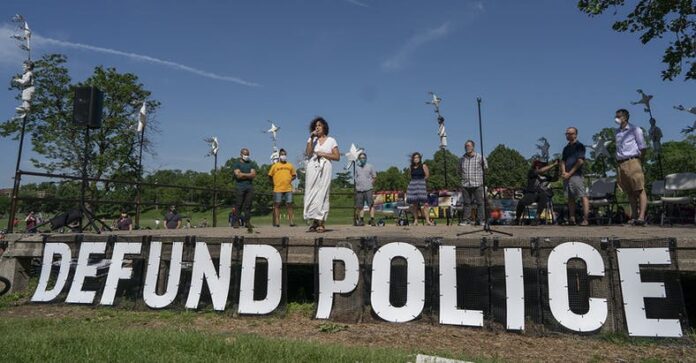 ( ENSPIRE News ) Across the U.S. We are in a Period of ‘Civil Strife’, Calls to “Defund” or “Dismantle” Police Departments

The Minneapolis city council has vowed to disband the city’s police department. The plan, ultimately, is to replace it with a new system of general public safety. This a very historic moment, across the United States, because this is officially the first dismantling of a police department following the death of George Floyd. These calls to defund law enforcement have happened across the country and the mayors of Los Angeles and New York City have made it clear those are their intentions.

To begin, it is important to discuss the ongoing situation in Minneapolis. On June 12, the city council in Minneapolis had unanimously decided to pass a resolution that would effectively replace the police department with a “community-led public safety” program. This was reported by Reuters and this is monumental. They have altogether disbanded the city department and this is completely different than what other cities want to implement like Los Angeles and New York City.

Defunding the police isn’t rocket science and it isn’t an in-depth concept that requires a lot of thought. Quite simply, it means taking funds from police forces across the United States and allocating them to other programs that can address issues within a given community. This doesn’t mean abolishing the police as a whole and this point is very often misconstrued.

In most cases, police forces’ budgets are allocated by county or city legislators within a yearly budget that they create. Ultimately, the final say in if they are getting funded are these local-level officials many people don’t even know of. Defunding the police is as literal as it sounds because they would, literally, get these funds and the excess funds would be allocated to other viable social programs across counties and cities.

“It’s not just about taking away money from the police, it’s about reinvesting those dollars into black communities. Communities that have been deeply divested from, communities that, some have never felt the impact of having true resources. And so we have to reconsider what we’re resourcing. I’ve been saying we have an economy of punishment over an economy of care,” stated by Patrisse Cullors, a co-founder of the Black Lives Matter movement.

To reiterate, dismantling and defunding police forces are two separate things that are being seen as viable alternatives to police departments. Police have routinely abused the power they have and they, predominantly, target and disadvantage members of the black community across the U.S.

These moves across the country are changing daily and cities have reacted differently. As of right now, we have two cities, NYC and LA, with intentions to defund their departments and just one who is going to dismantle it throughout the following year in Minneapolis.

This move to dismantle the department in Minneapolis has illustrated the concerted efforts across the U.S. to make policing reforms. Defund and dismantle are two distinct things and it will vary depending on the city and state but this is a step in the right direction, undeniably. These changes are necessary and should not be feared but welcomed with optimism for a brighter future. In closing, defund the police.