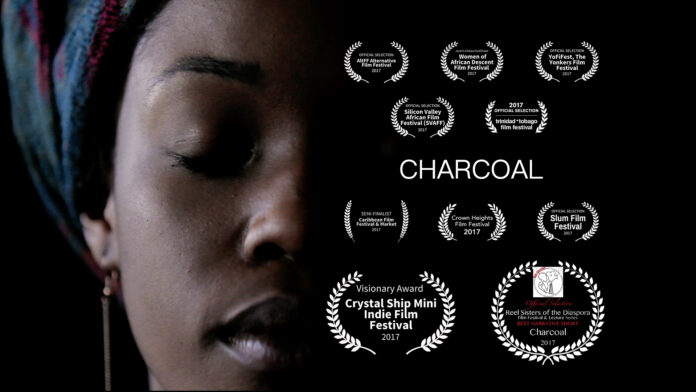 Francesca Andre is an award-winning filmmaker and photographer based out of Connecticut and Jersey City. Her passionate photography, which has been showcased in the New York Post, Afropunk, Daily Mail, Ebony Magazine, and Forbes, intimately captures the identity and beauty of her subjects. She brought her talents and artistic style with her in the creation of her short film, Charcoal (2017), which has been praised for its expert tone and authenticity in addressing the incessant and generational troubles that Colorism has inflicted on communities of color.

Despite its 5 minute run time, “Charcoal” has much to say. The movie follows 2 dark-skinned women’s lives, from their youth receiving societal messages telling them that they are unworthy because of their natural skin tones, to their adulthood search for self-acceptance. Andre’s film stresses that the healing process and the generational cycle of Colorism, both of which tend to be overlooked in contemporary conversation. For example, one of the character’s insecurity about her skin color manifests in anxious anticipation of the color skin that her child will have.

Colorism is the practice of discrimination by which preference exists for lighter skin individuals. This legacy of colonial slavery has lived on through hiring practices and contemporary cosmetic advertisements that still adhere to white beauty standards.  “Charcoal” was born out of the desire to spark more dialogue about this product of racism and still 3 years later, black celebrities like Lupita N’yongo have been stepping forward with their own experiences dealing with skin-toned based discrimination.

We were able to ask Franscesca Andre a few questions:

What moved you to select the medium of film? What obstacles did you face as a short filmmaker with a big message?

I have a background in photography so the next natural step for me as a creative was film. I wasn’t sure if I would be able to convey the message/tell the story effectively in under 10 minutes but that’s when creativity, writing and producing comes in. I wrote, directed and produced it so wearing all these different hats were beneficial and having my husband Gustavo Azael Torres who I worked close with as the editor was also a big plus.

How did your experience as a photographer permeate into the film?

When it came to how I chose to DP (direct photography) the film , the angles, the tone – I can say my photographic background was definitely an asset. As far as being the producer, I knew I wanted to work with Chengu Kargbo, the principal actress in the film as I believed she was the right fit in terms of talent, look and energy.

What keeps you busy these days? Do you have plans to revisit the subject matter of Colorism in film or photo form given recent beauty and Black Live Matter conversations about skin-toned based discrimination?

I am writing, working, doing photography, light public relations work and busy being a mom to a wonderful prince. I do have intentions in addressing colorism in a much deeper way – I hope that God and the universe conspire with me on a documentary in the near future.

What keeps this film’s subject matter pertinent to this day?

It’s a relevant topic just like racism. These two are deeply intertwined and as much as we are living in a racist world, we will continue to face issues such as colorism.

To keep up with Francesca Andre’s work, be sure to visit her website, which showcases her photography, as well as further information about Charcoal. Andre has contributed bounds to the conversation on colorism and the need for generational healing, and ENSPIRE looks forward to what she has to say next in this important conversation about the necessity for redefining both societal and personal beauty standards.

Paola Proctor’s New Single and Music Video “How Can I” Encourages...