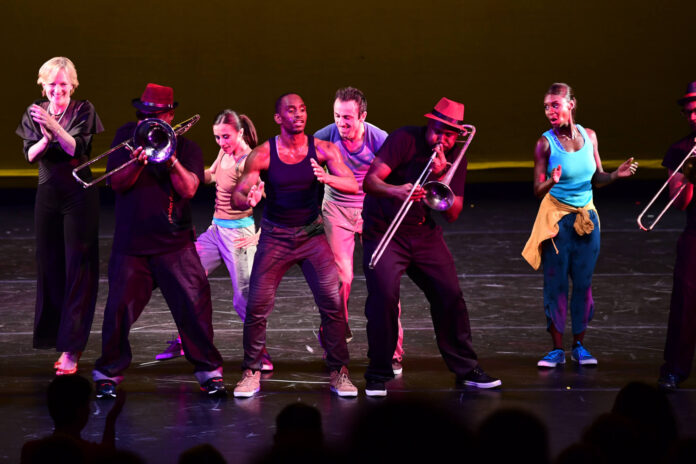 Award-winning choreographer and Artistic Director Diane Coburn Bruning founded Chamber Dance Project, Washington DC’s premier contemporary ballet company, upon her conviction that dance should be a collaboration between dancers and musicians and that when artists share the creative process with audiences, it deepens the audience’s experience. The company commissions and performs new and contemporary works by outstanding choreographers and composers in collaboration with dancers and musicians (who appear together on stage).

In past years, CDP performers shared their creative process with open rehearsals; this year’s virtual season aims to provide the same connection between audience and artist. Most ballet companies in the U.S. offer only a 35-38-week contract. Chamber Dance Project hires its dancers during the January and June-July lay-off periods common with other companies, bringing dancers virtually from all over the country to work in DC.

Chamber Dance Project is supported by the National Endowment for the Arts, Bloomberg Philanthropies, DC Commission on Arts and Humanities, KPMG, The Share Fund, The Morgan Fund, and the Nora Roberts Foundation. Chamber Dance Project welcomes the public to view a virtual open rehearsal of a new duet by Christian Denice—a part of his larger work, “Dwellings”—on Wednesday, Oct. 21st at 5 p.m., over Zoom.

Denice will create the duet on dancers Grace-Anne Powers and Austin Powers in preparation for Chamber Dance Project’s 2020/21 season. This is an intimate evening with the artists who shape the project’s distinctive profile and will provide a preview of upcoming works and a conversation with audience members—wine and cheese optional.

There is also a members-only virtual open rehearsal on Thursday, Oct. 22nd, at 5 p.m. that is free to members. Additionally, members can join the Chamber Dance Project for their newest virtual series, Great Works. Over the next four months, Bruning will host a members-only ballet film club featuring the most influential ballets in the last hundred years. Participating members will be given a video link at the beginning of the month, along with some historical background to watch and review. Then on the third Thursday of the month, members will come together with Bruning to discuss the ballet and its impact.

Christian Denice is in his first year with the Chamber Dance Project. He has worked with Odyssey Dance Theatre, River North Dance Chicago, Company E, Montgomery Ballet, BODYTRAFFIC, the Cambrians, and Les Ballets Jazz de Montreal. Christian has spent the past two years on faculty with the Joffrey Academy of Dance and Hubbard Street Dance Chicago’s HS Pro Program. As a choreographer, he has created new works for Odyssey Dance Theatre, LEVELdance Chicago, DanceWorks Chicago, Interlochen Center for the Arts, METdance too, Eisenhower Dance Detroit, and more.

Denice is the 2015-2016 winner of the University of South Florida’s Echo Choreographic Competition and the 2016 winner of the Joffrey Academy’s Winning Works Choreographic Competition. In April 2016, Christian directed and choreographed a short dance film entitled “the watchers” filmed by Salt Lake City-based videographer Bryce Johnson. He is a certified Power Vinyasa yoga instructor and teaches for CorePower yoga. Recently, Christian had the opportunity to re-stage KOSMOS by Andonis Foniadakis on the dancers of the National School of Dance in Athens, Greece.

Austin Powers is in his first season with Chamber Dance Project. He is a native of Portland, Ore., began his ballet training at the age of 5. He trained on full scholarship at Houston Ballet Academy, San Francisco Ballet School, Alonzo King LINES Ballet School, the Center for Movement Arts, and the San Francisco Conservatory of Dance.

Mr. Powers began his professional career in 2014 as a trainee with Ballet San Jose, and the following year was a silver medalist at the Youth America Grand Prix competition. He joined BalletMet in 2015, where he has been performing for 5 seasons.

He has danced original choreography by Cooper Verona, Myles Thatcher, Edwaard Liang, Matthew Neenan, Dalia Rawson, Mads Eriksen, and Grace-Anne Powers. Some of his favorite roles have been Tybalt in Edwaard Liang’s Romeo and Juliet, 18+1 by Gustavo Ramirez Sansano, Interplay by Gerome Robbins, Symphonic Dances by Liang, Fool’s Paradise and After the Rain by Christopher Wheeldon, Cacti by Alexander Ekman, and Herr Drosselmeyer in Gerard Charles’ The Nutcracker.

He has also collaborated with his wife, Grace-Anne, to choreograph and dance several works for San Jose’s Commons arts festival, and the original production of Amahl and the Night Visitors for Opera Project Columbus.

Grace-Anne Powers is in her first season with Chamber Dance Project.  A Pennsylvania native, she is currently an artist with BalletMet. She began her ballet training at Central Pennsylvania Youth Ballet and continued her studies at The Art of Classical Ballet in Pompano Beach, FL with Magaly Suarez. Prior to joining BalletMet in 2015, she was a dancer at Ballet San Jose, a soloist at La La La Human Steps in Montreal, and a principal soloist with the Cuban Classical Ballet of Miami. She has performed a large repertoire of principal roles in the classics including Giselle, Swan Lake, La Bayadere, Don Quixote, Sleeping Beauty, Romeo and Juliet, Carmen, Esmeralda, Raymonda, and Le Corsaire, among others. With La La La Human Steps, she performed in New Work choreographed by Edouard Lock, which premiered in Amsterdam in 2011 and then toured internationally for the following two years.

She has also had the pleasure of dancing works by George Balanchine, Jerome Robbins, Edwaard Liang, William Forsythe, Twyla Tharp, Ohad Naharin, Paul Taylor, Val Caniparoli, Dwight Rhodin, Yuri Zhukov, Amy Siewert, Andrea Schermoly, Alex Ketley, Gustavo Ramirez Sansano, Michael Pink, Matthew Neenan, Alberto Alonso, Jorge Garcia, among others. Ms. Powers has received awards, including the Jury Award at Shanghai IBC in China and a Silver Medal at the World Ballet Competition in Orlando. She was also nominated for Pointe magazine’s “The Standouts of 2018” for her interpretation of Edwaard Liang’s Giselle. Ms. Powers has also been involved in several film projects for BalletMet including “In Tandem” and “Becoming Violet,” for which she received an Emmy Award.

In 2000, choreographer Diane Coburn Bruning founded Chamber Dance Project, dancers & musicians in New York with her conviction that dance should be performed with live music, that smaller venues afforded a more intense experience, and that sharing the creative process engages audiences on a deeper level. In 2013 she moved the company to Washington, DC.

Diane has worked on productions with Pittsburgh Opera, Glimmerglass Festival, and four with Washington National Opera at Kennedy Center. Vogue Television did a feature on her and Dance Magazine named her as one of “25 to Watch.” Diane’s works appeared in the International Ballet Festival in Colombia, South American, and her major work, Boots, was premiered near Berlin with Ballett Magdeburg.

She has been a teaching artist for Lincoln Center Institute and New York City Ballet and has served on many grant panels. Diane directed the Craft of Choreography Conference and helped found Pacifica Choreography Project; she has led choreographic workshops throughout the country. While her choreographic career took hold, she also worked at the renowned Dance Collection of the New York Public Library and taught Dance History at Douglass College and Rutgers University.

Graduating with honors from Butler University’s Jordan College of Arts, she later received their Alumni Achievement Award. She holds a Masters in Choreography from NYU and studied composition privately with Bessie Schoenberg and music with Juli Nunlist. For a year Diane studied with renowned designers Jennifer Tipton and Ming Cho Lee on a post-graduate fellowship from Yale University School of Drama.