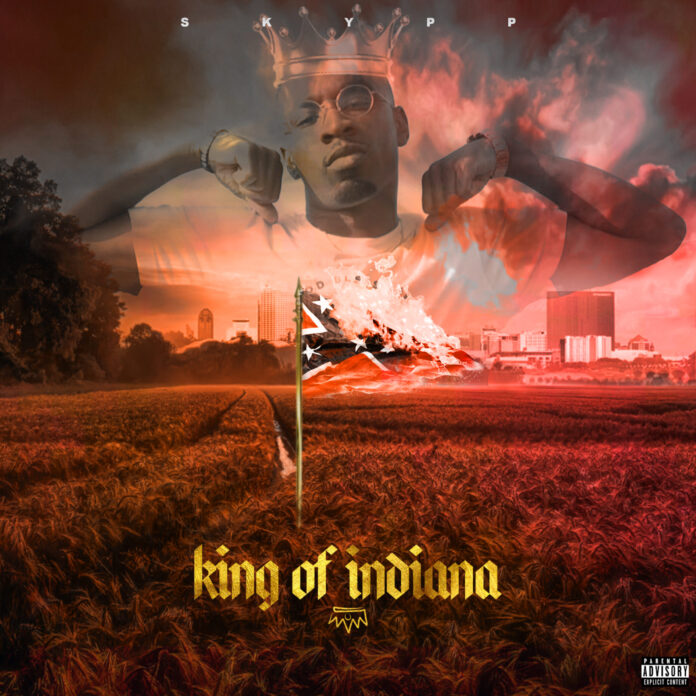 With sights on a revolution, Indianapolis rapper Skypp is back with his own brand of Sophisticated Street Music. Following a Top 15 charting release on iTunes in 2020 for his project, The Ghetto Mr. Rogerz, Skypp’s latest album drop, King of Indiana, is an empowering collection of storytelling, metaphors and melody, which hit all major platforms on March 19th.

Shining a light unto the underground with witty bars of wisdom and cautionary narratives, Skypp’s music is a blend of cerebral boom-bap, trap prophecies, and braggadocious flows over modern productions.

“King of Indiana is much deeper than what appears on the surface. Deep within the clever bars and comedic skits are real-life issues that need to be addressed and resolved,” Skypp says of the new album. “The team and myself put countless energy, creativity, and time into this album, and I couldn’t be more proud of the outcome. Remember, the only thing stopping you from being a king/queen is your OWN validation. Equality is king!”

Skypp first gained notoriety in 2011 with his weekly SoundCloud series “Skypp Saturdays” where he would flow over industry rap instrumentals. He has since appeared on shows with Babyface, DMX, Charlie Wilson, Mystikal, Too $hort, Floetry, Yo Gotti, Toni Braxton, DJ Quik, and Anthony Hamilton.

In 2018, the hip-hop community recognized Skypp when he received the “Most Promising New Artist” award at the West Coast Hip-Hop Awards. A key member of his hometown, Skypp was recently featured on the side of an IndyGo metro bus in promotion of the city’s new Red Line transportation service.

Skypp shows no signs of slowing down having charted in the iTunes Rap/Hip-Hop Top 40 charts and #7 on the iTunes New Rap/Hip-Hop charts with his 2020 album “U4U,” which won “Album of the Year” at the 2020 Midwest Leak Awards. You can keep up with Skypp by visiting https://www.officialskypp.com/. In addition, you can follow him on Instagram, Twitter, and Facebook.