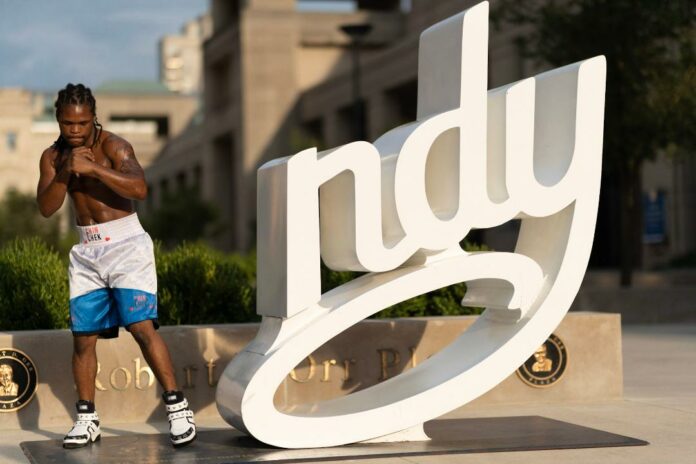 Upcoming boxing prospect Saleto Henderson is 6-0 with 5 KOs and has a big fight against NABF Junior Flyweight champion Jesus Soler Saturday, December 14, 2019. The title fight between Henderson and Soler will be the first time that a fight of this magnitude will be brought to the city of Indianapolis.

Henderson has always been an underdog that was dedicated to his craft and wanted to perfect his boxing technique, so he went out of the box and found people that believed in him and wanted him to excel in the sport. “I had to endure a lot of death and boxing calmed me down and gave me the discipline I needed. I used to fight in school and now I am fighting for a cause and my dream,” said Henderson.

Henderson knows that Soler is a crafty fighter that has a longer reach and can damage you with his jabs, so Henderson wants to dictate the fight by going mixing it up a little bit. He wants to go for body shots and then work his way up to getting quality power shots to the face that will open Soler up. “I want to take it up a notch and come out there and showcase to the world that I can be that contender that can put on a show.”

Henderson is dedicated and feels like this is his time to shine. He will have to be smart with not making any wrong mistakes with punching himself out of the round. At times Hendeson tries to throw more jabs than body shots in previous fights and it could hurt him against Soler. Henderson feels confident going against Soler and knows that it will be a tough fight between the two. It should be a great fight and a great crowd supporting the two fighters.

Coco Gauff’s Magical Run at Wimbledon Has Been Inspiring