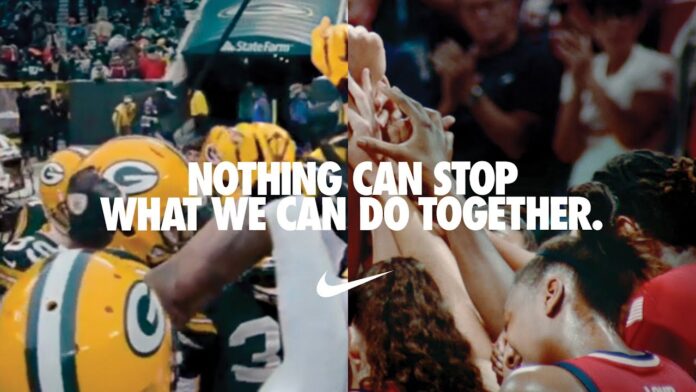 A new split-screen ad from Nike shines a light on a multitude of issues plaguing society. It uses athletes from an abundance of sports and walks of life to showcase the singular spirit of a great athlete overcoming adversity. The ad does all of that while still tying into the topic of the COVID-19 pandemic and social justice issues. The primary purpose of split-screen editing in this ad is to showcase the unity of sports by showing various athletes perform similar physical feats which sets a powerful tone for the ad.

The ad clips together many different Nike athletes that people typically would not associate with each other. Doing that portrays a sense of community among the athletes. It shows that they all go through the same triumphs, endure the same pain, and express the same amount of joy in their celebrations. It doesn’t matter what gender you are, the sport you play, or the culture you come from because the ad shows that all athletes are united and equal.

The ad also shows a significant amount of attention to social justice issues, specifically the Black Lives Matter movement. It shows various athletes protesting the national anthem which says a lot about Nike’s morals as a company because doing this can potentially offend some of their consumers. Like many other large corporations, Nike makes a significant amount of profit off black athletes and black culture so it would only make sense to stand with them through the issues they face in society. Many companies take the safest approach to support social justice issues because of the fear that they might alienate themselves from certain consumers but taking this approach often makes companies look even worse because it shows where their true intentions lie.

Large corporations should take a page out of Nike’s book. Most of them are aware of the social issues in society but choose not to address them because they prioritize money over actually doing what’s right. Nike differs from them because they’re making a genuine effort to bring exposure to a cause even though doing so may turn off a portion of their consumers. Unlike these other large corporations, Nike is making the right steps towards making a change.