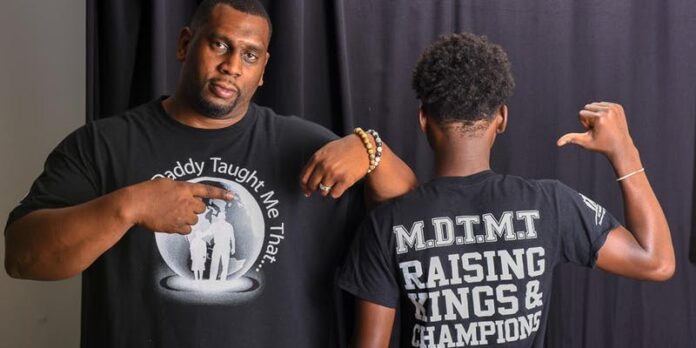 ( ENSPIRE Community Spotlight ) Asheville, NC Based Author Keynon Lake Founded My Daddy Taught Me That in An Effort to Provide Support And Mentorship To Youth in Western North Carolina

In the mountains of western North Carolina, a certain non-profit organization is causing ripple effects of change in the lives of disadvantaged youth. My Daddy Taught Me That (MDTMT) along with cohorts My Sistah Taught Me That (MSTMT) and My Daddy Taught Me That for Juniors, (MDTMTJ) was founded by Buncombe County Social Worker Keynon Lake.  The program, designed to uplift and support the development and education of underprivileged young men and youth in the Greater Asheville, North Carolina area, offers mentorship, resources, and educational support to promote accountability and encourage healthy decision-making for life. According to the organization’s website, “The mission of My Daddy Taught Me That is to assist in developing young males into righteous, respectable, and responsible men through empowerment, education, and support.”

The nonprofit originated from the book by the same name written by Lake and inspired by his late father, Bennie Lake, who had a profound impact on his life. Bennie Lake was a basketball player for the Harlem Globetrotters and played alongside Curly Neal and others. While Lake’s father was well known for basketball, he was also very involved in the community.  He dedicated most of his life working with the youth and retired from the Swannanoa Valley Development Center after thirty years of service as a social worker.

For Keynon, his father was his best friend and his mentor. While he admired his father’s legacy, social work was not originally for him.  Keynon, a basketball player himself, planned on pursuing a career with the NBA after graduating college with a degree in sports medicine. After trying out for a couple of NBA teams and not making the final cut, he came home and decided to start practicing social work. During his first two years, he began to notice a trend.

“It didn’t matter where I went–as a social worker, I was all over the area, in Black Mountain, Barnardsville. I started noticing a trend where there were no men in the homes,” he said. “I was like, what’s happening with our men?”

His observation is reflective of recent statistics.  According to the Pew Research Center, the United States has the highest rate of single-parent households, and women between the ages of 35 and 59 are more likely than men in the same age group to live as single parents. Today, 15.7 million children under the age of 18 are being raised without a father. This is especially the case for women of color. According to a recent study done by The Institute for Women’s Policy Research (IWPR), more than four in five black mothers are breadwinners of their households, with 60.9% of them raising families on their own.

The seed for the MDTMT program was planted not long afterward.  Following his father’s passing in February of 2010, Lake wrote an article for the local newspaper about what his father meant to him and his family, to the community, and the impact he had on people’s lives. A friend of his father’s who owned a publishing company at the time suggested that if Lake wrote another 5,000 words, he would have a book. ‘My Daddy Taught Me That’ was published in 2012 and focuses on a man’s role in the home while calling attention to the consequences that result from men not stepping up and taking responsibility for their lives and their families.

“I thought, why not start working with our youth? I love kids. I have a passion for kids,” Lake said.

In July 2012, the grassroots organization My Daddy Taught Me That was born. The program provides tutoring, discussion groups, mentorship, field trips, and career training for young men and partners with professors, counselors, and other community leaders.

“We want to put our kids in positions to succeed,” Lake said. “This means partnering with professors, school teachers, counselors, and making sure that our children are doing well academically.”

Four years later, Lake’s wife, Leslie Council Lake founded My Sistah Taught Me That in 2016, a joint program providing mentorship and support to young women with a special focus on those growing up in single-parent households without a father. This program focuses on enhancing self-esteem and confidence in young women, encourages positive body image, and offers career opportunities and educational resources.  As a native of Asheville, Leslie has witnessed and experienced the struggles and disappointments the youth in the area are facing on a daily basis. She also grew up in a single-parent household without a father which strengthens her passion and connection with young ladies facing the same challenges.  Leslie is committed to sharing her story with the hope of having a positive impact on the lives of young women.

Additionally, Keynon and Leslie started My Daddy Taught Me That For Juniors last year, a cohort program focusing on younger children. All three programs are housed under KL Training Solutions and are a 501c3 non-profit organization. They are supported through grant funding, personal donations, and any out-of-pocket expenses.

According to Lake, the entire organization is now the second-largest non-profit youth program in western North Carolina aside from the YMCA. “We have about 220 kids in all three of the programs right now,” Lake said. He envisions MDTMT and MSTMT continuing to have a positive impact on the lives of our youth and expanding beyond the borders of western North Carolina into new communities across the country.

Keynon and Leslie also hope MDTMT and MSTMT will not only educate the youth but inspire them to have the courage and stand up for themselves in their lives, knowing they have rights and they have a voice that needs to be heard.

“We’re giving our children voices to not only advocate for themselves, fight for themselves but the wherewithal to do better and know and recognize better,” Lake said.

Reel Sisters of the Diaspora Film Festival, #IGotYourBack: A Time for...