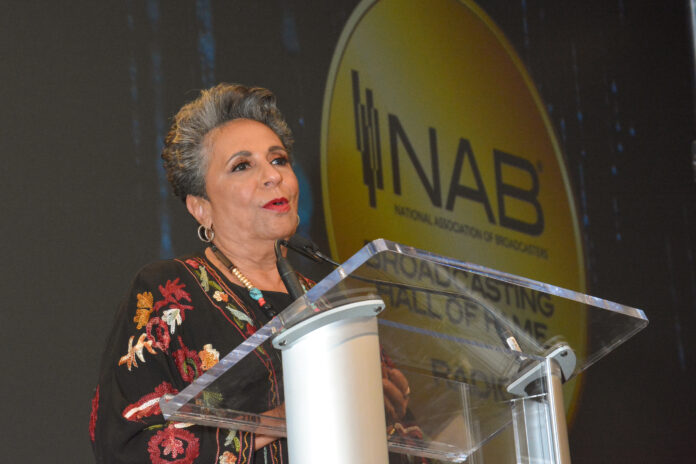 ( ENSPIRE She Did That ) Urban One Founder/Chairperson Cathy Hughes made history as the first African American woman to be inducted into the National Association of Broadcasters (NAB) Broadcasting Radio Hall of Fame /wp:heading wp:heading {“level”:4}

Urban One Founder and Chairperson Cathy Hughes made history as the first African American woman to be inducted into the National Association of Broadcasters (NAB) Broadcasting Radio Hall of Fame on April 8, in Las Vegas. To date, there have only been three women inducted into the NAB’s Broadcasting Radio Hall of Fame in its 42-year history.
Reflecting on the honor, Hughes said, “It is an honor to be recognized by the peers in my industry and I thank God for this incredible blessing as well as the National Association of Broadcasters.”

A self-made media pioneer, activist, and philanthropist, Hughes grew Urban One, the parent company of Radio One, Inc., into the largest African-American owned, diversified media corporation in the nation. Radio One, Inc. will celebrate 40 years in 2020. Urban One is an urban market leader with 59 broadcast stations across the country. Hughes also became the first woman to own a radio station that was ranked number one in a major market. Today, the company is run by her son Alfred Liggins, III.

The NAB Hall of Fame event was hosted by “Entertainment Tonight’s” Kevin Frazier, with an induction ceremony where media, entertainment, and technology professionals gathered to honor those who have made radio and television a vital part of the American lifestyle – earning them a place in broadcasting history. The event also recognized broadcasters’ commitment to innovating and creating new opportunities to deliver their highly-valued content to their audiences. Other honorees included the landmark football pre-game show “FOX NFL SUNDAY,” which was inducted into the NAB Broadcasting Hall of Fame; and Wendy McMahon, President, ABC Owned Television Stations Group, who received The Digital Leadership Award.