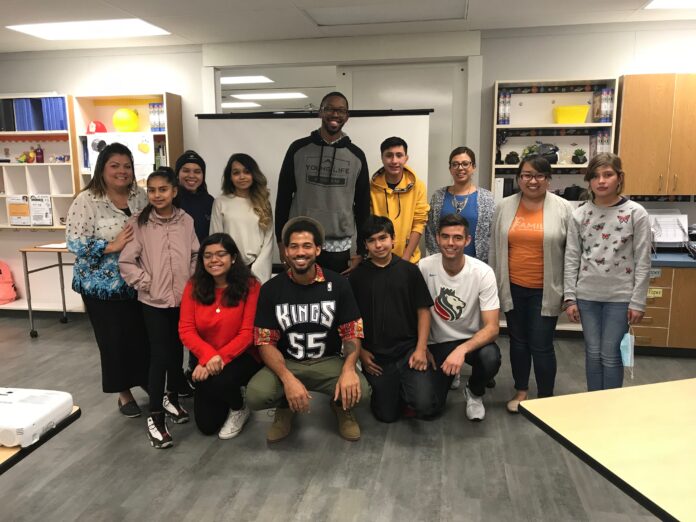 Department of Sound has officially kicked off its 2020 Music Producer Academy Series in Sacramento, CA. Since its foundation in 2019, Dept. of Sound has worked to empower Sacramento youth through music education and after school programming. Their focus is on providing entrepreneurial, leadership, and life skills to underserved youth, while simultaneously helping cultivate Sacramento’s status as an emerging creative global media and entertainment hub.

With in-person K-12 education temporarily suspended in Sacramento and throughout much of the nation due to COVID-19, Dept. Of Sound is quickly innovating and adapting to ensure its educational programs are accessible to more students. Launched as an onsite after school program, Dept. of Sound is now offering students and parents access to the entire Academy Series online in partnership with South Sacramento’s La Familia Counseling Center.

Through the use of live webinars, pre-recorded lessons, “virtual office hours” and more, Dept. Of Sound can stay connected to its upcoming student group while offering unique, innovative music production instruction to even more young people. Co-founder & executive director, John Hamilton, shares, “Our Music Producer Academy Series will give students an outlet;  something fun, creative & therapeutic to do in a time that is going to be very disruptive to their lives. We’re starting a 4-week program this week with 30 middle and high school students and will scale up and enroll hundreds of students in the coming months.”

The Music Producer Academy Series​ is a 4-week intensive program that teaches music production and podcasting fundamentals to middle school and high school students by utilizing the latest in music technology. Led by experienced instructors, students learn to use online cloud-based production software to create and collaborate on music and audio projects. By learning the fundamentals of music creation, students develop leadership and life skills, as well as how to harness and develop their creative confidence. Students are also exposed to possible career paths in the media and entertainment industries, as well as entrepreneurial skills that will prepare them to enter the creative economy.

The program will primarily run on Soundtrap, A Spotify Company, who will be partnering with Dept. of Sound on this series. At the end of the workshop series, Soundtrap will arrange for portions of students’ work to be uploaded to the Spotify platform, available for global streaming. Soundtrap will also support the ​Music Producer Academy Series​ by training their instructors and supporting the end-of-program showcase, which will take place online, where students will have the opportunity to present their work created during the program.

Since its launch, Dept. of Sound has forged creative and funding partnerships and has raised over $100,000 to support its programming. Key donors and partners include the Blavatnik Family Foundation, Soundtrap, a Spotify company, The County and City of Sacramento, Kaiser Permanente, Angelo K., and Sofia Tsakopoulos, the Dennis Mangers Fund for Young Performing Artists and more. Dept. of Sound recognizes the growing importance of arts programming not only as an indicator of community culture and vitality but also as a multifaceted benefit to youth and their future opportunity.

“We are so thankful for the support of the community and all of our partners and sponsors.  Together we can now begin the work of reshaping the creative and entrepreneurial future of our city.” – Tyler Garnett (Co-founder & Chairman of the Board)

From March 23rd – April 17th, 30 new students from Sacramento joined in on the Academy Series with live webinars taking place on Mondays and Wednesdays from 10:30 AM -11:30 AM, and virtual office hours taking place every day of the week. This inaugural class is making way for more students to join in the program come April for Session 2.

Session 2 will start on April 20th, this will be an offering for Sacramento Area students, funded by grants from the City and County of Sacramento, among others. On June 1st, we will be opening up to a larger cohort with a capacity of up to 200 students. We are adapting day by day, and by that time will have an on-demand program open to any student starting in the summer, with one-off masterclasses focused on music production, music composition, and the music business. We will have pre-recorded lessons as well as live sessions.

I am excited to be able to be a part of this opportunity to help the youth of our city establish their own voices while supporting positive forms of expression. We have brilliant youth that just need the opportunity and the access to a platform such as Soundtrap to begin to explore and create unique musical experiences that could take them to many different places in their lifetimes. It’s imperative that we teach youth and each other ways to deal with crises in positive ways. And this is a chance for us to do just that.  – Benwar Shepard (Lead Instructor)

In the future, the Dept. of Sound will expand efforts to include large-scale workshop programming, partnership events and offer easy-to-access resources that will catalyze the entertainment industry in the community through their network of music professionals between the Greater Sacramento Region and the New York City/Los Angeles area media and entertainment hubs.

About The Dept Of Sound

Department of Sound is a non-profit organization that was created with the mission to provide opportunities to youth through music in Sacramento while simultaneously helping cultivate the city into a global media and entertainment hub. Started by Sacramento natives John Hamilton and Tyler Garnett, Dept. Of Sound was launched in 2019 with the belief that everyone should have access to music education and its benefits. The program was founded on the idea of access to audio and music as a community utility, rather than a luxury.

Music drives the heart and soul of this organization, and its programs allow students to benefit both personally and professionally. Through its music workshops, Department of Sound strives to spark a passion for music and the arts among the community and empower youth with the ability to pursue music and entertainment as an extracurricular, hobby, creative outlet, collaborative activity and/or career. It is our duty to make sure these children have a chance to experience the multifaceted benefits of music and Department Of Sound is committed to that mission.