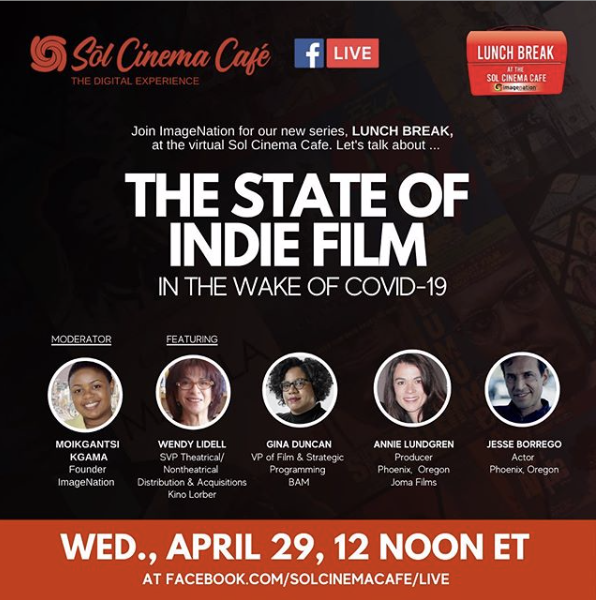 ImageNation is proud to announce new programs presented through its virtual cinema, www.SolCinemaCafe.com. On Wednesday, April 29, ImageNation launched “Lunch Break,” a talk series about cinema, culture, and community. This was followed by a two-week run of the indie film Phoenix, Oregon, which began May 1.

ImageNation Cinema is an innovative Harlem-based non-profit created to develop cinemas and audiences for independent films and music, that depict the global Black experience. ImageNation’s goal is to empower Black communities by presenting a variety of public programs that foster media equity, media literacy, solidarity, cross-cultural exchange and highlight the humanity of Pan-African people worldwide.

ImageNation founder Moikgantsi Kgama and her partner Gregory Gates were in the midst of renovations to open the Sōl Cinema Cafe, a click and mortar business in New York City’s Central Harlem community when the COVID-19 pandemic brought their plans to a halt. Designed to leverage both online and offline customers, the Sōl Cinema Cafe is a coffee shop by day and cinema by night, complemented by a website that offers online ticket sales, advance concessions orders, virtual talkbacks, and streaming. The duo planned to launch the brick and mortar first, while gradually cultivating the online platform. When COVID-19 hit the USA, ultimately triggering a statewide construction stop-work-order in New York City, they were forced to stop renovations on the cinema-eatery, and focus on the digital side of the business. To progress at a time of uncertainty, they are offering programs that were originally slated for the brick and mortar space, through virtual means.

“Initially, we felt derailed by the pandemic. But we soon realized that the pause in construction gave us the space to focus on implementing the digital aspect of our business and fundraising,” said Moikgantsi Kgama, founder of ImageNation and CEO of the Sōl Cinema Cafe. “We’re also taking this opportunity to expand the brand offerings a bit, by experimenting with more mainstream content.”

The film Phoenix, Oregon is the Sōl Cinema Cafe’s first virtual release. Starring James Le Gros (“Drugstore Cowboy,” “Living in Oblivion”), and Jesse Borrego (“Fame,” “Blood In Blood Out”) and directed by Gary Lundgren, Phoenix, Oregon, takes a comedic look at two middle-aged friends, who seize an unlikely opportunity to reinvent their lives, quitting their jobs to restore an old bowling alley and serve the “world’s greatest pizza.” The makers of Phoenix, Oregon were just beginning their theatrical release when COVID-19 forced theaters across America to close. To keep momentum, they quickly built a platform that allows them to partner with arthouse cinemas and show their film virtually. Their innovative approach landed them an article in Forbes magazine.

“When I read about the film, I was taken by the can-do spirit of the filmmakers,” said Gregory Gates, Executive Producer of ImageNation and COO of the Sōl Cinema Cafe. “And then, I watched the film and fell in love. Phoenix, Oregon is the kind of film people of all backgrounds will love,” he exclaimed. “It’s an inspiring story about dreams, perseverance…and pizza!”

The goal of these online programs is to give patrons a taste of what they’ll experience at the brick and mortar venue, raise funds, and build a customer base for the click and mortar business.

Funds are still being raised to complete renovations, pay rent arrears incurred to due COVID-19, and provide operating reserves for the Sōl Cinema Cafe. Supporters can invest as little as $100 and earn a revenue share of the business through Mainvest.com at mainvest.com/b/sol-cinema-cafe-new-york. Or, folks can participate in the seat-naming campaign at www.imagenation.us/name-a-seat.

Patrons can join future live streams on their Facebook page. Phoenix, Oregon can also be purchased online at www.SolCinemaCafe.com; a portion of the sales support the opening of the Harlem venue.

Stevie Mackey Brings Out The Stars With “Taco Tuesday”