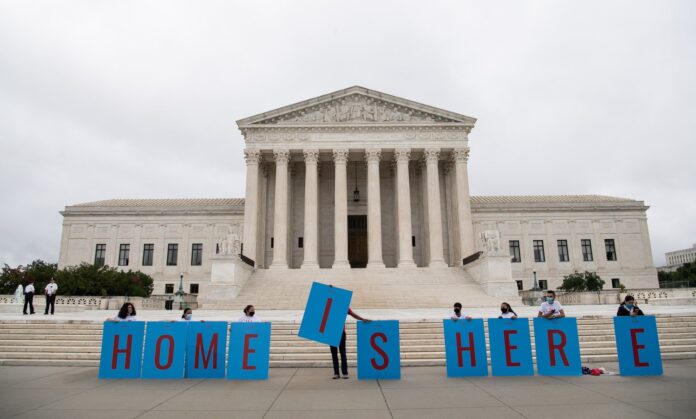 ( ENSPIRE News ) In a 5-4 decision, the Supreme Court Has Decided to Temporarily Bar the Trump Administration’s Orders to End the Deferred Action for Childhood Arrivals (DACA) Program

In a landmark 5-4 decision, the Supreme Court ruled to uphold DACA against President Trump’s wishes. The DACA program, the Deferred Action for Childhood Arrivals, was created under President Obama for certain qualified individuals brought to the U.S. as children were given temporary legal status. To qualify, these individuals had to graduate from high school or get an honorable discharge from the military with a background check. Just months after Trump took office, his administration attempted to revoke the program only to be blocked by numerous lower courts and now the Supreme Court.

In 2017, Former Attorney General Jeff Sessions declared DACA unconstitutional. He stated “Such an open-ended circumvention of immigration laws was an unconstitutional exercise of authority by the executive branch,” basically stating the whole creation of DACA, to begin with, was illegal and therefore void.

Chief Justice John Roberts disputed the above claims made by the former Attorney General stating that he made no concise, detailed justifications for the rescinding of the program. The Chief Justice was essentially arguing that the legal standing for the revocation of DACA cannot be done without more explanation and justifications. It cannot just happen because the administration wants it to. They have to go through a more lengthy, bureaucratic, and legal process if they wish to further with the revocation of DACA.

Ultimately, Roberts made it clear the administration has the power to rescind programs like DACA but not in this way. The decision has made it clear to both sides that this fight is long from being over.

The 5-4 decision is good news, but it’s not the end of the attack on the program from the Trump administration. They’ve already made it abundantly clear they will continue in their attempts to revoke the program through more “legal means”. The Supreme Court’s decision doesn’t protect DACA in its entirety or other programs like it. The fight to uphold DACA is not over yet.