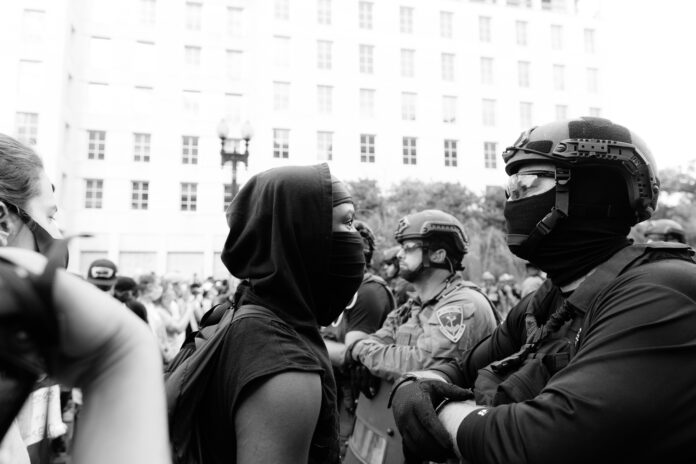 Everyone has their own unique perspective on the Black Lives Matter protests. Some people read about it online, some people watch it on the news, some post about it on social media, and some take to the streets and march on the frontlines. In times of such significance, it’s important to stay educated and curious about thoughts and perspectives different than your own. We at ENSPIRE had the pleasure of speaking with Oyoma Asinor, a protester in D.C. and a very gifted photographer, about his thoughts on the protests, the Black Lives Matter movement, and how people can help make a difference.

We began the interview by getting to know Oyoma Asinor. He told us that he graduated from Penn State recently with a bachelor’s in Security and Risk Analysis. Asinor moved to D.C. around 5 months ago to begin his new job in McLean, Virginia. Rather than moving to McLean, he decided that living in a bustling city such as D.C. would provide him with more opportunities to pursue his passion for the arts as a street photographer. It turned out that he would have ample opportunities, as only a few months after arriving in D.C. he would get to live through and document history. And with this, we began talking about the protests and this monumental movement.

Alright, so now let’s talk about what’s happening downtown and around the world. When you heard about George Floyd’s death, what was your initial reaction?

To be honest with you, I think that I have a very different reaction than most. There’s just been so much violence towards people of color that at a certain point, as a person of color or a black man, you just get really numb to it. You hear about Trayvon Martin being killed or about George Floyd being killed, and it never seems to end. It’s become our new normal. But to see the reaction that this particular death has gotten has been crazy.

So then when the protests started, what was your reaction to that?

Well, for me, I like to consider myself a protestor first and a photographer second. I’m there to be in the street fighting every single day. The first day was super impromptu; people were just showing up to the White House and Lafayette Park. It was a small march on the first day. And for reference, I live like 5 blocks from the white house, and it takes me 5 minutes to get down there so this is happening in my own backyard now. I saw things posted on Reddit and Twitter talking about how people were starting to gather outside of the White House and you know, I have to be there. This greatly impacts me and my heritage. For me to be so close to it and not be involved would be criminal for me.

Being at all the protests, when you see white people there supporting and protesting, how does that make you feel?

It’s complicated, right? Racism isn’t just a black problem. To see people who aren’t of color standing here with black people is a great thing. We need those voices on the front line. Especially in the first couple of days, I saw so many white people jump in front of people of color on the front line, and they weren’t being asked to do so. It’s just something that they felt like they needed to do.

Having said that though, there is a flipside. I’m sure I’m gonna rub a lot of people the wrong way when I say this, but in the past couple of days, I am seeing these protests shift demographically and move towards the whiter end of the spectrum. I’ve been seeing a lot of people appropriate or gentrify the whole thing in a way. I’ve noticed a lot of white people bringing signs down to Lafayette and the recently renamed “Black Lives Matter Plaza” and taking pictures with something that says Black Lives Matter then leaving and going home. And it wasn’t like that at first, don’t get me wrong. For the first week, it was very much like a fight with organized protesting and marching. Now that that has calmed down, I personally have seen a lot of people, particularly not of color, use black lives to elevate themselves. In my opinion, there’s no reason to take a selfie at a Black Lives Matter protest. Like what does that really accomplish for us? It’s just my opinion coming from a person of color and seeing it happen from the other side.

A lot of people are turning to social media to share resources and to educate themselves. Like especially black out Tuesday, for example. What’s your point of view on all of this?

We live in a day and age where everyone has a platform on social media, but speaking to black out Tuesday in particular, it was incredibly frustrating. Instead of posting just a blank square on your profile, you could take that post and share resources. The Instagram algorithm took that hashtag and lumped it in with the Black Lives Matter hashtag. So, what ended up happening was if you scrolled through the Black Lives Matter hashtag, which we use to get developments from people who are on the ground all over the country, it was just blanked out almost like as a form of censorship. It’s a double-edged sword; I get people were trying to do a good thing, but at the same time they might be disrupting the flow of information. I think that we are in a time where we can create real change. There’s always information to share. I think it’s better to share than to say nothing.

So, now I want to go back to talking about the protests. You mentioned that you are there every day. What are the emotions and thoughts going through your head while you’re at the protests?

You see a lot. Especially that first week. I had a flashbang go off like three inches from my face, and I actually got it on camera. A lot of my friends were checking up on me to make sure I’m straight, and it was really hard to carry conversations. Every single day just feels the same at a certain point. One of the days, we were being pushed by police officers from the white house down 8th street. We were peacefully walking away, and we passed these officers that were guarding a store so people started asking them to kneel out of respect. One officer took a knee for half a second so everyone was happy. We started walking away, and immediately when we turned our backs a flashbang got tossed at us. So, then things were totally different, I don’t think people understand that the way police were operating in D.C. was very militant. They weren’t just controlling a large group of people, they were splitting us up very strategically. And it just keeps us thinking like how can tomorrow be different. But I just keep thinking every single time I go out it might be one of those days where things can just change.

In regards to the police, what kind of changes do you hope will be made, and what would be a good solution?

Think about how long we’ve been defunding mental health programs, physical health programs, teachers’ salaries; we need to start defunding the police. I think that seems like a very powerful and very frontline thing going around right now, and after seeing what I have seen I totally agree. Money can be going towards funding for PPE and masks. We are still in the middle of a pandemic, and to see these officers in the streets with riot shields and shooting projectiles and tear gas, all of that money can be spent somewhere else. The most peaceful things have been in D.C. is when there have been no police officers present. Like when people say we can police ourselves, I legitimately believe that. The minute that police show up with riot gear, that’s when everyone’s like “okay, things are gonna escalate now.”

The whole system from the ground up is just rotten. When we say there’s good apples and bad apples, I think that’s inaccurate. The tree itself is rotten. The thing that grows the apples itself is bad. So, therefore, all the apples are bad.

On a personal level, can you tell me what you hope these protests and the movement, in general, will accomplish in the future? And could you speak to what you want to say you contributed?

Everyone is contributing something different. For me, I’m pretty okay at taking pictures. I’m showing people what it’s like being on the street every day. When you see coverage on the news, they only have time to show the big things. Being a person on the ground and being a protester first, you see so many small stories and interactions unfold, and I want to show you that. Just having my camera there and being able to show people what is really happening on the ground from someone’s eyes rather than seeing it on the news is what I hope to contribute.

I’ve had people reach out from Brazil and Europe and be like “hey man, we’re doing the same thing over here. We get it, we’re fighting with you guys.” The world is watching, and they might be watching from my eyes and my work. It’s important, but it’s not really about me. I don’t wanna be famous. I don’t wanna get likes on Instagram. It’s really just that this is what I have been doing for 7 or 8 years anyway, and now these two things that I’m really passionate about are colliding. It’s how I can give back.

Speaking with Oyoma gave us a fresh perspective and a deeper understanding of what it’s like being on the front lines of this movement. He has been updating his Instagram daily with footage, unique stories, and powerful images from the protests. He will continue to take to the streets in support of black lives while simultaneously capturing history in the making.

Check out Oyoma’s Instagram at @_oyoma for more photos and updates from the Washington, D.C. protests.

Michael B. Jordan is Bringing Free, Diverse Drive-in Movies to Savannah GA, and Other US Cities

These Six Men Stood Up To End Female Genital Mutilation!