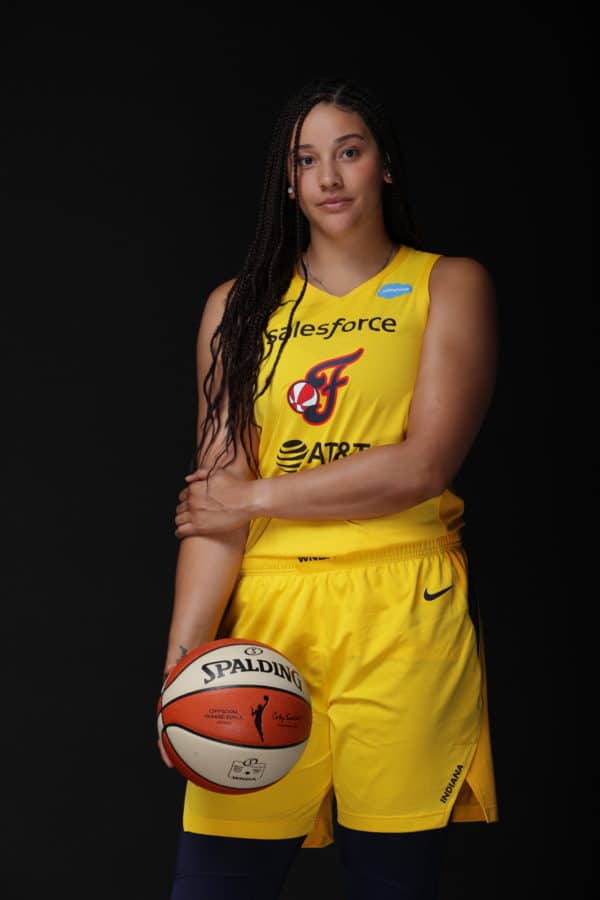 On July 24th, in New York, the WNBA announced that Indiana Fever center Natalie Achonwa had earned the Dawn Staley Community Leadership Award for outstanding leadership and commitment to the community.

The award, which is named in honor of WNBA legend and Hall of Famer Dawn Staley, was created to recognize a WNBA player who best exemplifies the characteristics of a leader in the community where she works or lives and focuses exclusively on a player’s activities during the offseason.  The award and its winner reflect Staley’s spirit, leadership, charitable efforts, love for the game, and inspirational presence in the community.

Achonwa previously earned the 2019 Seasonlong WNBA Community Assist Award presented by State Farm in recognition of her commitment and dedication to giving back to the community and helping organizations that focus on mental health, anti-bullying and suicide prevention in addition to helping with education and literacy among youth, adopt-a-pet and empowering women.

“The league is incredibly proud of Natalie as she continues to show her passion and determination for making the world a better place,” said WNBA Commissioner Cathy Engelbert.  “As leaders of the community, Natalie and fellow WNBA athletes are socially conscious individuals who continue to show dedication to making a positive impact, and we’re fortunate to have such powerful advocates for change in the league.”

Achonwa has also been a huge pillar and voice for the Indiana Fever to work against racial injustices, oppression along with the stigma surrounding mental health.

Throughout the offseason, Achonwa developed a way to stay emotionally connected to fans and the community with “Nat Chat,” where she interviewed other personalities in sports and discussed important initiatives such as mental health and racial injustices.  In June, Achonwa joined Tamika Catchings, George Hill, and others in the Monumental March and the Voter Registration peaceful protest in Indianapolis.  Achonwa continues to do her part to #MakeThatChange and to be a leader in the community, knowing that her platform with the WNBA helps encourage others to join in the movement.

“It is important for me to optimize the benefits and privileges I receive from being a professional athlete.  A big piece of that is using the platform I’m awarded to connect with people, promote a level playing field, and inspire others to make positive change,” said Achonwa.  “Through the ups and downs of my own personal journey, I have found that it is the little things that make the biggest difference.  If we all focus on challenging the status quo of our own circles, and build from there, we can tackle the world and keep moving forward.”

“In my own life I’ve been fortunate to be recognized for a few things within the game of basketball, but what I know now, and what has never been more true than it is at this moment in time, is what we do on the court matters far less than what we do off it,” said Staley, Head Coach of the University of South Carolina Women’s Basketball Team.  “That understanding is why the Dawn Staley Community Leadership Award is so important to me and I couldn’t be prouder of Natalie as the award’s recipient.  If there is an issue that will make our communities better – mental health, gun violence, hunger, literacy, domestic violence, racial justice, and I could go on  – Natalie is deeply involved in it, and so while basketball may be why we know Natalie today, her commitment to being a force for positive change is what we will remember her for.”

The Dawn Staley Community Leadership Award winner is selected by a designated committee of nominated WNBA players. A major part of this award is that the WNBA will now make a $10,000 donation on behalf of Natalie Achonwa to the Madam Walker Legacy Center.

"Catch My Lash" is Catching On!