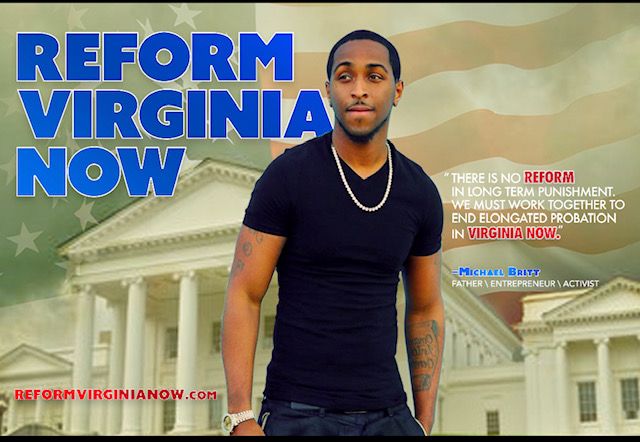 ( ENSPIRE Man Code 101 ) With Outdated and Unfair Rules, the Probation and Parole System of Virginia Does More Harm Than Good

Imagine being sent to prison for missing a meeting, consuming alcohol, or socializing with friends you were forbidden from seeing. What sounds like an extremely harsh set of rules in a bizarre country is actually the lived reality for anyone on probation or parole in the United States. Due to the stringent rules and regulations of the parole and probation system, many offenders find themselves sent to prison for committing minor infractions that are not technically crimes but are considered parole violations. Changing these archaic laws is the mission of 26-year-old Michael Britt, a victim of the repressive probation system. Together with social justice advocate Michael Muhammad, he created Reform Virginia Now, a movement seeking to reform the criminal justice system of Virginia.

“There’s a saying that goes, ‘Come to Virginia on vacation, leave on probation, come back on a violation,’” says Britt. “Virginia’s probation is set up is like a revolving door. The tactics are not effective to help the person on probation reform properly in society.  The rules are set up for you to break.” According to the Justice Policy Institute, Virginia has the 8th highest incarceration rate in the U.S., holding 1 out of every adult in the state. Incarcerating people for technical violations that have no bearing on public safety continues a system of criminalization rather than reform, and is one of the most significant causes of recidivism.

Britt is one of the many residents of Virginia whose life is monitored and controlled by the parole and probation system. He was sentenced to two probations in two Hampton Roads cities after taking responsibility for marijuana-related charges. At the three-and-a-half-year mark of his probation, information from an anonymous call to his probation officer made him subject to electronic monitoring. On parole, Britt focused on avoiding trouble and building his public profile in the entertainment and real estate industry. But under the strict rules and regulations of the probation system, he was unable to accept offers to work with industry giants like P. Diddy, Pusha T, Busta Rhymes, as well as Greg Parker of the National Real Estate Development Influence.

He has been woken up to his Parole Officer demanding to search him and his home in front of his young child, and his ability to travel was restricted. Every aspect of his life is tracked and micromanaged and he is seen more like a case file than a human being. “It has restricted me from doing so many things and forced me to give up so many once-in-a-lifetime opportunities that would have changed my life,” he says.

According to Britt, a significant issue is that the rules and regulations are up to the discretion of the parole officer, so your ability to do anything is subject to whether they like you or not. “It’s based on how they feel about you which is already negative because of what they see on paper,” he says. He also laments the injustice of the overworked and racially-biased court system. “The ruling of each case is really determined on the council that you hire and how much money you have,” he says. “Throughout time people are forced to take plea bargains for cases in which there was never substantial evidence to convict them for because behind the scenes they are literally auctioning off people’s cases.”

Reform Virginia Now is aimed at raising awareness and engaging citizens, elected officials, inmates, and persons on probation and parole in discussions aimed at reforming the entire system. It also focuses on the process by which judges are appointed in Virginia. “Our work here in Virginia has lead to major systemic change in the criminal justice system but we have much more work to do,” says Britt. He hopes to end the cycle of punishment that has wasted so much human potential and bolster programs and initiatives that foster rehabilitation and reintegration into society.