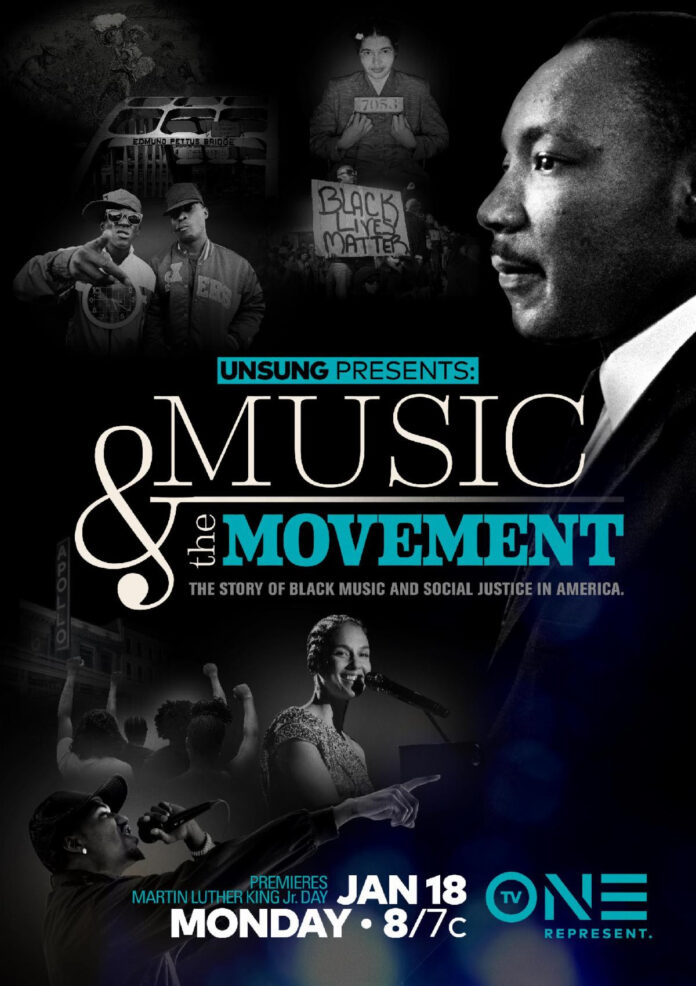 “Music is the heart and soul of Black culture, giving life to our experiences, voice to our stories, and growing power out of our pain,” said Cathy Hughes, Chairwoman of Urban One, Inc. “Every melody, lyric, and rhythm artfully depicts the layers of Black diversity, the scope of Black creativity, and depths of the complexity of our people. TV One’s Music & the Movement special pays homage to the music and music makers whose talents created a soundtrack of Black music during moments of political and social unrest throughout our history. It is another opportunity for us to spotlight Black content.”

“Throughout history, Black music has been a clarion call to amplify the voice of our community and important social and political movements like the Civil Rights and Black Lives Matters Movements,” remarked Robyn Greene Arrington, Vice President of Programming and Production. “After an unprecedented year of social, economic, and political turmoil, we felt MLK Day was a great time to chronicle the ongoing struggles of Black Americans along with those who tirelessly lend their voices to protesting injustice and instigating positive changes for our community and social justice movements.”

The Martin Luther King Jr. Day special incorporates first-hand accounts, interviews with artists and media coupled with archival footage from memorable speeches, soul-stirring vocal performances, and more. Moments of Black auditory dissent featured in the special spans centuries and includes themes of Black spirituals, like “Swing Low Sweet Chariot,” which provided both a distraction from the harsh conditions of slavery and communication tools for the enslaved as they plotted their escape to freedom; to soul and funk anthems during the Black Power movement performed by Aretha Franklin (“Respect”) and Curtis Mayfield (“People Get Ready”) demanding an immediate change to the political landscape and that civil rights be upheld; to the heart-wrenching viral music videos by young, contemporary artists—like Keedron Bryant’s captivating single “I Just Want to Live”—creating rallying mixtapes for the current Black Lives Matter movement which, this past summer, saw a melting pot of cultures across the globe, which marched in solidarity, to protest police brutality. The two one-hour specials serve as a re-examination of the power that music has had to transform a cultural moment into a movement.

Additionally, Unsung Presents: Music & The Movement will feature the broadcast debut of the original track “KliKKK KlaKKK” by Sunny Dizzle and the group Steaksawse, recently announced as the winner of Reach Media’s “The Song” contest. Presented in partnership with Kevin Liles and 300 Entertainment, the contest was designed to provide an opportunity for an independent artist to create music that reflects the current climate, elevates the collective consciousness, and promotes hope and change. The single will have its global release on Friday, January 15, 2021, and will be featured across Reach Media radio stations.

For more information about TV One’s upcoming programming, including original movies, visit the network’s companion website at www.tvone.tv. TV One viewers can also join the conversation by connecting via social media on Twitter, Instagram, and Facebook using the hashtags #MUSICANDTHEMOVEMENT and #REPRESENT.