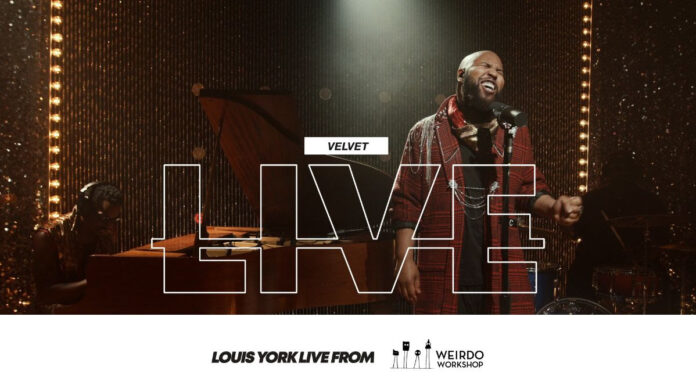 As the world is still sheltered inside, hitmaking duo Louis York (Chuck Harmony & Claude Kelly) knows how to make the audience feel like they are at a live show. The band released live visuals for their smooth single “Velvet” off their album American Griots. Directed by Jeremy Ryan, the band sets the mood as Kelly commands the stage with his raspy vocals taking the viewer to a dimly lit club embarrassed in their lover’s arms.

According to Weirdo Workshop’s website, American Griots is an ambitious step forward for Louis York, stretching the limitations of convention by traipsing sound and style, without losing focus of the message at hand. “For us, it’s not just about writing a song—our songs come from life experiences and learning and mistakes,” Kelly said. “The songs aren’t just like, look at us, we can do cool music. Louis York is more about the music, which is the end result of a lot of growth. It always feels better when we pull our music out, because it feels like it’s the ending of a really long, hard race.”

Louis York’s American Griots is available on all DSPs as well as on vinyl on weirdoworkshop.com. Originally released in 2019, the project is a double (2) LP and is a well-crafted theatrical experience starting from the needle dropping on side A until the end on Side D. As a bonus, the vinyl features the band’s ever-popular jazz standard “I Enjoy You.”

As the country works to get back on its feet, Louis York will join the legendary John Oates (Hall & Oates) for the Oates Song Fest 7908 on March 20. During this free webcast to raise money for Feeding America, the festival will feature a wide range of singer-songwriters, including Darryl Hall, Bob Weir, Dave Grohl, Jim James, Sammy Hagar, Keb Mo, Shawn Colvin, Michael Franti, Saxsquatch, and more.