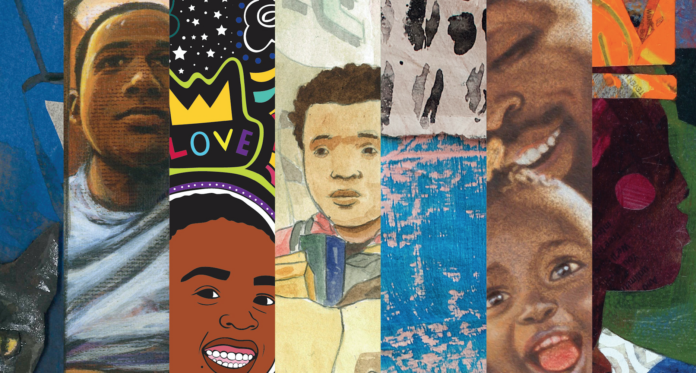 Penny Candy Books introduces an array of children’s books to celebrate Black authors and stories. It’s the perfect time to read and recommend “13 Ways of Looking at a Black Boy” by acclaimed poet and scholar Tony Medina and thirteen artists of color and “A Gift From Greensboro” by poet, professor, and civil rights historian, Quraysh Ali Lansana and illustrated by Skip Hill.

“Small press. Big conversations” is the tagline of Penny Candy Books. The independent children’s book publishing company based in Oklahoma City, Okla., and Greensboro, N.C. Founded in 2015 by poets Alexis Orgera and Chad Reynolds, they aim to create conversations and to publish children’s literature that reflects the diverse realities of the world we live in, both at home and abroad. They hope to seek out books by and about people and subjects that speak to and from a broad range of human experience.

“13 Ways of Looking at a Black Boy” is a poetry collection written by Tony Medina and thirteen artists of color—six of which are women. In tanka verse (a thirty-one-syllable poem), poet Medina shines a light on the beauty of black boys. Medina also invites illustrators, Kesha Bruce, Floyd Cooper, Javaka Steptoe, Ekua Holmes, to bring the collection to life. The collection received a glowing response from Kirkus Reviews: the poems “celebrate the preciousness and creativity” of black boyhood and flow through topics such as family, spirituality, self-confidence, and the stressors of working-class life. While emphasizing their universal appeal, Medina cites that these collected poems were originally inspired by photographs of the residents of Anacostia, a historically black neighborhood threatened by gentrification in the southeast section of Washington, D.C. The title has its genealogy, emerging from Wallace Steven’s 1952 poem “Thirteen Ways of Looking at a Blackbird” and Raymond Patterson’s 1969 “Twenty-Six Ways of Looking at a Black Man,” a classic of the 1960s-era Black Arts Movement.

Born in the South Bronx, Medina earned a BA from Baruch College and an MA and aTPhD in African American and American literature and creative writing from the State University of New York, Binghamton. He is the author and editor of more than a dozen books for adults and young readers. In his work, Medina explores the transformative intersections of racial and class struggle. Writer Ishmael Reed notes Medina as “Poet Laureate of the Broke,” and “tells us how the broke get by, how they live, their day to day quest for survival.” Medina has also been featured in the Encyclopedia of Hip Hop Literature and was cited in the Encyclopedia of Rap and Hip Hop Culture. Besides “13 Ways of Looking at a Black Boy,” his latest works include the graphic novel “I Am Alfonso Jones” and “I and Bob Marley.” Medina currently teaches at Howard University, where he was named the first professor of creative writing.

“A Gift from Greensboro,” written by Quraysh Ali Lansana and illustrated by Skip Hill, a celebration of the magic of childhood friendship, and a meditation on growing up in the wake of the sit-ins that ushered in the Civil Rights Movement. Paired with intricate, layered illustrations, the free-verse poem recognizes that true friendship knows no boundaries and that love drives positive change. The poem refers to the Greensboro sit-ins in 1960 and is an adaptation of an autobiographical narrative poem originally titled “The Woolworth’s Poem,” which appeared in Lasana’s first full-length book of poetry, “Southside Rain.” Spanning Oklahoma City and Greensboro and three-time periods, the poem emphasizes that civil rights battles happened not just in the south, but across the nation.

Born in the town of Enid, Okla., Lansana received his MFA in creative writing at New York University. He is currently a faculty member of the creative writing program of the School of the Art Institute of Chicago and has been a literary teaching artist and curriculum developer for over a decade. Lansana led workshops in prisons, public schools, and universities in over 30 states and his work examine the politics and inequalities—in race, ethnicity, and social status. He is a former faculty member of the Drama Division of The Juilliard School and served as director of the Gwendolyn Brooks Center for Black Literature and Creative Writing at Chicago State University from 2002-2011, where he was also Associate Professor of English/creative writing.

Find out more about “13 Ways of Looking at a Black Boy” and “A Gift From Greensboro” at pennycandybooks.com.

The Cleveland’s Defines a New Idea for Leaders Everywhere