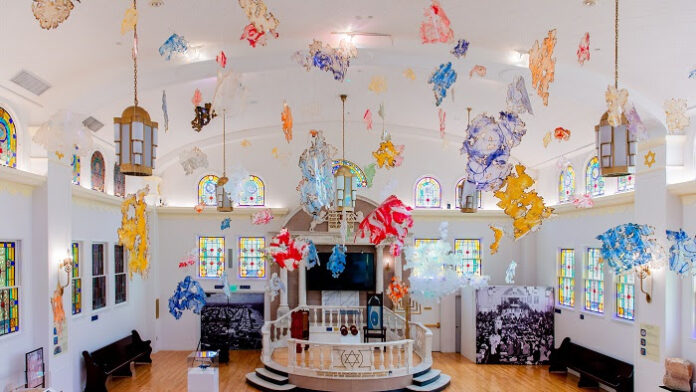 For those who may not be familiar, the Robert B. Feldman Collection is one of the most important collections of contemporary art in Florida and includes beautiful paintings, sculptures, and installations by distinguished artists such as Mickalene Thomas, Lamar Peterson, Yoan Capote, and Vibha Galhotra, to name a few. However, Dr. Robert B. Feldman, the New York-based art collector, has promised a gift to the Jewish Museum of Florida-FIU of a major installation by the artist Mira Lehr.

The artwork, titled Sacred Dreams, comprises 183 aerial sculptures that descend from the ceiling of the museum and are estimated at a value of $300,000. The installation is currently on view at the museum as a temporary loan from Dr. Feldman and will become part of the museum’s permanent collection in September. The museum is centrally located in South Beach, in the heart of Miami Art Week and Art Basel Miami Beach. Dr. Feldman previously lived in Florida and was known for having “one of the most important collections of contemporary art in Florida.”

The 183 aerial sculptures are made of burned and dyed Japanese paper, acrylic, ink, and resin. “I am honored to donate this major work by Mira Lehr to the Jewish Museum of Florida-FIU,” said Dr. Robert B. Feldman. “This large-scale work now has a permanent home in the community for all to enjoy, including the millions of tourists that visit Miami Beach at this beloved gem of a museum that is of historic importance in the Southeast.”

The museum is on the National Register of Historic Places and is the only museum dedicated to telling the story of over 250 years of Florida Jewish history, art, and culture with a growing collection of more than 100,000 items. “We are very grateful to Dr. Robert B. Feldman for this donation to the museum,” said Susan Gladstone Pasternak, the Executive Director of the Jewish Museum of Florida-FIU. “Mira Lehr created this stunning installation, Sacred Dreams, specifically with the museum in mind as a result of a personal visit here. After Lehr spent time at the museum, she reflected upon the emotions and inspiration she felt and created these 183 aerial sculptures to interact with the light they create together with our stained-glass windows. The result is truly magnificent.”

“I want viewers to feel like they are walking beneath an aerial garden of luminous, reflecting sculptures,” said Lehr. “A holy garden of light that takes people out of the actual world and transports them onto a spiritual plane,” adds Lehr.

In 1960, Lehr co-founded in Miami Beach one of the country’s first co-ops for women artists. It was called Continuum and thrived for over 30 years, blazing a pioneer trail that helped establish Miami’s evolution as an art destination. She is known in the art world as “the Godmother of Miami’s art scene” and has mentored many artists through the years.

“The Mistress of Light”

Sacred Dreams by Mira Lehr showcases the artist’s six decades of art-making on Miami Beach. Nationally renowned as an eco-feminist artist, Lehr is celebrated for working with imagery from the natural world, creating layered, abstract compositions with unconventional materials. The lush flora of her Miami Beach home (where Lehr grew up in the 1940s) has a profound influence on her aesthetic vocabulary. The 60 Minutes television correspondent Morley Safer referred to her as “the mistress of light.”

The Museum is housed in two restored historic buildings that were once synagogues for Miami Beach’s first Jewish congregation. They built the original synagogue in 1929, and Art Deco architect Henry Hohauser and features 80 stained-glass windows, a copper dome, and a marble bimah designed the second, built-in 1936. While reflective of the Jewish experience in Florida, the museum creates an understanding of the shared immigrant experience in our multicultural society.

Mira Lehr’s solo and group exhibitions number over 300. She is a graduate of Vassar College (1956) with a degree in art history under the mentorship of Linda Nochlin, the renowned feminist art historian. She has been collected by major institutions across the U.S., including the Smithsonian Museum of American Art (Washington), the Getty Museum Research Center (Los Angeles), the Boca Raton Museum of Art, the Perez Art Museum (Miami), the Frances Lehman Loeb Art Center (NY), the Margulies Collection, the Mennello Museum of American Art, the Museum of Contemporary Art in North Miami, the Jewish Museum of Florida-FIU, and the Orlando Museum of Art, among others.

Her work is in the private collections of Elie and Marion Wiesel, Jane and Morley Safer, and the artist Judy Pfaff, among others. Lehr is included in the prestigious Leonard Lauder Corporate Collection in New York. They commissioned thirty of her paintings for the permanent collection of Mount Sinai Hospital. We can see her work in American Embassies around the world and is permanently on view in the lobby of the Evelyn Lauder Breast Center of the Sloan Kettering Memorial Center.

Lehr’s 2020 solo museum show at the Mennello Museum of American Art was selected by The New York Times as one of their selections among the leading museum exhibitions in the U.S. in 2020. Lehr’s solo exhibition headlined Art Basel Miami Beach 2019 at the Jewish Museum of Florida-FIU and also received national and international critical acclaim. Her museum-wide exhibition at the MOCA Museum in North Miami spanned across 10,000 square feet of installations. She has currently been chosen by Flying Horse Editions as an invited artist for a major project this year. Lehr has been invited to present a solo exhibition at The Deering Estate in the fall of 2021.

Mira Lehr’s nature-based work encompasses painting, sculpture, and video. She uses nontraditional media such as gunpowder, fire, fuses, Japanese paper, dyes, and welded steel. Lehr is known for igniting and exploding fuses to create lines of fire across her paintings. Critics are calling Lehr “the Godmother of Miami’s art scene” because in 1960 she created one of the nation’s first co-ops for women artists in 1960. At 86 and with a career that spans over six decades of art-making, Lehr is creating more new work now than at any other point in her life—with a heightened sense of urgency about the planet and climate change.

In the 1950s, Lehr studied and worked in New York as an artist where she met some of America’s most prominent masters, including Joan Mitchell, Lee Krasner, and Helen Frankenthaler. She studied with James Brooks, Ludwig Sander, Robert Motherwell, and within the Hans Hofmann circle. When Lehr moved back to Florida in 1960, she was shocked at the lack of an art scene, especially for women. She convinced many of the masters from New York to visit and lead workshops for her league of women artists. This helped the evolution of art in Florida.

Buckminster Fuller selected her in 1969, as one of only two artists, to take part in his World Game Project about sustainability and his groundbreaking “Spaceship Earth” concept, which preceded the world’s very first Earth Day in 1970. Lehr’s video installation, V1 V3, was on view at the New Museum, NY. Her work has been included in many art fairs during Art Basel Miami Beach. She was the recipient of the Vizcaya Museum Lost Spaces Commission where she was commissioned to create a site-specific installation by the Vizcaya Museum & Gardens as part of Vizcaya Museum’s centennial celebration.

To see more of Mira Lehr’s works, you can visit her official website here.