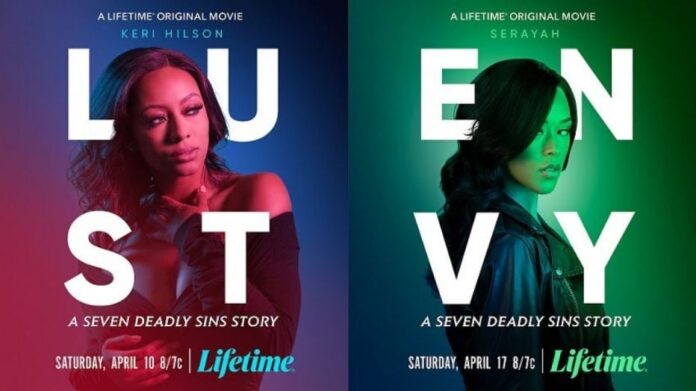 The premiere of Bishop T.D. Jakes movies—”Lust: A Deadly Sins Saga” and “Envy: A Deadly Sins Saga”—came on Lifetime on April 10th and 16th. Keri Hilson, Durrell “Tank” Babbs, and Tobias Truvillion, actors and actresses from “Lust,” and Serayah, Kandi Burruss, and Clifton Powell from “Envy” appeared at the virtual press conference, along with executive producers T.D. Jakes, Derrick Williams, and Shaun Robinson. They discussed the making of the films and incorporating two out of the seven sins through their characters.

During the “Lust” press conference, Keri, Tank, and Tobias speak on the love triangle that ends deadly. Their performance within the scenes was intense and gave a sense of how lustful acts can affect everyone involved.

Shauna shared her excitement about being an executive producer for the film after being a news producer for years. Her work within the journalism field helped her become a storyteller who can produce stories about people. For her, the film was a moment to open up the creativity in telling a person’s journey. “A lot of aspiring journalists come to me and they say, you know, they ask for advice. I always say, ‘Be multifaceted.’ You have to be able to exercise your talents in a lot of different areas. So for me, this is just another extension of my career as opposed to like a true pivot. But, yeah, it’s been really fun and especially it’s fun when you say you love the movie, too,” she stated in the interview.

Keri describes wanting to provide the audience with the authentic side of her character, Tiffanie. Keri’s ability to reach the emotional side of Tiffanie made her relatable. “There are some similarities with any current character that you do play, whether or not you actually carry these temptations out, maybe different,” Keri said.

Shauna expresses how fond she was of Tiffanie and how she was portrayed in the “A Seven Deadly Sins” book series by Victoria Christopher Murray. “When I first read ‘Lust’ several years ago, I was just drawn to Tiffany because she, you know, was someone who was trying to live the life that she thought she was supposed to live,” she added. “But she had these vulnerabilities about her that made her relatable, but also very empathetic.”

Tank and Tobias gave insight into the dynamic and tension between their characters, Trey and Damon, while in a love triangle with Tiffanie. Keri and Tank showcased how being in music helps acting. “I think, for us jumping on stage in front of 20,000 people in being able to deliver, deliver that thing, show that story, share that art, and being able to cross that same confidence over into the acting space,” Tank said.

Tobias discussed how different soap operas and films were from each other. From the length of time to film to writing the scripts, and flexibility. He added, “When it boils down to it, we’re acting, and we’re being professional, and we’re telling a story.”

During the “Envy” press conference, Serayah, Kandi Burruss, and Clifton Powell discussed acting in the film where jealousy takes another level is envious acts when a long-lost sister tries to come back into the family.

To draw the internal jealousy from her character Keisha, Serayah had to embark into a deep state of “not having anything” when she was growing up which helped transition that feeling on screen. “I was in a state of just relating to this character in a way to where I went back to when, you know, I didn’t have a place to live or I was going through something, a struggle in my life,” she said.

Kandi wanted to act ever since she was in performance art school for acting and theatre. She brushed up on her acting skills by taking more classes and was able to adapt in “Envy” as the concerned friend who noticed that there was something wrong with Keisha. “It is relatable to where you may have a close family member or somebody that you didn’t necessarily have that relationship growing up, to now that they’re trying to come into your life at a later time, you’re trying to figure out okay, so how is this going to work?”

Clifton and Derrick also have worked together before so when Clifton found out Derek was involved in the T.D. Jakes produced the film, he wanted to be a part of it. “I learned some stuff about myself. I learned some stuff about being in that environment because I’ve tried to direct before and I had to go back after that film, and you know, make sure I was prepared as I need to be and to make sure I understood how to handle all of the things that come up on the set. So I, again, take my hat off to Derek. It’s a wonderful project. Everybody did a great job,” he said.

“In today’s society where you are seeing a lot of things on social media, you only get to see one side or what’s going on and you can be envious of things that you don’t see … hopefully [Envy] will give people an opportunity to see both sides of that story,” Derrick said.

Tiffanie Cooper (Keri Hilson) is about to have the wedding of her dreams to her soul mate, the dashing Damon King (Tobias Truvillion), founder of King Enterprises. When Damon’s old friend Trey Taylor (Durrell “Tank” Babbs) arrives, fresh from prison to step in as Damon’s best man, Tiffanie’s whole world gets rocked. Trey triggers a passion in Tiffanie that she never expected, and suddenly the life she’s always planned with Damon is uncertain. Trey still carries wounds from his history with Damon, and his intentions toward both Tiffanie and Damon are not to be trusted. Lust: A Deadly Sins Saga also stars Ms. Juicy, LeToya Luckett, and Clifton Powell and is produced by TD Jakes Enterprises and Big Dreams Entertainment. T.D. Jakes, Derrick Williams, Leslie Greif, and Shaun Robinson serve as executive producers and Star Victoria directs from a script written by Sonay Hoffman.

Gabrielle Flores (Rose Rollins) has it all—a devoted husband, a beautiful daughter, and one of the best PR firms in the country. When Gabrielle’s father suddenly reveals she has a half-sister, Keisha (Serayah), as a result of a brief affair, only-child Gabrielle is delighted to welcome her into her life. But Keisha, who grew up with nothing, wants more than a sisterly bond from Gabrielle—she wants her life and is willing to do whatever it takes to get it. Envy: A Deadly Sins Saga also stars Kandi Burruss, Donovan Christie Jr., Gregory Alan Williams, Da Brat, DC Young Fly, Clifton Powell, and Hosea Chanchez and is produced by T.D. Jakes Enterprises and Big Dreams Entertainment. T.D. Jakes, Derrick Williams, Leslie Greif, and Shaun Robinson serve as executive producers, and Damon Lee directs from a script written by Nneka Gerstle.