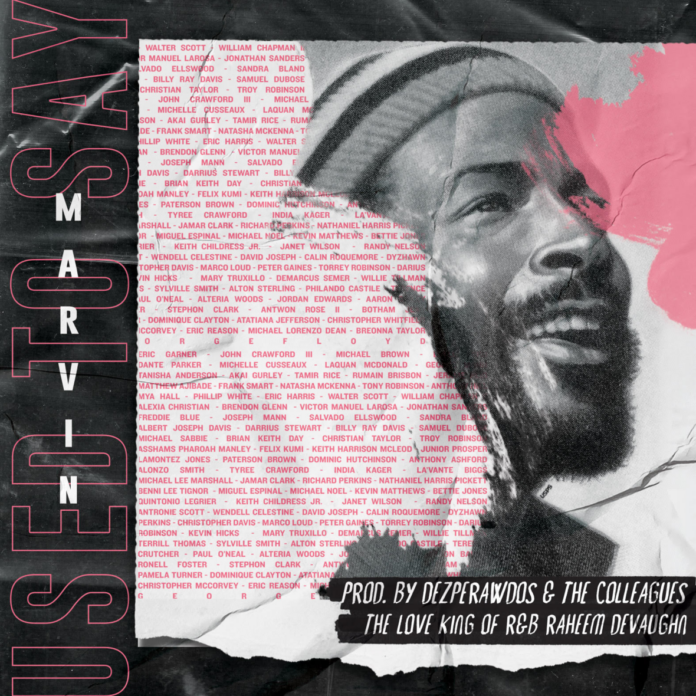 For over a decade, singer Raheem DeVaughn has been on a mission to create music that evokes change while maintaining the energy of love. He pushed that goal forward with the release of his latest single, “Marvin Used To Say.” The poignant and timely song speaks directly to the ongoing social turmoil and the unfortunate fact that not enough has changed since fellow D.C. native Marvin Gaye asked “What’s Going On?” nearly 50 years ago.

“This time-period piece of visual art is a tribute to the musical icon & legend Marvin Gaye. In celebration of his birthday and artistry, I recorded the song “Marvin Used To Say” back in 2020. Later this year, I plan to release an entire album in honor of him as well,” DeVaughn stated in the description of the new music video.

Over a soothing, guitar-driven track produced by The Colleagues, DeVaughn sings the plight of the people, the sometimes disheartening feeling that our prayers fall on deaf ears and even the added uncertainty created by COVID-19. But he also sings hope and encouragement, not just through the song’s lyrics, but with a direct shout out to community and thought leaders like activist Tamika D. Mallory, journalist Angela Rye and rapper Mysonne.

What A Time To Be In Love, produced entirely by The Colleagues, finds the three-time Grammy-nominated crooner fully embracing what he sees as his social responsibility: to inspire and encourage his listeners as they fight for justice and equality. While the album is defined as movement music, DeVaughn recognizes the importance of also nurturing and encouraging the emotional connections needed to sustain us during this fight. As such, fans can also expect the new album to embody and reflect the musical legacy that has earned the singer his place amongst R&B royalty as the “Love King.”