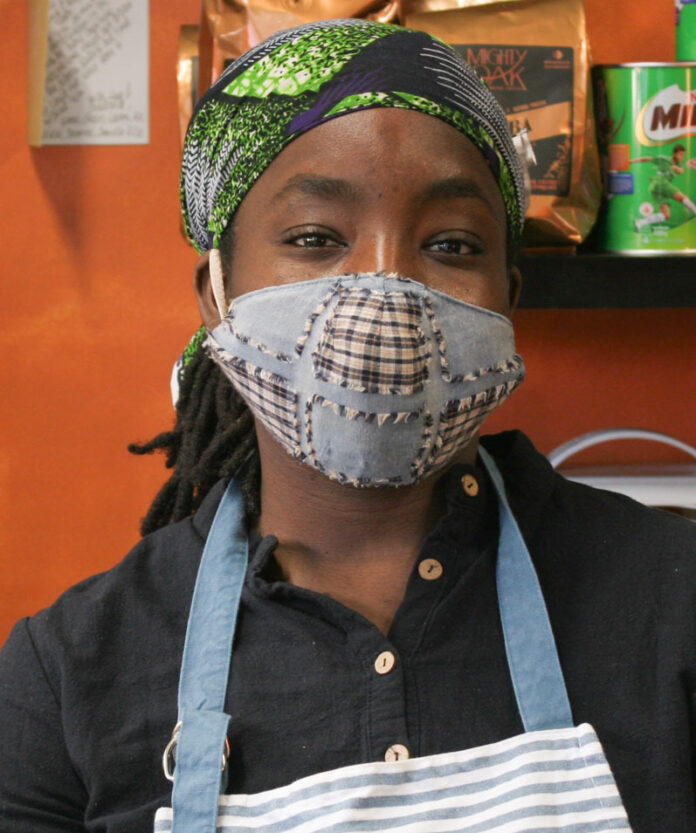 New York native and founder Beatrice Ajaero has a mission to make African food mainstream in a way that is environmentally, socially, and economically sustainable. With the strong support of her younger siblings and mother, Ajaero has created a welcoming, colorful space in Astoria, Queens where she serves vibrant, flavorful and nutrition-packed small-batch soups and stews such as egusi (melon seed), West African red stew, okra and spinach, and yassa (onion, mustard, black pepper) as well as spicy goat stew, which are served with sides of garri (cassava) or fonio grains.

Ajaero’s interest in making African food accessible and sustainable came from her experience being far away from home during college, and not having many West African food options available in her college town north of New York City. Because of this, she soon discovered that she wanted to share more of the cuisine as it connected the diaspora with a broader audience and community.

“I thought a lot about access to West African food when I was in college,” said Ajaero. “And I think particularly when I was in law school in Buffalo because it was a college town and was where my parents came as immigrant college students in the 80s. I was about eight hours from home, so I thought a lot about how increasing access to foods like that could really curb homesickness, and at the same time offer enrichment to classmates or colleagues who are looking to try different cuisine. I think I was really inspired to just think more about it in a concrete way.”

Ajaero’s education has helped her prepare for her business in many ways, as she earned an MBA from Bard College’s MBA and Sustainability program and a law degree from the University of Buffalo’s law school. Her capstone project during her studies at Bard College was even focused on the research of West African food options available around her college town. She just always knew that food was something that she wanted to be around in some way or form—food was a very important aspect of her community during her childhood upbringing, so she wanted to create that same sense of community and culture in the Astoria, Queens neighborhood.

“I think that the program there for me was a program that allowed me access to all of the cultural, social and historic amenities within the city and allowed me to learn what I was passionate about,” said Ajaero. “It really [propelled] me into what might allow me to combine my interests around sustainability and the environment of food, culture and art.”

This new venture is also an evolution of her family’s stand at the Roosevelt Island Farmers Market and her first venture, Ibari, which she opened in September 2019. Ibari originally featured hard-to-find packaged, nonperishable foods from Africa and the Mediterranean, home décor, accessories, art. “We felt like it was a gathering point for the community once a week,” said Ajaero. The boutique sold shea butter and African black soap to the local community as well as to international visitors from Eastern European countries.

“[Ibari] really showed me how far things like shea butter and black soap, which are very common in the Black community, have really impacted international neighbors who may have never seen shea butter or black soap before, and now they take it with them when they travel or now only use shea products,” said Ajaero. “It really had a remarkable impact.”

The Astorian neighborhood where Nneji is located is very welcoming of different cuisines and embraces food from different cultures, as Ajaero has been able to curate a space for neighbors to learn more about West African foods and traditions. The neighborhood has also given a very warm reception of Ajaero’s restaurant, and Ajaero shares that she is grateful to have her Nigerian culture represented there.

“Every day, we are really grateful for a chance to share deep conversations about recipes and about the similarities and differences in food traditions,” said Ajaero. “We expect and invite visitors to stay and learn more about our culture. Our social media presence is there, but we are really built on conversation at all of our locations. And we’ve been really happy to have a chance to maintain that and extend our culture to them.”

Two southeast Nigerian specialties just debuted on the menu, one including greens such as spinach, calilou, bitter leaf and a slow-cooked meat and fish stew with beef, dried Norwegian cod, and bacalao (Edikang Ikong) that was named by Gothamist as one of the best new dishes of 2020. In warmer months, Nneji’s menu includes a rotation of cold dishes like tropical mango-papaya-red pepper salad, tahini-rich hummus, and baba ghanoush. Ajaero is an advocate for incorporating nutritious, lesser-known grains and starches into meals and her shop is stocked with dry versions to buy and try at home.

When asked how she wishes to continue to celebrate and preserve the heritage in the surrounding neighborhood, she says she is hoping to push the mission forward by one visitor at a time, one conversation at a time and one product at a time. “We’re really hoping that we can continue to curate a set of products (like the shea butter and black soap) that offer nourishment, wellness and heritage sharing,” said Ajaero. “We want to extend the essence of what we’re doing over a longer period of time.”