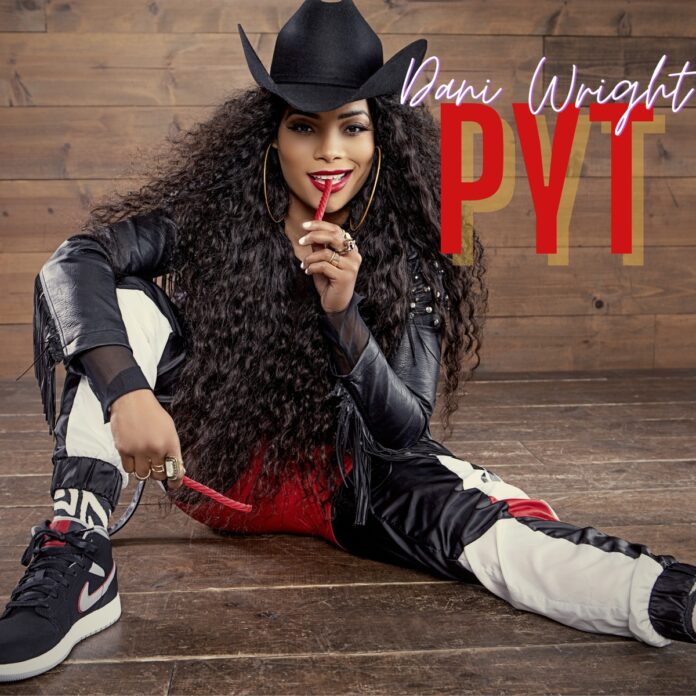 More Black artists continue to flourish in Country music. Singer Dani’ Wright is prepared to share her story with the world through her single, “P.Y.T.” Wright has built a career for herself, including writing for Empire. Now, she is celebrating the new single in her hometown, New Orleans, Louisiana with various virtual promotional performances and a listening party at Clubhouse hosted by award-winning actress Tisha Campbell, who is now Dani’s manager.

This new release by this saucy-gifted Country vocalist is her stance in being authentic in her skin as a woman and celebrating her NOLA roots. According to the press release, on signing Wright as her first artist, Campbell said, “Dani Wright being the first artist from my company makes me so excited. She’s been through so much and it’s about time the world heard her. With my company, I want to make sure I have artists I believe in and that I also admire. She inspires me daily and I can’t wait for her to inspire others. As a Country artist Dani has a soothing, soulful sound to her voice that the world will love. Not only is she my artist she’s also my writing partner and in writing this song it was fun and told who she was.” Please see ENSPIRE Magazine’s interview with Wright on her passion for music, “P.Y.T.,” and expanding Country music to the Black community.

Where did your interest in country music stem from?

I’m from New Orleans and you know, being from New Orleans, we have a mix of genres, from Jazz to Blues to Folk to R&B, Bounce music, and Country. So, it’s one of those things where I just picked it up as a kid, and I loved it, and it stuck with me ever since. But just like all the other genres have before, Country music was the main one that kind of spoke to my soul, my being. Louisiana has a lot of different music … but again, Country was just one of the ones that stuck with me, and you know, just for writing purposes and the storytelling and stuff like that.

Why is it important to break the ceilings as a Black woman in country music?

I feel like I was a person that didn’t think I could do it because I didn’t see anyone that looked like me. So, I think breaking that thought process, for me, is one of the things I wanted to do. So I would love to give more people, little girls, little boys so can be like, “Oh, I see somebody that, you know, resembles me, and that does something that I can do.” The great thing is there are more artists of African American race that are doing Country music. So, I think it’s amazing. I think that’s probably one of the main things again because I was the person that said, “Oh, I don’t see anybody that looked like me so let me just do the easy thing and do R&B and Pop and all that. So, that’s the main thing. The ceiling, I want to break it.

Who are you inspired by? Is there somebody that was inspirational for you when you got into the industry?

What was it like meeting Tisha Campbell and having her as your manager?

I mean, the funniest thing is, in meeting her, she had a lounge in LA and it was called Xen Lounge and she would do this Friday night thing where people come up, and it was like an Open Mic Night. I was in a group then, but we went there and we kind of did the open mic. Then she came over to the table, she introduced herself and I was a fan. I mean, I’m still a fan. Like, you know, I still watch Martin every day. So, I’m just meeting her, and then from that moment, we all just became super close. Then after my group disbanded, I went to her and I was like, “Well, what do you think, you know, I’ve always loved Country music. I want to do it, I want to do what I love. I think it’s time.” She just started jumping for joy. She was like, “Oh my god, I’m gonna do whatever you need me to do, I’m gonna help you out.” So, she’s been like my number one supporter. So, it’s been amazing, you know, having her and learning from her every single day.  This iconic figure of that whole old-school work ethic, you know, you gotta learn how to sing, dance, all this, and you got to go through media training so it’s good. Especially in this new day and age to not take anything for granted.

What was the inspiration behind your single “P.Y.T?” Why should more people stream the new single?

So, my song was basically about introducing myself to people as myself. So, I’m from New Orleans. I’m from the south, I can cook, and I wear cowboy hats, Jordans, and hoop earrings. I wear red lipstick, I work, and again, I wear sneakers, I do this whole thing. Even with the sounds, I love trap music and I love Country music. So, this song was really about me bridging the gap of everything that’s in me. As we know Gumbo is from New Orleans. We’re all just a big old pot of gumbo. So, I’m just trying to mix it all together and trying to introduce that to everyone and even our culture who doesn’t think that Country music is a vibe. It’s a whole vibe because even if you go listen to Country music right now, like everything is straight R&B Trap, Hip-Hop, everything, you know what I mean? So I want to be the ones to do that R&B, Trap, and Country. We are kind of pioneers of this genre and I want people to see that and know that, but know that it’s okay for it to be a dope song.

What is your vision for your music career in country music?

That can go far and wide, even writing this album, I’m touching on things that our community doesn’t talk about as much, like molestation and rape. I want to open up not only the Country genre, but the world to just being yourself and it’s okay, and don’t let your past dictate your future and just live and be you. My future I think it’s big. I think it’s bright. If I continue to be me, it’ll be everything that I’m asking and more. I’m in it because I really love what I do and I love helping people. If I have a big ole concert and I inspire that one person, then my job is done.

Wright is continuing to work with Campbell as they make strides in the Country Music industry.  “I want to sing songs and make music from my own personal stories that will be told for generations to come. My stories, my rhythms, my heart, and my truth to be heard and help someone heal, feel, laugh and cry long after I’m gone,” Wright said, according to the press release. Stream P.Y.T. on Spotify, YouTube Music, and Apple Music.

Unsung Presents: Music & the Movement on TV One