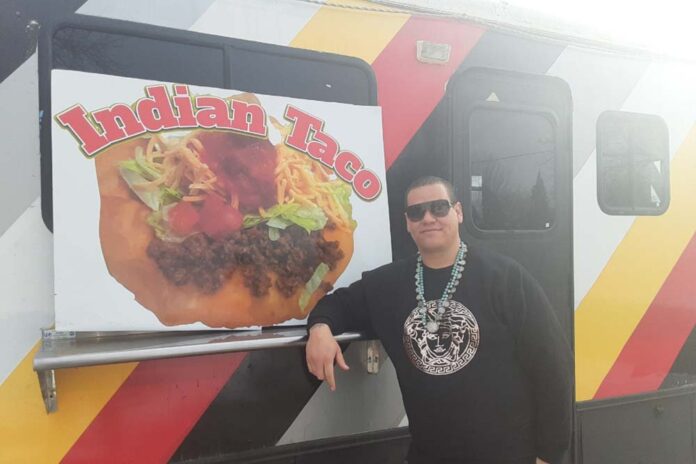 For Native American Heritage Month, ENSPIRE introduces entrepreneur Lawrence West, a proud member of the Cheyenne River Sioux Tribe from Cherry Creek. He’s the owner and founder of Watecha Bowl, which started as a food truck in Spring 2020 in Sioux Falls and has expanded to a storefront this year. The restaurant grew in popularity for its Indian taco, which comprises frybread topped with ingredients found in a typical taco.

While Lawrence West has run and owned several businesses, including a small T-shirt company, he never envisioned himself as a restaurant owner. This all changed in March 2020, when he realized a lack of Native American restaurants in South Dakota and worldwide. So, despite the pandemic’s attempts to put the world to a halt, Lawrence West took the skills he gained growing up in the kitchen and went into the food business.

Watecha Bowl has a growing fan base with over 11,000 people following its Facebook page. Restaurant visitors, both Native Americans and non-Native Americans, come from all over the country to try Lawrence West’s Lakota food. Besides Indian tacos, this restaurant sells burgers on frybread, the Big Indian Dog (a buffalo brat wrapped in frybread dough and fried), buffalo pot roast, and sweet treats. The food is always made to order with the freshest ingredients. The menu constantly changes and is updated on their Facebook page, which gives visitors a variety of Native American cuisine to try. The one element of the menu that remains consistent is the frybread, which is a favorite. Relatives inspire all recipes used for his foods and fair-style food typically served at Native American get-togethers.

What started as a “journey off sheer survival” quickly became a successful eatery today. He told the West River Eagle, “I want to show the world and indigenous people that ‘Yeah, we can do this.’ We can be successful, make it off the rez, and live in both worlds and remain connected. I’m from Cherry Creek, and I got a lot of love for my home.” Lawrence West feels it’s essential for businesses to include more Native American employers to teach them the skills needed to succeed.

He views this business as a way to educate visitors about Native American culture, language and preserve Native American legacy. Watecha Bowl plans on opening locations in Phoenix, Arizona, and Norfolk, Nebraska, this November and is actively working on opening more places. Thus, Lawrence West’s business continues to expand and inspires others to pursue their passions.

Learn more about Watecha Bowl on their Facebook page.