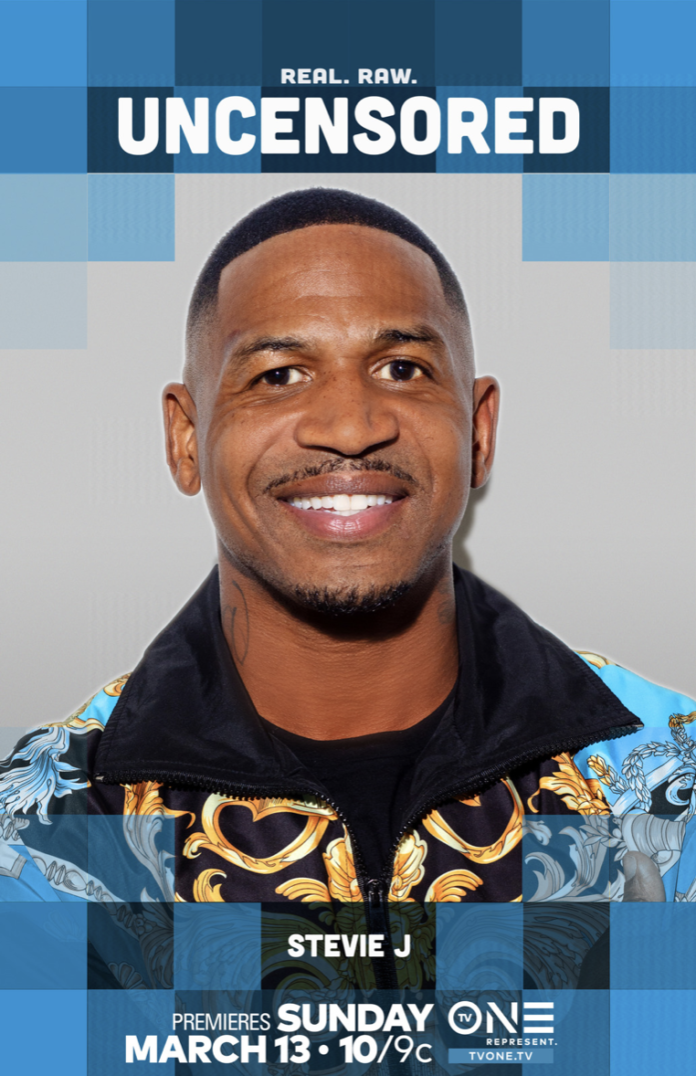 On March 13th, Stevie J and Monie Love fans can hear them share their journey to success stories on TV One’s UNSUNG and UNCENSORED. Trailblazing British rapper, Monie Love, will be on UNSUNG at 9 p.m. ET / 8C followed by hit-making producer, Stevie J at 10 p.m. ET / 9C on UNCENSORED. Each episode will also be published on TVOne.TV and TV One’s social media platforms.

TV One’s signature music biography series, UNSUNG, spotlights entertainment’s most influential and talented artists. This week’s episode highlights Monie Love. Monie made her own lane as a rap star in the late 80s and early 90s with a unique style and socially-conscious lyrics. In this episode of UNSUNG, Monie tells her amazing story that started as a dream and ended up changing the world of hip hop. Besides this, she shares her experience of being in an industry that was male-dominated and her determination to prove her capabilities.

UNSUNG is narrated by actor Gary Anthony Williams and is executive produced by Frank Sinton and Arthur Smith of A. Smith & Co. Productions. Mark Rowland, Kysha Mounia and Jamecia Blount also serve as Executive Producers. For TV One, Jason Ryan is Executive Producer in Charge of Production, and Donyell Kennedy-McCullough is Senior Director of Talent & Casting.

UNSUNG, one of the network’s longest-running series, highlights the careers and explores the personal lives of some of the most talented, versatile, and influential black vocal artists. The seven-time NAACP Image Award-winning series continues the season with equally unforgettable stories from a wide array of artists including Monie Love.

UNSUNG is narrated by actor Gary Anthony Williams and is executive produced by Frank Sinton and Arthur Smith of A. Smith & Co. Productions. Mark Rowland, Kysha Mounia and Jamecia Blount also serve as Executive Producers. For TV One, Jason Ryan is Executive Producer in Charge of Production, and Donyell Kennedy-McCullough is Senior Director of Talent & Casting.

The hit autobiographical series UNCENSORED explores the lives of your favorite personalities as they provide first-hand accounts of their success and the obstacles they faced throughout their careers. This week’s episode highlights the infamous Stevie J. In his episode, he breaks down why there should be no discussion of 90s R&B and hip hop without mentioning his name. He’s most known for his iconic appearances on reality TV, but Stevie J has produced a long list of musical hits during his run with Bad Boy Records and beyond. Now, he’s telling his story in his own words. He also shares how his encounter with Puff Daddy a.k.a. Sean Combs changed his life for the better.

ABOUT TV ONE NETWORKS

TV One Networks is the hub of black culture and entertainment with a broad offering of original programming and classic series, serving diverse audiences for both TV One and CLEO TV. Launched in January 2004, TV One currently serves 49 million households and CLEO TV, launched in January 2019, is the sister network available in 44 million households. Each network has a unique audience that serves viewers with fan favorites from TV One such as Life Therapy,Unsung, Uncensored, Fatal Attraction, ATL Homicide, When Love Kills: The Falicia Blakely Story, Don’t Waste Your Pretty and Urban One Honors. Both networks are solely owned by Urban One, Inc., formerly known as Radio One, Inc. [NASDAQ: UONE and UONEK, www.urban1.com], the largest African-American owned and operated multi-media company.

ABOUT A. SMITH & CO. PRODUCTIONS A. Smith & Co. Productions creates some of the most innovative, highly-rated, and high-quality programming for the domestic and international television marketplace. Founded by Chairman Arthur Smith, an unscripted TV pioneer who was inducted into the Realscreen Awards Hall of Fame and named Broadcasting & Cable’s “Producer of the Year,” the company has produced over 5,000 hours of award-winning programming, more than 200 shows, for more than 50 networks and platforms, with formats sold to well over 120 territories. For two decades, A. Smith & Co. has been a global leader in non-fiction television for productions, including “Hell’s Kitchen” (FOX), “American Ninja Warrior” (NBC), “Profiled: The Black Man” (discovery+/OWN), “Unsung” (TV One), “Welcome to Plathville” (TLC), “American Ninja Warrior Junior” (Peacock), the NFL’s “Pro Bowl Skills Showdown” (ESPN), “The Titan Games” (NBC), “Mental Samurai” (FOX), “Ellen’s Next Great Designer” (HBO Max), “Voices of Fire” (Netflix), “American Gangster: Trap Queens” (BET+), Season two of “Floor is Lava” (Netflix) and more. For more information, please visit https://www.asmithco.com/.