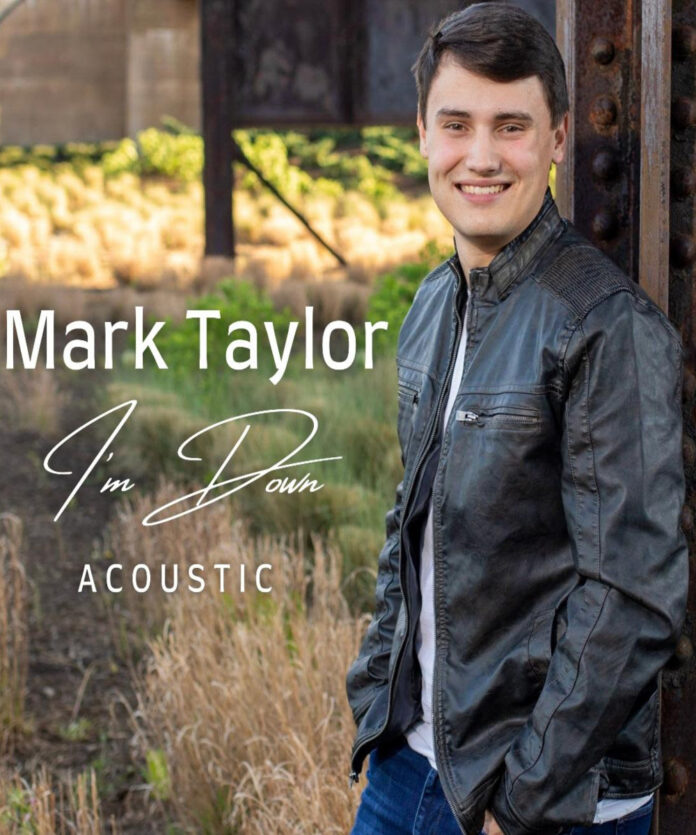 The music industry is full of new artists from all different genres and rising country artist, Mark Taylor, dropped an acoustic version of his chart-topping single I’m Down. This acoustic release offers a newly-intimate listening experience while capturing the warmth and familiar sound of his. I’m Down – Acoustic and the original version is available on all streaming platforms, including Spotify and Apple Music.

In the new acoustic version of I’m Down, which showcases a different side of Mark, the raw vocals shine with the new instrumentation that Leland Grant (Chris Young, Rachel Bradshaw) produced. “Mark is a new artist with the vocal chops of a veteran songwriter,” says Leland. “His energy and excitement are infectious. If you haven’t seen him live, you should do that now before you have to pay $75 through Ticketmaster.”

Written by Mark, he released the full production of I’m Down last year and it quickly became a fan favorite. The song climbed all the way to #11 on the country charts. It achieved success on Spotify’s curated Fresh Finds playlist. Carrying an intriguing melody, and now prestigious stripped-down instrumentation, Mark’s style fuses the storytelling of country with a contemporary influence while putting his own modern country spin on his songs.

“I’m Down – Acoustic is an answer to the fans,” says Mark. “You have supported this song immensely, and I wanted to give you a more raw and unplugged version of this song.”

This tune references remembering the good times, missing the company of a past ex, and suggesting getting back together. Putting the past behind, and focusing on the good memories, Mark smoothly sings his clever and easy-to-follow lyrics “If you’re up for coming over then you know I’m down.” Mark is continuing to reveal a fresh new side to his music with each release and I’m Down – Acoustic does just that. What actually inspires his songs, he says;

“For me, music is a true reflection of what’s happening in everyday life. I love writing songs about what’s going on in my life, but I love writing about other people’s lives also. Creating a story from scratch is also a way I generate ideas and it usually leads to a cool story for the song. Country music is all about the lyrics and it being relatable, so I’ve often taken scenarios from my life and my experience and put them into songs. For me, it often leads to relationships, hobbies, my family, and experiences I share with friends.”

With numerous press and radio interviews under his belt, Mark released his full-length album, One, just last year. He is also continuously on the road performing and wrapped up a successful tour. Last year’s with over 70+ dates on the east coast including spots in Maryland, Delaware, Virginia, Pennsylvania, and North Carolina. His production credits extend across many genres, but most notably produced for platinum-selling artist Lacy J. Dalton.

About Mark Taylor: With a contemplative soul and a charming and down-to-earth personality, Mark Taylor has always seen music as a constant companion that continuously evolves through the many eras of his life. With opening for famed artists including ACM and CMA winner Big & Rich, Matt Dylan, and rapper Wiz Khalifa already under his belt, Mark is one to watch as he takes the country music scene by storm.

Being raised in a musical family in the suburb of Baltimore and drew inspiration from multiple artists. Those being the Allman Brothers Band, the Eagles, and Thomas Rhett. Mark combines the sound of modern country and classic rock for his own unique art. He has played over a thousand shows and completed five tours so far, showing his endless dedication and passion for music. With his sights set on the rest of this year it is only a matter of time before Mark Taylor becomes a household name. All these accomplishments beg the question, what motivates him? Here is what he has to say;

“My biggest motivation for creating music is to help people and to change lives. Just the other day, a stranger stopped me at the store to tell me how much a song I had written helped him get through a very challenging time in his life. It made my day to hear that and continues to inspire me each and every day. It means the world to me that people listen, and as long as people are listening, I’ll keep making music for them!”

Learn more about Mark Taylor by visiting his website to follow along with him on his journey through the music industry.