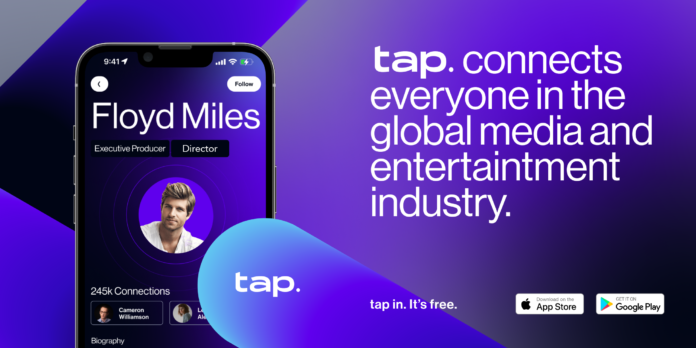 Since the late 1900s technology has been evolving and becoming a highly remarkable mainstream concept. Devices like laptops, phones, tablets, and other forms of technology have allowed for widespread global access to portable connections. Similarly to the domino effect, technology has produced an outbreak of usage in every aspect of life branching towards our schools and major industries. A recently developed app, Tap., has proved itself to be the next big social networking app only for professionals in the entertainment industry.

Tap.’s founder, Jean-Que Dar grew up loving both the arts and music. As his love for the two grew, he began telling his parents that he wanted to become a musician. To his dismay, his mother strongly opposed his desires because of the impression one could not make a living off of their passions alone. Her opinion however did not stop Dar from observing artists and musicians in the entertainment industry as he worked for a biopharma company. Based on his observations, Dar could spot the major dilemma in the industry: there were not enough connections that would allow individuals in the entertainment industry to directly contact each other.

The Tap. app is designed to securely allow professionals in the entertainment industry to access a wide-ranged global digital market of other professionals. Dar’s main priority of security was ensured to be fulfilled through the application’s biometric software. The software was designed to run through a series of tests to ensure the verification of each individual’s identity and honesty in their work. Professionals using the app can search for connections, customize their industry profile, and keep all of their productions in one place. These features of the app make it easy for individuals to catch the attention of the industry’s top leaders in a more direct and organized fashion.

Dar describes Tap. to be a “blockchain-enabled software that uses predictive artificial intelligence analytics to connect global media networks”. In light of the platform’s beta testing opportunities, many say that Tap. provides certain access that cannot be found anywhere else across the entire technology network.

To register for early access or find more information about the development and purpose of the Tap click here.

Related Articles: Brian White Teams Up with Rico Love and Several Others to Launch His New App Preneur, Gia Peppers is Owning the Media Industry

A Musical Celebration of Black Music: Music is the Window to...