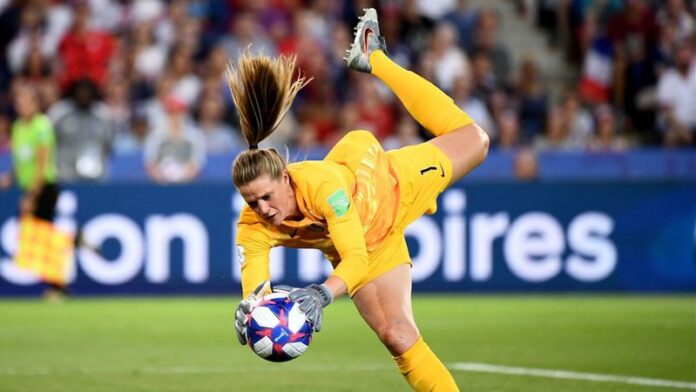 ( ENSPIRE Sports ) With Only Minutes Left On The Clock, Alyssa Naeher Saves the US Women’s National Team As They Advanced To The World Cup

The United States Women’s National Team won a battle against a hard-fought opponent in England. The U.S. was the aggressor and scored a goal within twelve minutes of the game and went up 1-0.

Christen Press scored the first goal after her teammates pushed the pace and gave her an alley to get the ball over England’s Carly Telford outstretched arms. The goal was just the start of a magical ending for the United States.

The U.S. controlled the first half of the match, but in the second half, their defense was lackadaisical, which cost them big time. England’s offensive weapon Ellen White snuck in a goal, while the defense of the United States was not set, which made it 1-1.

After that huge mistake, the U.S. found their rhythm and found a cutting Alex Morgan who found the net and the U.S. went up 2-1. England tried to put pressure on the U.S, but nothing was working until Ellen White was on the verge of scoring another goal, but was tripped up. England was awarded a penalty shot and it looked like the game could go into overtime.

Steph Houghton took the penalty shot for England and Alyssa Naeher blocked the shot. Naeher’s saved earned the United States a spot in the World Cup on Sunday!