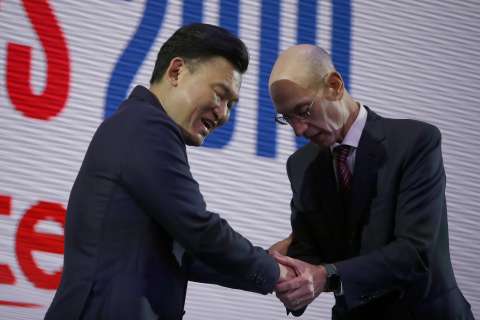 NBA games set to take place in Shanghai and Shenzhen have been canceled because of a tweet that Rockets’ General Manager Daryl Morey tweeted about supporting protestors in Hong Kong.

China representatives responded to the statement and did not hesitate to tell Silver how they felt. “We’ve noticed NBA commissioner Adam Silver’s response to the inappropriate remarks by Houston Rockets GM Morey. We are strongly unsatisfied and opposed to Adam Silver’s claim of supporting Morey’s rights of having freedom of speech,” sports channel CCTV5 said Tuesday on its social media page. “We think any remarks that challenge national sovereignty and social stability are outside the category of freedom of speech.”

The domino effect that has risen because of a tweet by Morey has affected the Rockets’ organization and the NBA greatly. The Rockets and the NBA have lost some endorsement deals with China and money will be lost as China has decided not to sell tickets for the Nets vs. Lakers’ game.

This situation has gotten ugly and all the NBA wants to do is resolve the issue and move forward to another upcoming season. It will be interesting to see if this situation could get solved.

The New Episode of Scoop B Radio Features Rev. Jackson

Monica McNutt, Health and Wellness and Representation for Women of Color