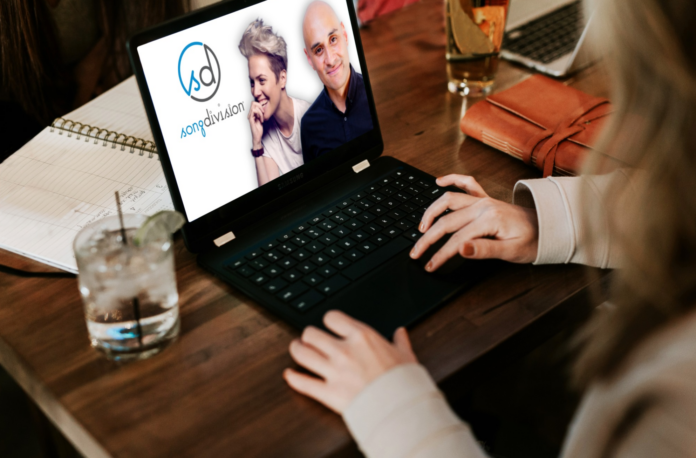 As more people are working from home now than ever before, the need for virtual meeting solutions is on the rise. SongDivision, a global provider of collaborative musical experiences for the events industry, has created a virtual version of its award-winning songwriting experience in an effort to unite teams all over the world through the power of music. Beginning as a songwriting workshop for indigenous youth in Australia, SongDivision has united Fortune 500 companies around their core values using interactive songwriting experiences for the past two decades. Since 2003, the company has spearheaded the use of music to merge corporate culture by employing scientific principles of music to reinforce social bonds and increase emotional connection.  Andy Sharpe, the founder of the company, explained how the process of creating music affects the mind.

“At the moment, during the lockdown, there is a lot of cortisol, which is the stress hormone. The main thing we do is get people to write songs,” Sharpe said.  “That process, when you create music, you actually release oxytocin into your body that puts you in a positive headspace.” With remote meetings currently at the forefront, and music’s ability to meaningfully and creatively connect people, the company has now converted the same songwriting experience they deliver live for thousands of people worldwide to the virtual space.

Remote Team Anthem is one of several programs SongDivision has created to bring teams together in a creative way during COVID-19.  The 90-minute program takes up to twenty participants on a collaborative journey, inspiring them to express key messages, such as team goals and core values, through an original song they create. The session takes place on a secure online platform and is led by SongDivision’s world-class musicians who have worked with popular stars such as Cher, Prince, Katy Perry, Drake, and more. No musical experience is required to participate.

“We have been working on releasing Remote Team Anthem for some time now. Companies have shown a growing demand for additional team touchpoints to complement their annual meetings and conferences. Clearly the demand for virtual team building solutions has risen of late, and we’re pleased to give companies a creative and meaningful solution using music,” said SongDivision CEO, Andy Sharpe.

Sharpe is a musician himself, having a history of writing songs for Australian pop stars and being in a UK-based pop band in the early ‘90s. After the band broke up, Sharpe found himself working for IBM in a finance role while still writing songs for artists. He was also asked to get involved in songwriting workshops for indigenous children in Australia.  One day, Sharpe’s friend asked him if he could do the same workshop he was doing with children with his sales team.  At first, Sharpe was unsure about the idea.

“I’m not really the team-building guy. But he was very persistent,” Sharpe said. “So I ended up taking, you know, 30 executives into our sales team into a famous recording studio. I brought in some famous session music and the session musicians in Australia who are part of the band on The Voice in Australia,” he said. By the time they were finished with the workshop, Sharpe said he couldn’t get them out of the studio because they were having so much fun. “That feeling is what we share with people. They’re in there, they work with these great musicians, but their words are what is going into the song,” Sharpe said.

After live events were canceled due to COVID-19, SongDivision started hosting free virtual happy hours in each of the markets the company operates in. The virtual happy hours are hosted through Zoom by SongDivision’s professional musicians and are free for anyone to attend. The sessions are entertaining and uplifting in nature and include virtual live performances by performing artists, rock-n-roll trivia competitions, and prizes. Participants also get to join in on “venting sessions,” where they can share what is driving them nuts during lockdown, and what they have learned about their partners, kids, and pets that they didn’t know before. All of this eventually ends up in an original song created by the entire group that is written and recorded at the end.

“It’s developed a whole new muscle for the business,” Sharpe said. “When it opens up, there are going to be so many live events, so I think we’re going to get very busy, but I don’t think the virtual sessions are going to go away, either.”

Sharpe said with all of the bad news in the world, it makes a difference to do positive things such as learning an instrument, listening to music, or reading inspiring stories.

“Life, in general, is stressful and beautiful, and taking the time in people’s busy days to do something like reading inspiring stories that you guys produce, or to learn an instrument, listen to music, or go see a band virtually can make a difference,” he said.

Jonathan McReynolds Is Back With A New Single ‘Your World’