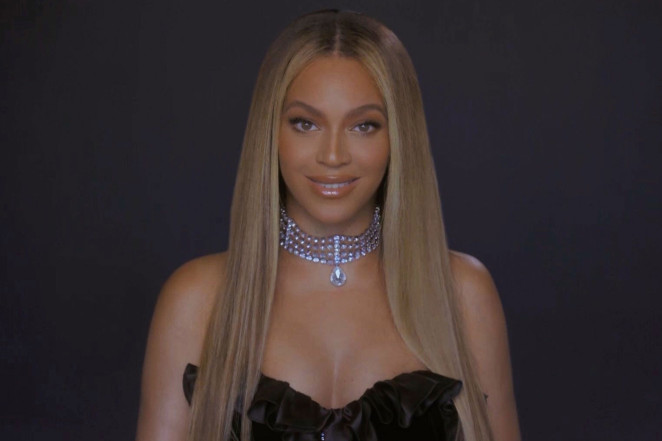 Former first lady Michelle Obama presented Beyonce with the 2020 Humanitarian of the Year Award at the BET Awards Sunday night. In a video presentation highlighting Beyonce outside of her music, Michelle said, “ I am here today to talk about The Queen — you know the one. Ever since she was a little girl in Houston, Beyonce Knowles Carter has been lighting up stages and gracing the world with her talent, with her generosity of spirit, and with her love for her community.”

“You can see it in everything she does. From her music that gives voice to Black joy and Black pain to her activism that demands justice for Black lives. And no matter how big the stages get, I know my girl isn’t satisfied unless she’s sharing all that shine she has with the next generation.” she added.

The iconic singer was praised for her amazing charity work and philanthropic efforts, including the recently launched BeyGOOD’s Black Business Fund initiative. Through her BeyGOOD initiative, Beyonce created “Formation Scholars” in 2017 to support young college women, and scholarships were awarded that year to college women pursuing studies in the creative arts, music, literature, or African-American studies.

When the COVID-19 pandemic began, Beyonce collaborated with her mother Tina Knowles Lawson for the #IDIDMYPART mobile testing initiative with the BeyGOOD Foundation to support the black and brown communities in Houston disproportionately affected by the virus.

Beyonce also partnered with Twitter CEO Jack Dorsey’s #StartSmall to deliver mental health relief during the pandemic through a $6 million pledge to combat mental illness through local community-based organizations. One of Houston groups receiving funding is United Memorial Medical Center, as they have been at the forefront of fighting against COVID-19 by supplying six different testing locations in and around the Houston area.

During her acceptance speech on Sunday, Beyonce said she wanted to dedicate her award to the Black Lives Matter Protestors, to all her brothers and sisters out there that are “inspiring, marching and fighting for change.” as protests nationwide and around the world continue against racism and police brutality following the police killing of George Floyd and more.

“Your voices are being heard. You’re proving to your ancestors that their struggles were not in vain. We have one more thing we have to do, and that is to vote. I’m encouraging you to continue to take action, continue to change and dismantle a racist and unequal system,” she says.

“We have to continue to do this together, to fight for each other and lift each other up. There are people banking on us staying home during local elections and primaries. We have to vote like out life depends on it — because it does,” she added.

Just before the BET Awards aired Sunday night, Beyonce made an Instagram post in support of passing the HEROES Act — a bill that combats voter suppression by providing a financial safety net to protect the black and brown communities. The act would cover health care, housing, justice system reform, and equal access to voting.

The Grammy-Award winning singer released a new single on Juneteenth called ‘Black Parade’ that paid homage to her ancestors, heritage, and womanhood. Her new initiative by the same name will promote black-owned businesses, as all proceeds from ‘Black Parade’ will go to BeyGOOD’s Black Business Impact Fund.

Beyonce also announced her new visual album, Black is King, will be released July 31, which will be available exclusively on the Disney+ streaming platform. The album is centered around the music of The Lion King: The Gift, a soundtrack she created while she voiced the character Nala in the 2019 remake.

You can watch a recap of Beyonce’s Humanitarian BET Awards Speech here.