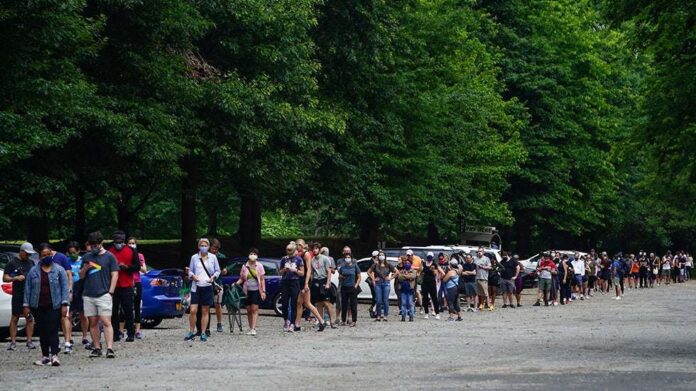 ( ENSPIRE News) Voter Suppression and its Implications in 2020

Growing fears, following Georgia’s primary, of voter suppression have been revealed across the United States. The combination of mail-in-voting through the use of absentee ballots, fewer polling stations, and a handful of other things are making a perfect formula to effectively suppress large numbers of votes, especially in the black community. Voter Suppression, historically, largely attempts to stifle the black and brown vote in inner-cities across the country.

Under President Trump and Republican leadership, they hope they can make mail-in-voting “invalid” or “fraudulent” therefore forcing an in-person vote with fewer polling stations available within cities because of the ongoing pandemic. This is in the process of becoming a disaster for the general election in 2020.

Plenty of warning signs, for voters, were evident within the most recent Georgia primary. Voters were forced to wait extremely long amounts of time on lines and there were voting machines malfunctions. All of this coupled with ill-equipped election site workers added to be a major problem. This issue happened in, most often, in communities with large amounts of resident black voters.

Stacey Abrams, the former Georgia gubernatorial candidate and possible 2020 VP candidate is the founder of Fair Fight, an organization aimed at combating voter suppression and ensuring fair elections, came out with several statements in regards to the primaries.

“Georgia’s primary was an unmitigated disaster, but the solutions are not difficult,” Abrams said. “We need more resources and better training of poll workers and county officials.”

The issue of voter suppression is the epitome of fraudulent and as long-lasting as America itself. People must work diligently to stop this persistent systemic issue within American elections. 2020 must be a fair election.

Democratic leadership must either open-up more polling stations to combat congestion and waiting for lines at the polls or fight hard for mail-in-voting regardless of the baseless claims that it’s “fraudulent” made by the President. Everyone’s health and safety are a primary concern but so are our democratic rights to vote. We must acknowledge that they are under attack right now! What happened in the Georgian primary cannot be allowed to happen during our general election.