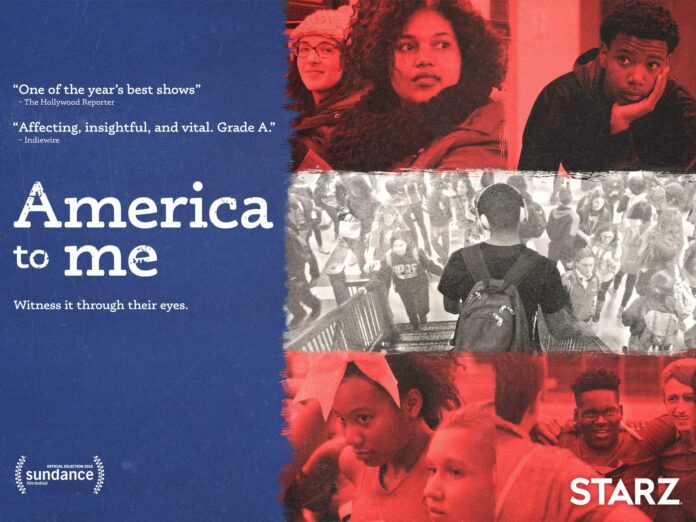 We live in a world where people say “All Lives Matter” as a rebuttal to an equal rights movement. Whether people say this out of ignorance, hate, or as alleviation of guilt, it is a completely false statement. All lives will not matter until Black lives matter as well.

This year has been all about educating people on the injustices of our police system, our government, and our society in an attempt to make people more understanding of human experiences different than one’s own. Media and movies have been a major source of education through visual and emotional portrayals of real or hypothetical events. An excellent example of this is the Starz documentary series “America to Me” which aired in 2018 but is more than relevant today.

“America to Me” is a ten-episode docu-series that shows the lives of 12 students over the course of a year at Oak Park and River Forest High School in Oak Park, Illinois. The series begins with these students being asked questions about their school’s first-ever Black Lives Matter assembly of which only students of color were allowed to attend.

Throughout the series, the injustices and systemic racism Black people see every day is highlighted through the experiences of and interviews with these 12 students. The point of view we receive is from the students at the school, so we get a firsthand understanding of what it’s like to grow up being Black in America. “America never was America to me,” is a repeated sentiment that all 12 students express. White people of America rarely take the time to put themselves in the shoes of Black people or think about their experiences.

For many Black people and as we see in this documentary, the first exposure to racism is often in schools. The education system was created for white people. If our nation’s history does not prove that enough, there is evidence of this through what events curriculums choose to include and exclude, what perspectives we are taught on major historical events and the lack of diversity and culture in clubs and electives that are offered. For people who claim that “All Lives Matter,” watching this docu-series will provide insight into why this is inaccurate.

The innocent, raw, and harsh truths that each student shares about their experiences makes this series one that I believe everyone needs to see. We are so used to seeing racism portrayed on television in a blatant and aggressive way that we forget that our society is systemically racist. Racism isn’t always violent. Racism is the looks and comments that an innocent Black child receives from their peers at school because they hear their parents talk at home. Racism is the remark of, “Are you sure you’re in the right classroom,” that the teacher makes when there’s only one child of color that walks into the room. Racism can be violent, but it can also be subtle. “America to Me” shows us what that subtly looks like.

“America to Me” shows the reality of many schools through Oak Park and River Forest high school, which is diverse and well-funded, yet still struggles to address systemic racism. The layered perspectives of this series give us a nuanced point of view that is often left out of mainstream television. We get the reality of Black people’s experience in America.

“America to Me” can be streamed on Hulu or on the Starz website.

Amy Stokes Changes Lives With Her Work in Affordable Housing