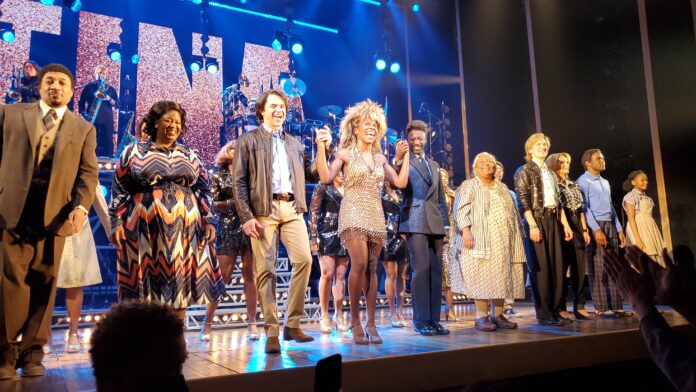 Some may have known the iconic artist and others may have watched the movie. Either way, the story of Tina Turner is not one to take lightly and will surely motivate you. I had the pleasure of watching The Tina Turner Musical at the Lunt-Fontanne Theatre under the direction of James L. Nederlander. The play is based on the book written by Tony-nominee and Pulitzer Prize winner Katori Hall with Frank Ketalaar and Kees Prins. Starring Nkeki Obi- Melekwe as Tina Turner, Nick Rashad Burroughs as Ike, Myra Lucretia Taylor as Gran Georgeanna, and NaTasha Yvette Williams as Zelma.

The show started literally how it finished. You can’t help but get involved in each character because it felt like you were in the room or a part of the situation. It felt too real. This compelling story of a superstar going through tribulations and overcoming them with powerful musical numbers and dialogue held everyone’s attention from beginning to end.

At one point, I wanted to throw my cup toward the stage at Nick Rashad Burrough who played Ike Turner. He played ‌the role well enough to evoke some curse words and gasps from the audience. Even NaTasha Yvette Williams, who played Tina’s mom Zelma, received several choice words of her own from the audience. They were obviously the two least favorite characters.

There were moments of sadness and uncertainty, but to see how far she had come aligned with the familiar melodies and songs made it so enjoyable.

Before watching and after you enjoyed the musical, you had to be a Tina fan. We guarantee this show will have you stomping your feet, side-talking, cheering for joy, clapping your hands, and dancing. The costumes and set transitions were aesthetically pleasing and allowed the viewers to follow along.

Musical ensembles included “I Want to Take you Higher,” River Deep-Mountain High,” “Proud Mary,” “I Don’t Wanna Fight No More,” “Disco Inferno,” “I Can’t Stand the Rain,” “What’s Love Got to Do With It,” and “(Simply) The Best.”

Tina the Musical on Broadway is a must-see! Get your tickets here!

A special thank you as always to Tony Award Winner, Irene Gandy and Celebrity Photographer and CEO of Blink of an Eye Photography, Rowena Husbands.

Multi-Talented Y’Anna Crawley Releases EP This is Me