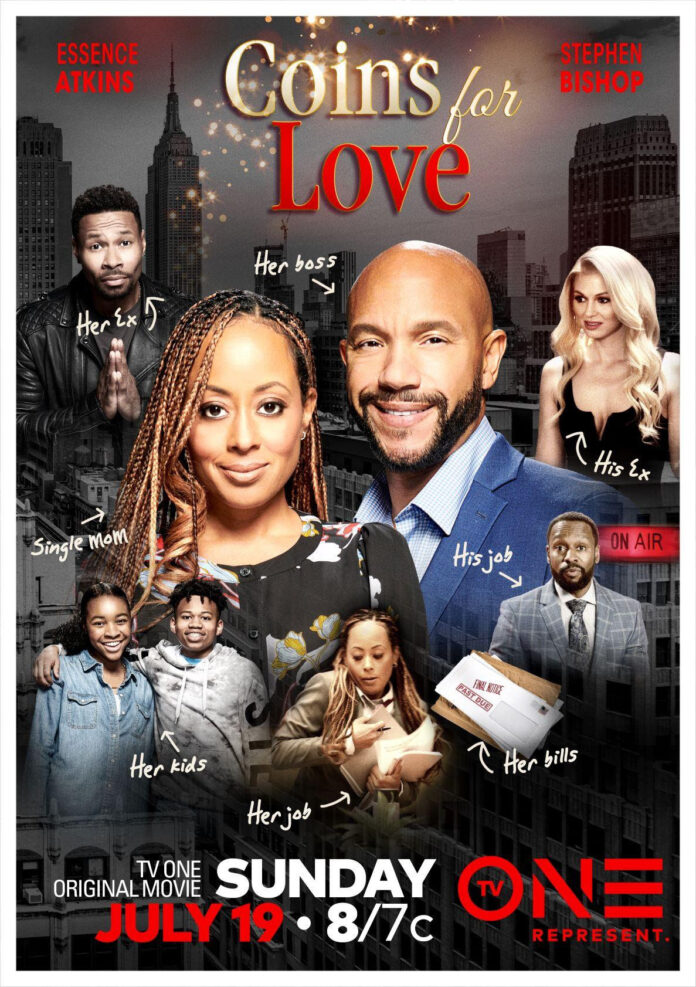 To say the least, so far this has been a summer of binge-watching and streaming shows and movies entertainment-wise. With everything shutting down, trying to reopen, and continuously upsetting news regarding racial injustice, people have been looking for some temporary relief. TV One is coming through with something new and fresh for everyone to watch at home, “Coins For Love.” The film stars Essence Atkins, Stephen Bishop, TC Carson, Karon Joseph Riley, and Kendrick Cross, from the sequel to “Coins For Christmas.”

The cast has been busy promoting the new movie but has also made time to address some issues facing our country and community. TV One hosted a virtual press teleconference with the cast and creative team to discuss and open up about mental health, COVID-19, and social injustice. It was good to see TV One using its platform and talent to address these issues during this time.

The sequel reunites audiences with single mother Madison Morris (Atkins), who finds herself starting over. Madison lands her dream job at a publishing company. To her dismay, however, she must complete a probationary period and will not receive her full salary until the process is over, leaving her in a financial struggle. With a new career and struggling to make ends meet, she works under the demands of her new job while raising two teens on her own. Making matters even more complicated, she finds herself torn between an old flame and a new love interest.

Take a listen to my interview with Karon Joseph Riley:

COINS FOR LOVE is executive produced by Urban One Founder and Chairwoman Cathy Hughes, written by Susan Banks and directed by Jamal Hill, with casting by George Pierre. The film is produced for TV One by Swirl Films, with Eric F. Tomosunas serving as Executive Producer. James Seppelfrick, Ron Robinson, and Keith Neal serve as producers. For TV One, Jason Ryan is the Executive Producer in Charge of Production, Donyell Kennedy-McCullough is Senior Director of Talent & Casting and Robyn Greene Arrington is Vice President of Original Programming and Production.

Check out the trailer “Coins For Love”

There is nothing wrong with new programming right about now, we all can use it.