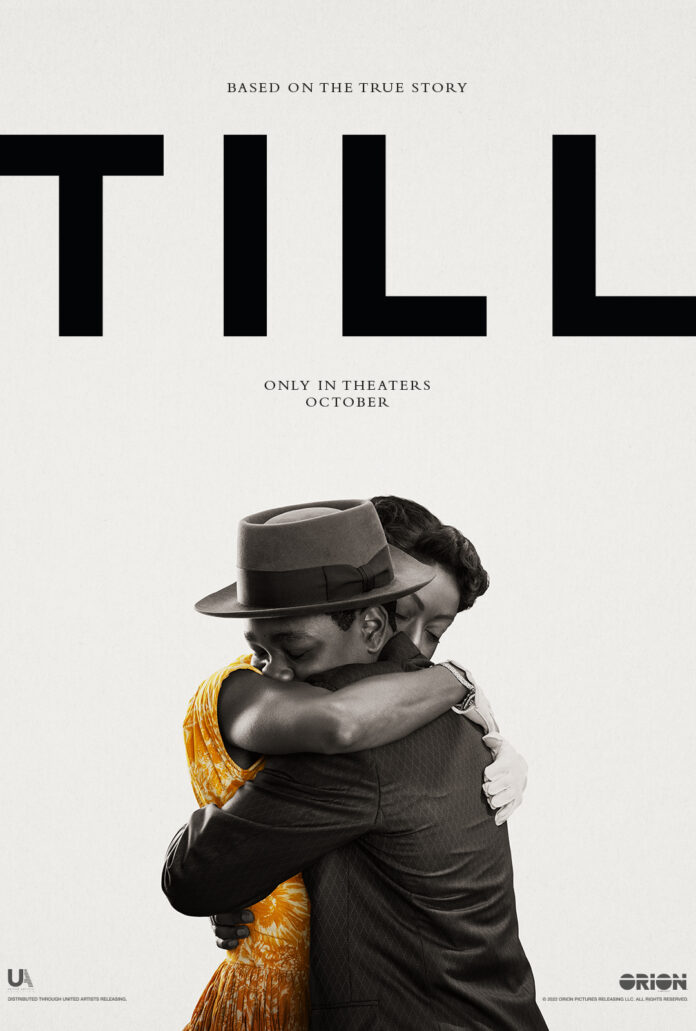 Till stars Danielle Deadwyler (Mamie Till Mobley), Jalyn Hall (Emmett Till), Frankie Faison (John Carthan), Haley Bennett (Carolyn Bryant), Sean Patrick Thomas (Gene Mobley), John Douglas Thompson (Moses Wright), and Whoopi Goldberg (Alma Carthan). Till is a profoundly emotional and cinematic film about the true story of Mamie Till Mobley’s relentless pursuit of justice for her 14-year-old son, Emmett Till, who, in 1955, was lynched while visiting his cousins in Mississippi. In Mamie’s poignant journey of grief turned to action, we witness the universal power of a mother’s courage, and ability to change the world. Till was produced by Keith Beauchamp, Barbara Broccoli, Whoopi Goldberg, Thomas Levine, Michael Reilly, and Frederick Zollo. The film is written by Michael Reilly, Keith Beauchamp, and Chinonye Chukwu.

“In her new film Till, Chinonye Chukwu has crafted a bracing portrait of the short life of Emmett Till and the fearless activism of his mother, Mamie Till, whose fight for justice following the murder of her son was a catalyst for the ongoing battle for civil rights in our country,” says Eugene Hernandez, Executive Director of the New York Film Festival and Senior Vice President of Film at Lincoln Center. “Three years ago, Chinonye’s film Clemency opened our New Directors/New Films festival with MoMA, and now it’s our honor to invite her to unveil this vital film at the 60th New York Film Festival, including screenings for students in partnership with Orion Pictures/UA.”

On opening weekend, writer-director Chinonye Chukwu will join her cast and producers at the film’s launch. “I’m incredibly proud and excited to premiere my film Till at the 60th New York Film Festival,” Chukwu commented. “As a filmmaker, to be embraced by NYFF for this particular feature and to have the opportunity to screen Till for youth nationwide is exhilarating. Considering its storied history of programming highly respected cinema, I’m deeply humbled to be in the company of filmmakers I’ve long admired.”

“It is an immense privilege to help bring Chinonye’s singular, cinematic telling of Mamie Till-Mobley’s remarkable story to audiences across the globe,” said Alana Mayo, President of MGM’s Orion Pictures. “Orion is committed to being a home for a broader spectrum of creative stories and storytellers, so to be recognized by NYFF for Till is a tremendous honor, and we look forward to sharing Chinonye’s beautiful film with festival audiences and students across the country in October.”

In a partnership to ensure this film can be seen by younger generations across the country, the New York Film Festival, MGM’s Orion Pictures, and United Artists Releasing will collaborate with community partners to invite high school students to special screenings with the filmmakers in attendance at Alice Tully Hall during the NYFF60. In addition, the film and post-screening conversations will be shown simultaneously to students in cities across the US, bringing part of American history and the New York Film Festival to new audiences. The dates for the premiere and community screenings will be announced as part of the full lineup and schedule for the NYFF60.

“We cannot wait for audiences everywhere to see the poignant, revealing, heartbreaking yet inspiring film that is Till. This film centers my cousin Mamie Till Mobley in a startling, powerful way – it focuses not just on Mamie’s grief, but also on her heroic efforts to get justice for her son, Emmett. For people who fear that they will be traumatized by this story, audiences should know it is first and foremost the story of a mother’s love. Some will even be surprised by Mamie’s fearless commitment to showing the truth.” said Deborah Watts, cousin of Mamie and Emmett Till and co-founder of the Emmett Till Legacy Foundation. “Seeing this film made is yet another milestone for our family and a testament to Mamie’s fight for justice and to our commitment to legacy. The power of history turning tragedy into triumph is something Mamie would have wanted all of us to do.”

Returning every fall to celebrate a new slate of essential cinematic offerings from around the globe, NYFF has been an enduring part of New York’s rich cultural and historical landscape since 1963. Produced by Film at Lincoln Center, the 60th edition will run for 17 days and promises another year of incredible film offerings from around the globe. Festival Passes are now on sale. NYFF60 tickets will go on sale to the General Public on Monday, September 19 at noon ET, with early-access opportunities for FLC Members and Pass holders prior to this date. Save 20% on FLC Membership when you join online by August 16. Support of NYFF benefits Film at Lincoln Center in its nonprofit mission to promote the art and craft of cinema. NYFF60 press and industry accreditation is now open.

Watch the trailer for “Till” below!