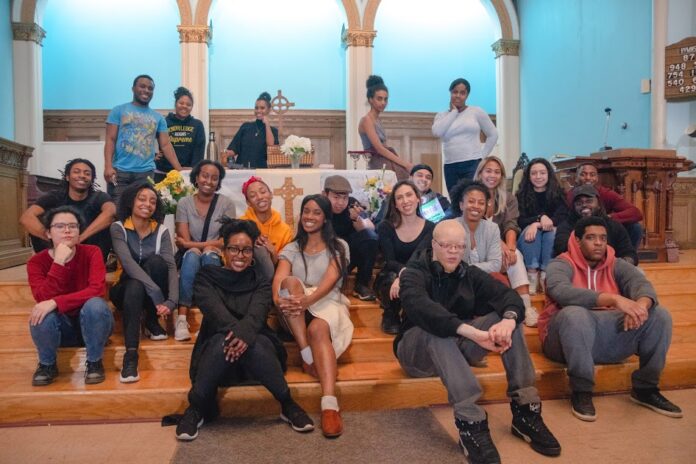 On-screen and off-screen, a Toronto Black women-led production company is taking charge of their narratives and giving Black youth opportunities for success in the industry. The OYA Media Group, headed by Alison Duke and Ngardy Conteh George is committed to the ongoing support, education, and promotion of young Black filmmakers.

OYA makes a point of employing emerging Black youth in their original productions such as Mr. Jane and Finch and encourages producers to hire Black youth in projects they direct such as ‘Cool Black North’. This mandate is in place to change the widespread anti-Black racism in the industry and the unconscious belief that quality is compromised when you make diversity a choice.

This year Canadian Screen Award-Winning Director Alicia K. Harris will be the Program’s Filmmaker in Residence. Alicia will be working with Year 3 Participants to create an original Digital Web series produced within the program.

OYA’s program provides opportunities for youth to direct exciting original content with industry professionals. Last year the Fabienne Colas Foundation in collaboration with the Toronto Black Film Festival teamed up with the OYA Emerging Filmmakers Program to provide production support, training, and mentorship to six youths to direct a series of short documentaries. The documentary program called ‘Being Black in Toronto’ aims to change old narratives and expand beyond one-dimensional portrayals of the Black community. The project, which was entirely written and directed by the youth participants, was screened at the foundation’s film festivals in Toronto, Halifax, and Montreal and festivals throughout North America. The series will premiere on CBC’s Absolutely Canada in late August or early September.

Participants also produced ‘Confessions’ a short fiction film about consent that was directed by Kristen Lambie and produced by Malachi Ellis and Wanda Muna Youssouf as a group project. A sneak peek of the film was shown during the year two graduation along with four cash awards of $500 donated by local artist, Sarde.

This experience has been so valuable for the youth that had the opportunity to participate.

Fonna – Year 1 said, “Since 2018 to 2020 there has been exponential growth through OYA Media Group and through the Pathways to Industry program because they trusted me and they trusted my skills, and they gave me an opportunity that I never would have had”

Yvano – Year 1 explained, “We got a lot of on-set experience in the program. They would always have these job boards in front of the old office. The first thing you’d see when you walk in was this big board and they had jobs within their company, jobs in the industry, and then internship opportunities. All these lists. From there, we got two opportunities to work on Mr. Jane & Finch and Cool Black North. That was your way in as a production assistant.”

The participants go through a rigorous selection process every year. OYA will introduce their twenty-one cohorts for year 3 next month as well as a slate of new partnerships including xoTO, Insight Productions, the juggernaut TV production company which produces the Juno Awards, The Amazing Race Canada and Big Brother Canada to name a few. OYA is also teamed up with commercial production companies as well as with WIFT-T for a new paid internship initiative.

OYA has been inundated with opportunities for the youth in their program who are graduates of post-secondary film, television, and Digital media programs who are looking for a way into the industry after they graduate. They are thrilled that they can welcome Black youth into an industry that has not always been the most open and accepting. This is just the first step into making society more accessible for everyone.