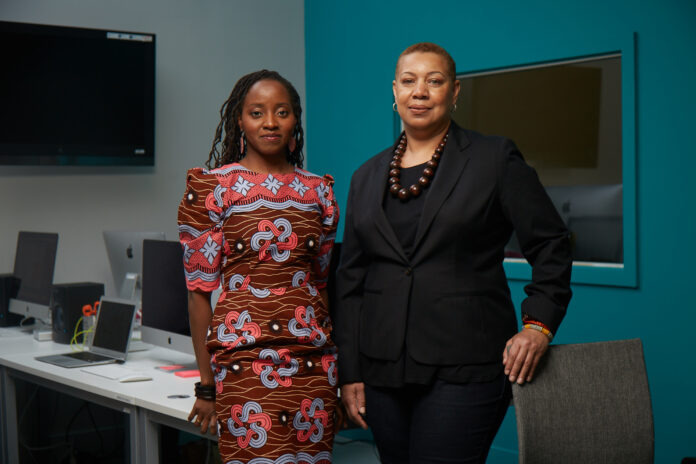 OYA Media Group’s Mr. Jane and Finch documentary, which was directed, co-produced and co-written by Ngardy Conteh George and co-produced and co-written by Alison Duke, won two 2020 Canadian Screen Awards, a celebration of Canadian visual storytelling and the people who bring these stories to life. The CSAs recognize and champion the authentic voices and universal themes that resonate in Canada and beyond. Mr. Jane and Finch explore the life of long-standing community activist and amateur Documentarian, Winston LaRose who has dedicated the last 25 years to support the troubled community of Jane and Finch. With gentrification high up on the political agenda, the man affectionately named Mr. Jane and Finch decided to challenge the traditional powers for the city councilor seat of ward 7. His run for public office reveals how deeply racial politics have plagued the area. Over-policing without accountability and a perennial lack of social services in the area has further marginalized Black and people of color in the community.

In an interview with the founders of OYA Media Group, Alison Duke and Ngardy Conteh George discuss their personal achievements, Mr. Jane and Finch, and their program to support black graduates of film and television.

An artistic activist and passionate award-winning writer-producer-director and Co-Founder of Oya Media Group committed to boldly telling stories of resistance and change. Recently, she co-wrote and co-produced the television documentary ‘Mr. Jane and Finch’ (19) directed by Ngardy Conteh George (and edited by Sonia Godding Tobogo) for CBCDocs POV. The film recently garnered two 2020 Canadian Screen Awards: the Donald Brittain Award for Best Social/Political Documentary and Best Writing for a Documentary. At the same time, she directed ‘Cool Black North,’ a two-hour television documentary special for CityTV/Rogers which went on to be Roger’s top 10 show in February 2019. In 2016, she produced the ‘Akua Benjamin Legacy Project’, the award-winning digital web series which celebrates the legacies of Canadian-based black activists. Inspired by Ava Duvernay, #metoo, and the reality that opportunities for women behind the camera in Canada are long overdue, Alison hired five Black female Canadian directors to helm these legacy films. ‘Promise Me’ (2020) her first short fiction inspired by the seminal HIV documentary, ‘The Woman I Have Become’ (08) is currently touring the festival circuit after winning the Winston M Moxam award for Best Canadian short film at the 2020 AfroPrairie Film Festival. Alison has an MFA at York University in film production and is sought after lecturer. She founded Black Youth! mPathway2Industry, a 3-year initiative to support black youth who are graduates of film, television, and digital media programs access essential training, mentors, networks, and film industry spaces.

Co-founder of OYA Media Group, Ngardy Conteh George is a two-time Canadian Screen Award award-winning filmmaker, a Sundance Institute Documentary Film Program Fellow, and grantee, and recipient of grants from the Toronto and Ontario Art Councils and the Canada Council for the Arts. She is committed to working with marginalized, and often unheard communities, especially those that represent the rich cultures and complexities of the African Diaspora.

Early in her career, with her production company Mattru Media, she produced The Rhyming Chef Barbuda, a cooking show that fused hip-hop with culinary arts, filmed in the Caribbean and aired on Bite TV and AUX TV, and two seasons of Cypher, the flag-ship Hip Hop music show for AUX TV. She also worked as a video editor on the television series Arts & Minds for Bravo! and The Marilyn Denis Show for CTV.

What inspired you to found OYA Media Group?

When Duke and George worked together on the set of Dudley Speaks for Me in 2016, a short documentary in a series about Black Canadian leaders, the chemistry was instant. It’s what Duke describes as a “synergy” between the two filmmakers, personified by their passion for the documentary film, complimentary temperament, and intersecting values: mentorship, authenticity, and progress. Both felt the need to create opportunities for the next generation of filmmakers and give a platform to people from vulnerable communities to tell their own stories all while maintaining a competitive edge. Alongside a strong work ethic, business savvy, and practiced storytelling, their values contributed to a steady creative and business rapport, forcing them to question why they hadn’t merged companies yet. With several decades of experience working as freelance directors, producers, and editors on commercial and big-budget films, Duke and George understand the lonely experience of trying to connect and work with both black and non-black women filmmakers in the professional film industry.

What was the process to create Mr. Jane and Finch like?

Ngardy: Originally our friend connected us because of Winston’s archives. He has been documenting the Black community for years and I had just finished the short film on Dudley Laws where I used a lot of archive footage. I was drawn to [Winston’s] archive and all the material he had and I thought that was where the film was going to go until he decided to run for office.

What is special about Mr. Jane and Finch?

Winston’s archive is a treasure trove of Black Canadian legend.  He had this incredible wall of VHS tapes. He was very particular about identifying what was on every single tape: Lincoln Alexander, Jean Augustine, Louis Farrakhan. It was exciting. He’s recorded several thousand hours of footage, some 50 years old, at pivotal events such as the Million Man March. He’s also documented the lives of some of his community of activist peers, including Dudley Laws and Charles Roach.

“As you were documenting his life, did you see how much he helps his community?”

Ngardy: His presence in the community is needed. He’s much like the superhero without the cape. A lot of the good work he does goes unnoticed because it’s done on an individual basis. He does help on a larger scale but the people that come to him are having problems with their landlord/getting evicted or having issues with being expelled from school or their kids are in jail and need mentorship. Those are the kinds of things I got to see on a daily basis. The people who have come to see him have had their lives changed.

How did you feel when you discovered that Mr. Jane and Finch won two Canadian Screen Awards?

It was an incredibly surreal experience. We wish we had been at the ceremony in person but it was wonderful being with the OYA Team and those working on the film through zoom. Winston LaRose had also joined us when we celebrated the news. We recorded our reaction as well as our acceptance speech which you can watch on all our socials.

“What did it feel like to win the CSA Award for Mr. Jane and Finch?”

Ngardy: It was incredible, I was completely surprised. The nomination was good enough for me. That night I was not expected to win at all, to finally be nominated was a feat. My feeling was, I had already won. To actually win, was an out of body experience, it was surreal and it took about a week before it sunk in. For so many years we had to fight to justify why our stories mattered, so it felt like vindication.  People connected, they got it, they enjoyed it and we did a damn good job in telling those stories. I’m just so proud of it.

What inspired you to create a program to support Black graduates of film and television degree and certificate programs by increasing their access to networking, mentorship, and essential skills training?

In a recently released Focus on Features report, it was noted that while women have made slight advances in key creative industry roles, racialized communities have not shared in the same level of progress. Increasing racial diversity in the film and television industry is important in order to allow the widest range of Canadian audiences to feel included and represented by the content they see on screen. High unemployment rates for Black youth with equivalent educational levels as their peers, leads to lack of work training and experiences in a rapidly advancing technological industry and reduces opportunities for employment in the film and television industry.

The program’s curriculum is based on the knowledge and skills Alison and Ngardy believed that would have been essential to them when they started out. Young people should know what is out there and have access to it. Most people don’t find out about opportunities or support until way later in life.

What success stories do you have from this program?

Through the program and alongside the Fabienne Colas Foundation, several participants were able to direct and write their first short documentaries. The Being Black in Toronto films are now screening worldwide in various film festivals and will be showcased on CBC & CBC Gem on September 19th.

Through a partnership with OPC Productions, Participants from Year 2 of the program were also recently selected to shadow on-set directors for a commercial shoot. Involved in both pre-production and production, both participants gain valuable skills and connections specific to their area of interest.

What’s next for OYA Media Group?

OYA Media Group currently has 3 feature-length documentaries and 2 television series in development. The participants for the company’s Year 3 of the Emerging Filmmakers program have just been selected and will begin orientation in the coming months.

OYA Media Group is revolutionizing the world of film and television through their nuanced documentaries and beneficial educational programs. To learn more, visit their website: