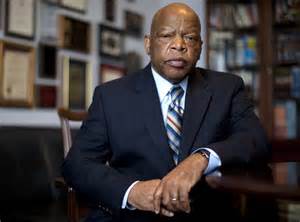 On July 30th in Atlanta, Georgia Congressman John Lewis was laid to rest. Three former presidents came together to attend the funeral. This wrapped up a complete week of memorial services for the longtime public servant and civil rights icon.

Former President Barack Obama delivered a powerful eulogy in which he celebrated the life of John Lewis. “He, as much as anyone in our history, brought this country a little bit closer to our highest ideals,” Mr. Obama said.

“Let’s honor him by revitalizing the law he was willing to die for,” Mr. Obama said, to an ovation at the funeral. He added, “John wouldn’t want us to stop there. Once we pass it, we should keep marching to make it even better.” The former president would go on to list new provisions like automatic registration and making Election Day a national holiday that would help voters across the nation.

Former President Bill Clinton commented on how Mr. Lewis “left us with marching orders” in his recent op-ed that was published in the New York Times on the day of his funeral. In his op-ed, John Lewis urged Americans to continue to get into “good trouble” and continue to fight disenfranchisement within our country. Bill Clinton remarked that Americans have to honor his last request: “Salute, suit up, and march on.”

The funeral followed a beautiful week of tributes for the late congressman which included a memorial service in Troy, Alabama, and a final trip across the Edmund Pettus Bridge in Selma. This was the same bridge where Mr. Lewis was beaten by Alabama state police during the march to Montgomery on March 7th, 1965. This event would later become known as “Bloody Sunday.” John Lewis’s casket then traveled to D.C., where he became the first Black lawmaker to lie in state in the Capitol Rotunda.

A civil rights activist to a fixture of modern American politics, John Lewis has made his mark on American History. Rest In Peace to a legend.