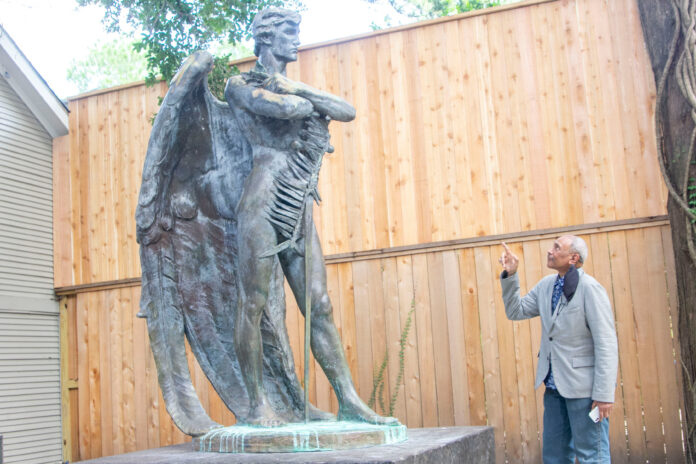 The debate over whether to remove Confederate statues and monuments, many of which were built by white supremacists as a response to black civil rights efforts in the early and mid-1900s, has intensified as a result of the nationwide protests of the George Floyd killing in Minneapolis. The approach to the monuments in Houston has been deliberate and started long before the current debate. Houston Mayor Sylvester Turner established a task force in August 2017 that recommended in a March 2018 report that the statues be removed from city property. In line with the task force recommendations, the city, according to the Mayor, “began working on a plan with partner organizations and funders to identify new locations to place the statues.”

Among the partner organizations, Mayor Turner reached out to were HMAAC, known for its “multicultural conversation on race geared toward a common future,” and the Houston Endowment, which funds projects that “address critical issues in the region.”  Last year the parties came to an agreement on the transfer. Pursuant to that agreement, the museum hosted a one-day symposium “Lest We Forget: A National Conversation with the Confederacy” that included Bernard Kinsey, Los Angeles philanthropist, entrepreneur and co-founder of the renowned Kinsey Collection; Rice University professor James Sidbury, Prairie View A&M University professor Melanye Price, Texas Southern professor Carla Brailey, Sam Houston State professor Brian Matthew Jordan, Maryland Institute College of Art Dean Emeritus and member of the Baltimore Monuments Commission Leslie King Hammond and Lowery Stokes Sims, Curator Emerita at New York City’s Museum of Arts and Design and former Chair of New York’s Cultural Institutions Group. The results of that symposium are documented in an upcoming museum publication, “Houston Joins the National Confederate Monuments Discussion.”

Funding from the Houston Endowment for the monument transfer also funded HMAAC’s Lest We Forget programming of exhibits by Vicki Meek and Aminah Robinson and the   Juneteenth opening of The Souls of Black Folk exhibit as well as lectures from prominent historians and thought leaders, including Johns Hopkins professor Martha Jones, the Smithsonian’s Mary Elliott, and author and cultural historian John Whittington Franklin and our HMAAC Fellow, writer Willow Curry., who is at work now on her first “conversation” with the monument.

Confronting difficult topics is not new to the museum, which has hosted forums on “He Grabbed Them By The Vote: Why Did 53% of White Women Vote for Donald Trump” and debate on “Did The Barack Obama Presidency Improve The Lives of African Americans,” and the Ford Foundation-sponsored Texas Arts for Justice forum on art and prisons.  It has presented exhibits on Sandra Bland, Indifference, The Abolitionists is a part of Ava Duvernay’s ARRAY film distribution and resource collective, and has been recognized by the Alliance of American Museums and MuseumNext.

According to CEO Emeritus John Guess, Jr., who negotiated the transfer, “Unpacking controversial or difficult topics run deep in our organizational DNA. In the case of The Spirit, we think healing comes from taking control of negatively impactful symbols and turning them into teaching opportunities to help ensure they never have power again.”

Gina Carroll, HMAAC Board president when the transfer was negotiated indicated,” We are an institution pushing for change, but also we must be a place where our community can come to heal. I think our supporters respect our receiving the statue and the programming that has preceded it and that will come.”

Current HMAAC Board president Cindy Miles has similar feelings, “The overwhelming majority of people who have reached out to us or we have reached out to, especially those familiar with our history, trust that our ability to take power from this symbol will help our community heal.”

ABOUT THE HOUSTON MUSEUM OF AFRICAN AMERICAN CULTURE

The mission of HMAAC is to collect, conserve, explore, interpret, and exhibit the material and intellectual culture of Africans and African Americans in Houston, the state of Texas, the southwest, and the African Diaspora for current and future generations. In fulfilling its mission, HMAAC seeks to invite and engage visitors of every race and background and to inspire children of all ages through discovery-driven learning. HMAAC is to be a museum for all people. While our focus is the African American experience, our story informs and includes not only people of color but people of all colors. As a result, the stories and exhibitions that HMAAC will bring to Texas are about the indisputable fact that while our experience is a unique one, it has been impacted by and has impacted numerous races, genders, and ethnicities. The museum continues to be a space where a multicultural conversation on race geared toward a common future takes place.


Photos are courtesy of Houston Museum of African-American Culture

Amy Stokes Changes Lives With Her Work in Affordable Housing