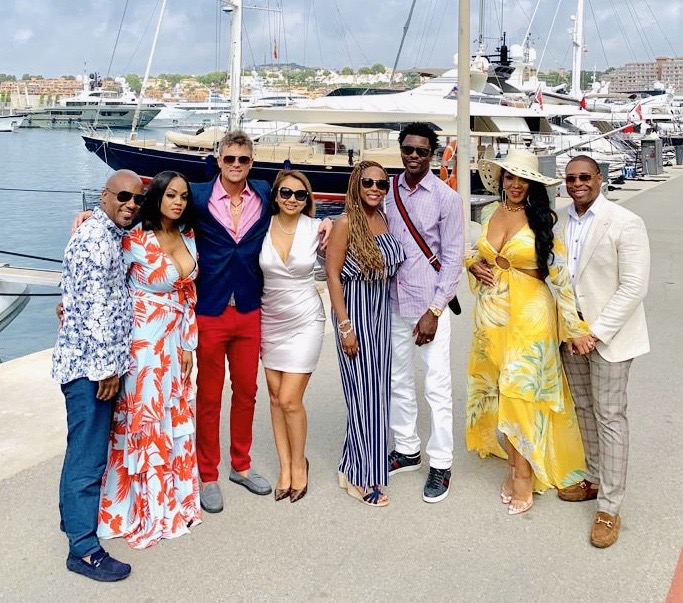 Summer 2020 brought in new waves of diversity in reality TV as eight executives and entrepreneurs, self-dubbed the “Southside” group, made a guest appearance on the popular unscripted series “Below Deck Mediterranean Charter 5” for a double episode. The “Southside” group—four married couples Sean and Crystal Foote, Richard and Karen Bramwell, Corey and Barbara Graham, and Chris and My Lowe—boarded the mega yacht, highlighting black love, interracial marriage, cultural diversity, unity, and positivity as they celebrated two anniversaries and glamorous luxury destinations aboard The Wellington, which aired late August 2020 on Bravo.

The “Southside” guest appearance brought in an increase in TV ratings for the fifth season and became the most diverse episodes the air in the show’s history, offering fans a peek into the lives of these four successful and fabulous married couples who travel the world together, all while remotely managing professional and driving their businesses to new heights.

Sean Foote, a Grammy-nominated producer, turned Wall Street wealth management executive, wrapped up the interview with Travel Noire commenting, “Many people have said that it was an inspiration to see people who looked like us, doing something like this with style and grace. We wanted people to know that you don’t just have to be a ballplayer or musician to enjoy experiences like this.”

About The “Southside” Group

Sean and Crystal Foote, a dynamic Atlanta based husband & wife team with a vibrant 4-year-old daughter, are guided by the power of manifestation towards a life of growth & success.

Sean was born on the Caribbean island of Antigua and migrated to New York City, where he led a successful career as a Grammy-nominated Music Producer. He produced music for Mary J. Blige, Jennifer Lopez, Ma$e, and more. Sean transitioned to a thriving wealth management practice as a financial advisor and portfolio manager for a top wall street wealth management firm while managing and cultivating a personal portfolio of real estate holdings both domestically and abroad. Crystal is a seasoned & award-winning advertising executive, entrepreneur, manifestation coach, wife, and mom, who holds a passion and desire to make a positive impact on the world. This hunger to help foster spiritual connections has led her to host vision board events for various organizations to guide individuals on their journey to turn their dreams into realities.

What is your favorite thing you have done to leave a positive impact on the world?

As a board member of the North Gwinnett Cooperative, we’ve played an instrumental part in the guidance of a ministry that provides food, clothing, financial assistance, and spiritual support to those in need. I’m proud to say that the organization has served over 1,000,0000 pounds of food and served over 100,000 thousand people in need since 1991.

How do you plan to further impact the world in a positive way?

We plan to further impact the world in a positive way by continuing our efforts of donating time and resources to organizations that align with our values and evoke change. Additionally, our organization, Crystals by Crystal’s mission is to help children and adults realize that they too can create the life they desire with visualization and manifestation exercises, such as vision boards. Our vision board events promote a growth mindset to keep individuals motivated to achieve their goals year-over-year.

Richard and Karen Bramwell’s love story began early on as they attended elementary school together, but coincidentally barely spoke as classmates. 20 years later, they reunited at their school reunion and saw they were living parallel lives, though their paths never crossed. Now, as husband and wife, they have become parents of a baby boy who would be the final ingredient to add their “blended & blessed” loving family of five.

As the co-owner of one of the largest minority certified property management & development firms in New York State, Richard enjoys educating and training others, believing that there is room for all of us at the top. He is deeply passionate about sharing the secrets of what it took to develop $500 million in valued real estate projects and navigating 2,500 housing units. As his rock and support, Karen assists her husband with the day-to-day operations of the firm and is also a realtor. Karen truly believes that everything in life happens for a reason, and to whom much is given much is required, with her primary goal centered on always giving back. Richard and Karen’s mission is to exemplify positivity, which will uplift and empower others to live beyond life’s limitations.

Corey met his soulmate, Barbara, at the tender age of 15. Quickly, their love blossomed into a business “partnership” as they ventured into their first business together importing, and exporting wholesale American made garments to Europe and South Africa while in high school.

Corey and Barbara have spent the past few decades cultivating a prosperous real estate investment & management firm. Through the years, they have helped many families fulfill their dream of homeownership and become one of the top African American real estate investors and developers in the greater New York City area and beyond. Together they are the proud parents of two sons and participate in philanthropic activities that give back to those who are less fortunate.

What kind of work do you do to give back to the less fortunate?

We organize trips with our family and friends to provide clothes, money, and food to the less fortunate in Port au Prince, Haiti.

What about your philanthropic activities have you been the most impacted by?

Barbara and I have been the most impacted by seeing the growth in our sons once they were old enough to understand and get involved with our charity missions. It has enabled my family to be more humble and loving towards each other.

Chris and My Lowe are one of the fastest rising, self-made power couples of Atlanta, and known for being the owner/operators of the fastest growing personal injury firm in the south-based Lowe Law Firm. Both have a passion for traveling the world and for delivering unique real estate transformations to their investment fixer-uppers around Atlanta and the Florida panhandle.

Chris, born in Louisville, Ky., and raised on Signal Mountain in Tennessee, found success in several business ventures, including financial services and owning a chain of dry cleaners. He puts most of his energy toward managing their portfolio of real estate and overseeing operations of the Lowe Law Firm. My is the first of her Vietnamese family born in the United States, beating the odds after growing up in poverty-stricken neighbors of New Orleans before earning her J.D. from Loyola Law School, passing the Louisiana State Bar, and establishing The Lowe Law Firm. Their two beautiful children, Woods, 4, and Fallon, 2, can usually be found by their side wherever they may be in the world.

About “Below Deck Mediterranean” Season 5

Voyaging around the beautiful island of Mallorca, Spain, on the 184-foot mega-yacht “The Wellington,” the largest in Below Deck history, the crew encounters choppy waters trying to navigate everything from heartbreaks and power struggles to challenges with maritime law. As these yachties work to conquer each charter, they struggle to set aside their differences, forcing Captain Sandy to make career-defining decisions that challenge the group in more ways than one. For more information on the show, please visit bravotv.com/below-deck-mediterranean.