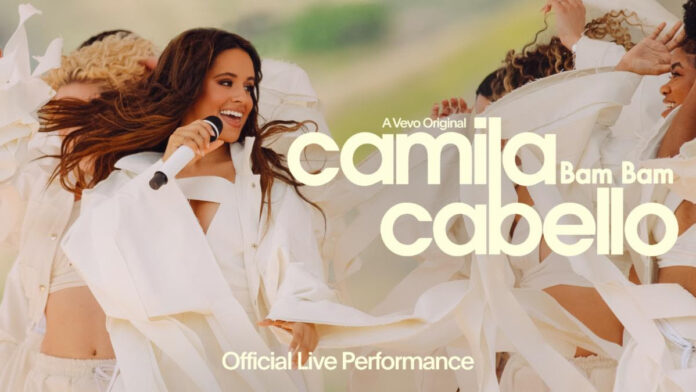 Official Live Performances are the flagship original content for Vevo, working with the biggest names in music – they are the result of close creative collaboration with artists and their teams, resulting in a series of very special exclusive performances. Specifically tailored creatives meant to fit the vision of each individual artist chosen, these performances connect artists with their global audience of fans adding to their visual library.

“Having the ability to build this futuristic world with an artist of Camila’s caliber was such a privilege,” says JP Evangelista, Vevo’s SVP of Content, Programming & Marketing, “With a series that so heavily relies on teamwork, Camila was a dream collaborator with a clear creative vision. The final product was better than we ever could have imagined, and we’re beyond proud to present this series to her fans.”

Camila worked closely with Vevo’s team to create a custom set focused on joy, movement, and freedom. “Bam Bam” starts with Camila in the middle of a valley, surrounded by rolling hills backed by a clear blue sky. Clad in all white, she makes her way through the oasis, connecting with her similarly dressed backing dancers over to a round stage. The stage lays in the middle of the pasture, lit overhead by a large levitating light source, and taken over by nature in a surreal yet undone fashion. Branches, leaves, and bushes have crawled through this surreal world and blended into beautiful oneness.

Vevo is the world’s leading music video network, connecting an ever-growing global audience to high-quality music video content for more than a decade. Founded by Universal Music Group and Sony Music Entertainment in 2009, Vevo offers fans worldwide a vast array of premium content to choose from, showcasing official music videos alongside a constantly developing lineup of live performances and innovative original programming. From top superstars to rising new talents, Vevo brings incomparable cross-promotional support to artists across the musical spectrum, at every stage of their careers.

Vevo has consistently evolved over the past decade to lead within today’s ever-changing media landscape, embracing partnerships with a number of leading distribution platforms to deliver extraordinary content within ad-supported environments. With more than 25B views across television, desktop, and mobile devices each month, Vevo brings music videos to the world – when, where, and how fans want them.

Kindred The Family Soul With New Music and Creator Platform