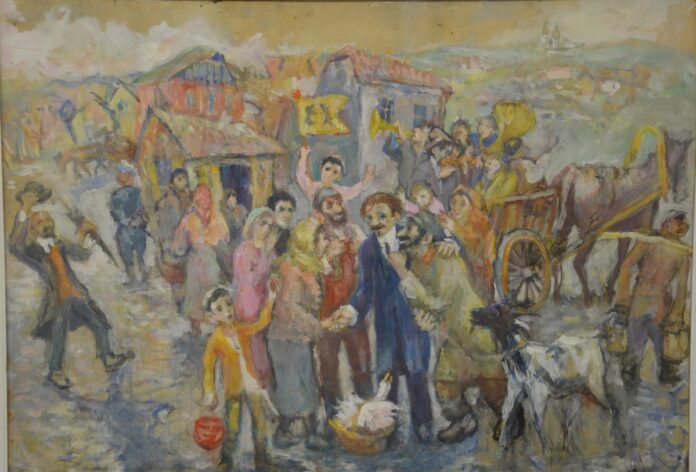 Holocaust Museum Los Angeles presents the debut of “Recalling a Lost World: David Labkovski Brings the Stories of Sholem Aleichem to Life,” a new virtual exhibit that features Labkovski’s vibrant illustrations inspired by the stories of leading Yiddish author and playwright Sholem Aleichem. The virtual exhibit, the museum’s first of its kind, opens Oct. 28th and will run through December 2020.

Sholem Aleichem (1859-1916), a writer referred to as the “Jewish Mark Twain,” penned stories that portrayed daily Jewish life in late 19th and early 20th century Central and Eastern Europe. Aleichem’s celebrated tales of Tevye the Dairyman were the basis for the Tony award-winning musical, “Fiddler on the Roof,” which debuted in 1964 and remains widely performed today.

David Labkovski (1906-1991) used oils, pencils, and watercolor to capture Aleichem’s stories that resonated with his stories of childhood before the Holocaust. Raised in Vilna, Lithuania, and subsequently imprisoned in a Siberian Gulag, he returned to his hometown after World War II to find a city and a Jewish community decimated by the war. Labkovski, wanting to commemorate the world that existed before the Nazis, looked to Aleichem as his muse. Although the two men never met, in capturing the stories and characters of Aleichem, Labkovski also captured his childhood.

“Sholem Aleichem uses stories as a tool to commemorate the past while David Labkovski uses art. The fusing of these two mediums provides a powerful instrument to educate and engage audiences,“ said Leora Raikin, founder and executive director of the David Labkovski Project. “The universal language of art transcends language and time.”

Stephanie Wolfson, curator of the exhibit and director of education for the David Labkovski project added, “The genius of David Labkovski is his ability to express narrative, emotion and historical context with his paintbrush, conveying his intense emotional attachment to the past. When you engage through art, you are able to reach all levels of learners.”

“We’re excited to partner with the David Labkovski project on our very first virtual exhibit. While our focus is to teach the history and lessons of the Holocaust, we believe in the importance of showing the vibrant Jewish culture before the war in order to demonstrate what was lost. This exhibit is special in reminding us that Jewish life flourished before the horrors of the war and has flourished since,” said Beth Kean, CEO at Holocaust Museum LA. “The innovative, virtual setting of this exhibit allows us to welcome visitors from around the world to enjoy Labkovksi’s stunning pieces.”

Holocaust Museum LA is the first survivor-founded Holocaust museum in the United States. Since 1961, the museum has provided free Holocaust education to students and visitors from across Los Angeles, the United States, and the world, fulfilling the mission of the founding Holocaust survivors to commemorate, educate and inspire. The museum is open seven days a week; because the founding survivors insisted that no visitors ever be turned away from learning about the Holocaust for lack of an entry fee, museum admission is always free.

The David Labkovski Project advances knowledge of the Holocaust through the art of Labkovski. Utilizing his history, paintings, and sketches, the project emphasizes tolerance, acceptance, and the importance of bearing witness to history through lectures, workshops, exhibits, and a multidisciplinary project-based curriculum. For more information, please visit davidlabkovskiproject.org and holocaustmuseumla.org/david-labkovski.