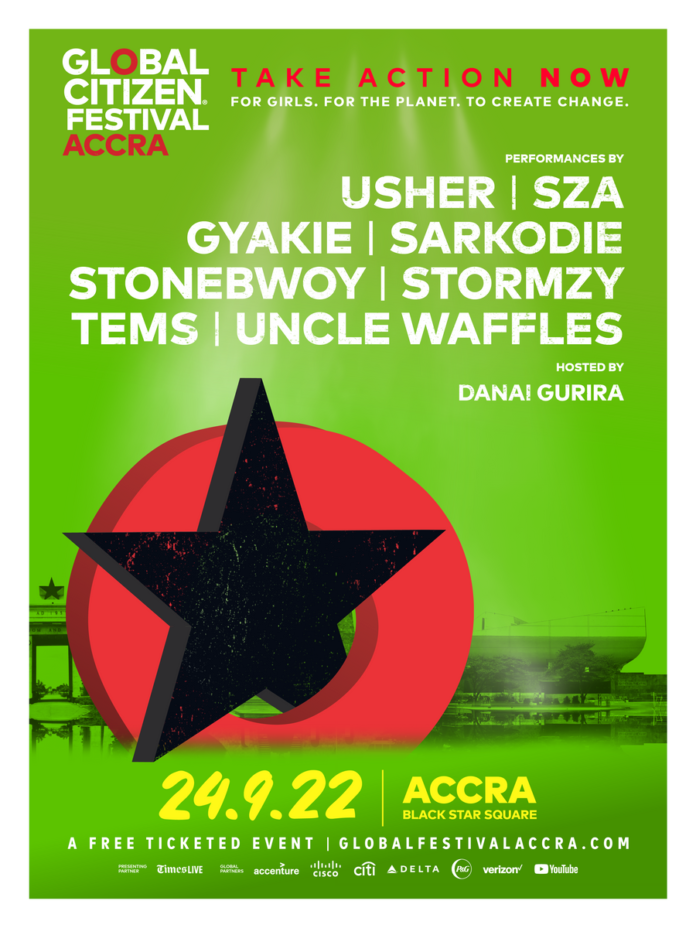 The producers and contributors behind this year’s Global Citizen Festival, occurring this Saturday (Sept. 24), are on a mission to raise money to provide funding to Africa’s farmers, invest in the futures of young women everywhere, and contribute urgent financial relief funds.

As the 10th anniversary of the event, this year’s festival is anticipated to reach national and international audiences alike as it will be live streamed on YouTube, Twitter, Amazon Music, Hulu, and additional platforms, from Accra, Ghana, and New York’s Central Park.

As the Global Citizen Festival is taking place in two locations, each part venue features a unique and impressive lineup of performers. The Accra stage will host such names as Uncle Waffles, Usher, SZA, Stormzy, Sarkodie, Stonebwoy, and Tems. Danai Gurira, award-winning actor, activist, and playwright will act as the host of the Accra event.

On New York’s Central Park stage, Charlie Puth, Metallica, The Jonas Brothers, Maneskin, and Mariah Carey are expected to perform alongside several other impressive acts. Actor and activist, Billy Porter is also scheduled to perform at New York’s festival and had this to say about the event:

“I want to keep changing the world in as many ways as I can, and this year we’re taking it to the next level. It’s been an extraordinary privilege to work with Global Citizen over the past few years, and I’m so excited to be joining the incredible lineup performing in Central Park for the festival’s 10th anniversary.”

As an event aimed at philanthropy, the 2022 Global Citizen Festival is intended to raise awareness about social and environmental issues and encourage major organizations and foundations to take the stage and announce new commitments to supporting the organization’s noble efforts. Specifically, the foundation hopes to raise the funds required to invest $600 million into the future of women and girls, close the annual $10 billion climate financing shortfall, deliver $500 million to help African farmers respond to the global food crisis, and reallocating IMF Special Drawing Rights to provide urgent economic support.

“The impact the Global Citizen movement has had on the most pressing issues facing humanity over the last 10 years would not be possible without the ongoing support of the world’s biggest artists and entertainers,” said Katie Hill, Global Citizen’s Senior Vice Principle, and Head of Music, Entertainment and Artist Relations. “Seeing artists including Usher, Metallica, Danai Gurira, Priyanka Chopra Jonas, Billy Porter and Rachel Brosnahan returning to the Global Citizen stage and continuing to use their platforms and energy to drive impact for the mission to end extreme poverty is truly inspiring. We are grateful to all the artists, hosts, and presenters joining us on September 24th in Accra and New York City and look forward to inspire action and long-lasting impact across the globe.”

To learn more about Global Citizen and this year’s festival, visit the organization’s website and tune into the event this weekend on major streaming platforms.