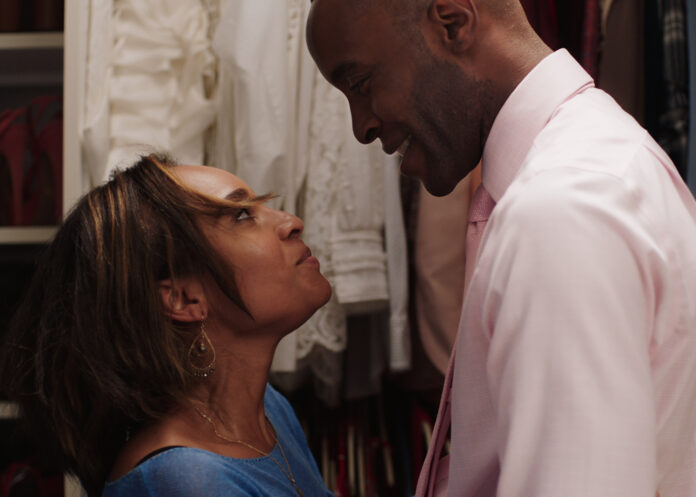 The new holiday film A New York Christmas Wedding, written, produced, directed, and starred in by Otoja Abit, is a new Christmas themed LGBTQ+ romance premiering on Netflix. The story follows the life of Jennifer Ortiz (Nia Fairweather) while preparing for her Christmas wedding to David Wilks (Otoja Abit). She’s visited by her guardian angel (Cooper Koch) and shown what her life could’ve been if she didn’t deny her true feelings for her best friend (Adriana DeMeo). Implementing elements from It’s A Wonderful Life and modern conflicts regarding love, religion, and marriage, ANYCW tells a beautiful story about love and acceptance at Christmas time.

Otoja Abit is best known for his award-winning short Jitters, which he too, acted, wrote, and directed. His past credits also include HBO’s The Night of, NBC’s Blackish, and Marvel’s The Defenders. ENSPIRE Magazine had the opportunity to speak with Abit:

As a supporter of the LGBTQ+ community, it is not surprising that you would write and direct a film that focuses on the struggles and acceptance of its members. What inspired the creation of A New York Christmas Wedding?

“A New York Christmas Wedding was a personal story that I always wanted to share. My debut short film, Jitters, gained attention for its universal message. It was also gaining attention for the normalization of a same-sex wedding in a church. The production company, Conglomerate  Media, enjoyed Jitters and had keen thoughts on the need for similar thematic holiday stories as a feature length narrative. We had a meeting, and they wanted four things: A wedding in a church. A same-sex couple. New York City. And Christmas.

For my first feature, I instantly wanted to expand Jitters because of its established success. But Jitters only works as a  short because of the immediacy of a looming decision. It was a tight story, and to grow/mold it to something it wasn’t didn’t feel right. So I created new characters, modern-day obstacles with similar themes, and all the while having the central exploration of love and equality.”

As a writer/director/actor for this film, what was your favorite part of the filming process?

“I loved each part of the process equally. When you’re a writer, it’s one thing. In the beginning stages, it’s fun, creative, and the majority of the time can be lonely. It was such a benefit shaping the story with our producer, Kory Apton.

As a director, it’s another thing— it’s extremely encompassing. It’s the constant feeling of rolling a cement ball up a hill, and with each yard of progress, the difficulty is to celebrate when you know there’s so much more to go.

As an actor, it’s the obvious thing— it’s all fun. Showing up and playing with the amazing actors we cast— who I was fortunate enough to know as friends. That is an experience I’ll never forget.

Working on an indie film, I had a say on the team we built. That’s something I’ll cherish. But my favorite part of the process would be producing. This project is the first feature film for our production company, Willful Productions. It’s extremely rewarding to forego all the pains and tribulations of production and have a final product that touches people in a personal way. Would I wear so many hats on the next one?  No… I hope not. But whatever to get the job done.”

Working on an indie film, I had a say on the team we built. That’s something I’ll cherish. But my favorite part of the process would be producing. This project is the first feature film for our production company, Willful Productions. It’s extremely rewarding to forego all the pains and tribulations of production and have a final product that touches people in a personal way. Would I wear so many hats on the next one?  No… I hope not. But whatever to get the job done.”

What inspired you to pursue your passion for filmmaking? What advice do you have for others who hope to pursue filmmaking?

“I have always had a passion for the arts. Growing up in New York City, artistic outlets weren’t visible.  So dreams were thought of but with no real path to attain them. When I graduated from college, the economy was down, and there was immense difficulty finding entry-level jobs. I had a friend blatantly tell me that I had forty years of my life to work— we all do. Do what you want to do now. I thought about those words and realized, for me, that was filmmaking. I pursued from the bottom with no connections and never looked back. There’s been incremental progress, and to now have debut feature on Netflix, developed from a short film which was intended as a showcase of talent… I couldn’t be prouder.

I would say to people who want to pursue filmmaking; Write. Tell your story and be sure that express honestly whatever is personal and specific to YOU— that is what makes important storytelling. All facets of this business support each other when it comes to storytelling—writing, acting, directing, producing, etc. Get involved, take risks, and be sure to say YES. Opportunities come when you’re involved.”

What do you hope the audience takes away from this film?

“I hope audiences are able to reflect on their lives and relate to our characters’ journeys.

My favorite part of the film is Father Kelly’s conflict. As adults, we all have experienced differences of opinion. But to be a priest who has seen these young women grow into stand up adults and because they love each other feel hesitation to support them is riveting to me. To have Gabby tell Father Kelly, “We feel welcome but not equal.” That line expresses what a holiday story like ours is. People are welcoming different styles and diversity, but when it comes to the comparisons of wanting what is “normal,” it is baffling. We’re a different film that took risks. A film studio wouldn’t back from a first-time writer/director but, Conglomerate Media independently took the chance.

So if you’re a being with a beating heart, the feeling of love and care is innately in you. Everyone may not be holiday people— I understand that. But I do know, for a fact, an audience knows what a love story feels like. To have A New York Christmas Wedding deal with topics in a heartfelt way, I do hope they realize our intention. And I do hope that more diverse stories continue to be told. Unapologetically. It’s a conversation worth having… and luckily for us, we were first at that table with our unique thing to say.”

How has being from New York influenced this film and other projects you have participated in?

“Being from New York and a child of immigrant parents always has been the guiding force in shaping me and my choices. Growing up, my household was African. Yet my experiences in school and with the outside world were American. I saw the world differently, which ultimately influenced the way I write or express myself visually.

The three projects Willful Productions has made have all been NYC-based. Jitters, A New York Christmas Wedding, and a music video “Strong,”  by the amazingly talented artist Queen V. With each project, we intended to ignore stereotypes and tell universal stories that inspire.”

Do you have any other projects we can look forward to?

“It’s such an exciting time with the Netflix release and the great response to this film. I look forward to embracing all the conversations as there are weeks left in the holiday season. But on the flip side, Willful Productions is proudly going to market with our current slate of developed feature scripts, anthology series, and documentaries.

We’re also releasing an EP of our own musical artist, Kelsey Madsen. Kelsey is a dear friend and knock out talent who sings the beautiful end-credit song, “I heard the bells on Christmas Day.” Stay tuned for it.”

A New York Christmas Wedding is a wonderful film that challenges and urges its viewers to reconsider their definition of love by showing love does not have one face, but many, and every single one is beautiful.

To keep up with Otoja Abit and his future projects, connect with him on: