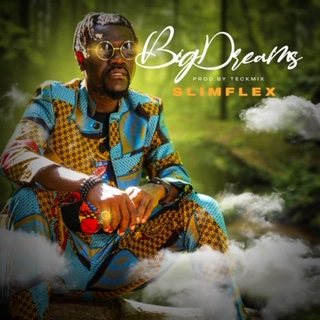 Slim Flex is pushing the boundaries of the music industry with his unique style and passion for empowering others. His newest single, “Big Dreams,” has come to life with its accompanying visual, and is set to inspire thousands through a powerful Afrobeat sound and strong messages of perseverance and self-purpose.

Slim Flex’s roots in music and performing started from a young age, as the artist recalls finding a sense of home at his church in Ghana, West Africa. Deeply connected to the feeling of inspiring others from a stage, he was spurred to share this sense of connectedness to wider audiences. In the early 2000s, Flex moved to Toronto, Canada to build a foundation for his career, introducing his unique blend of Afro-beats and Western Music to North America.

In 2018, Flex partnered with Diet Monkey Entertainment Inc., which allowed his music to soar to a global level and reach new commercial heights. Together, they produced “Gifted” in 2019, Flex’s third studio album that celebrates the sharing of the Caribbean and pop music with audiences of all backgrounds. Flex has also made his producing debut with the track “I’m A Boss,” which reached #1 on the Canadian Reggae charts with his release “Higher,” and collaborated with esteemed artists Kirk Diamond, Patapaa, and EL, and Ghanaian producer Apya.

Flex’s success with music on YouTube, coupled with his commanding stage presence and powerful vocals, spurred him to embark on a large music tour with other Canadian and global artists. The artist has found himself amidst cheering crowds on the stages of Afro Fest, TD Irie Music Festival, TDOT Fest, and African All-Star Music Festival, among others.

Although COVID-19 has offered its fair share of hurdles, Flex has stayed true to his music throughout. His newest single “Big Dreams” has come to life with a vivid musical video; together, they encourage listeners to pursue their dreams and not feel confined by their current situations. To put this message into action, Flex plans to hold a charity live stream concert on December 19th, at 8:30 PM EST. Featuring 8-year-old pop star Jazmine (Jazzy) Headley, the event will donate all its proceeds to The Hospital for Sick Children.

Through his success in the music industry, Flex credits his supportive fanbase as his main source of motivation. “The most rewarding part of performing my music is the response by the audience,” proclaims the artist. He urges aspiring young musicians to follow their ambitions and “never settle for less. . . push yourself as the only way to attract support.”

The Mavericks Beyond Music: The Shindellas